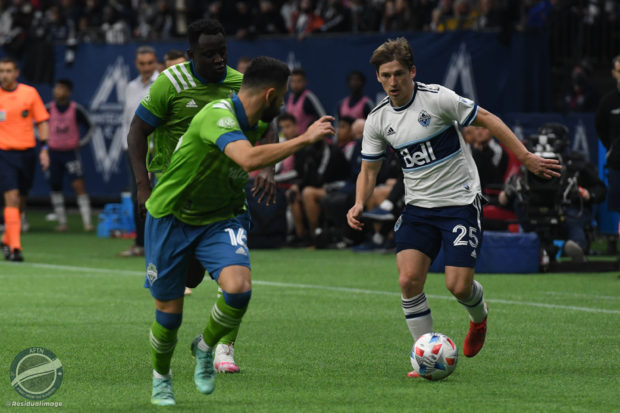 Well, what a difference 45 minutes can make. In the first half of Wednesday night’s match against the Galaxy, the Whitecaps looked overmatched and like they were about to suffer another loss on this dreary end-of-season stretch. Then, suddenly, they scored. Then they scored again. Then, just for fun, they scored again, and won 3-0.

This Californian capitulation was unexpected and also a moment of proper entertainment that left you wondering where the heck this version of the ‘Caps have been, as it’s mostly disappeared since the Canadian Championship final. The win pushed the ‘Caps back up to 11th in the West and meant that they have not yet been officially eliminated from playoff contention – although they’re still six points back with just three matches remaining.

After Saturday night the ‘Caps will have two weeks until their next match. It’s a big one on deck to close this busy week: a Cascadia clash against Seattle. The ‘Caps can pull back ahead of the Sounders with a win, and if they do so it’ll be their first back-to-back wins since June.

The formation against the Galaxy was “new” but also quite reminiscent of the old. The 4-2-2-2 they nominally lined up in shifted to a 3-4-3 quite easily, with Pedro Vite dropping quite deep at times and Luis Martins making plenty of runs down the left flank while Jake Nerwinski stayed more at home.

Martins proved to be an interesting addition to the lineup. With Cristián Gutiérrez in exile, Martins is the only left-footed defender available and showed the value in having one out there when he whipped in a great delivery that Pedro Vite tapped in at the back post. Vite finally scoring his first goal for the club has to have felt good for him, and hopefully can be something that sparks him in these final couple games and into next year.

Andrés Cubas was immense on Wednesday, frustrating the Galaxy (in particular Riqui Puig) and showed just how good he can be when he’s fully on his game. Figuring who is best to slot next to him remains an issue, as Leo Owusu put in just an alright performance next to him in midfield. The other options are Sebastian Berhalter and Russell Teibert, who have both been quite up and down in their recent appearances, but the former is now suspended for yellow card accumulation. Michael Baldisimo has only played once in the last four months, while Janio Bikel has yet to play at all since returning from Italy.

Unless Vanni Sartini elects to use Alessandro Schöpf as more of a number eight, then we’ll continue to cycle through one of Owusu/Berhalter/Teibert in the middle of the park, a carousel that has been in place all year to uninspiring results most of the time. If this wasn’t the team’s third match in a week then you might expect Sartini to name an unchanged XI, but there will be some tired legs out there. Although perhaps we’ve reached the point where that’ll simply be shrugged off when it comes to team selection.

Looking at the visitors, the Sounders are in a dogfight to try and avoid missing the playoffs for the very first time in their MLS era. They were reeling after a terrible month of August that saw them pick up just four points in six matches, but they’ve kept themselves alive with back-to-back wins against Houston and Austin that brings them back to four points behind the red line with a match in hand.

The ‘Caps have not had much recent success against Seattle, in fact they haven’t beaten them since all the way back in April of 2017 when Fredy Montero scored a brace at BC Place in a 2-1 victory. Montero, of course, is now back in Seattle and the previous meeting between the two sides this season was a 4-0 drubbing by the hosts at Lumen Field back in the summer.

This match has no bearing on Cascadia Cup results, as Portland has already won the trophy for this year. It’s also unlikely to matter for the Whitecaps in terms of their playoff chances even if they do manage to pull out the win. There’s the chance that it could, however, and because of that we now need to hold onto that hope until it’s extinguished.