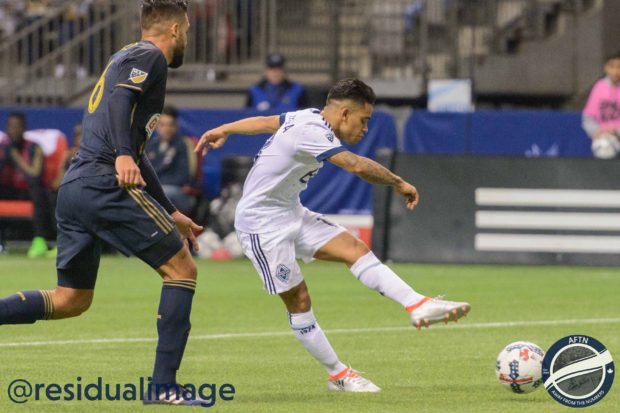 Vancouver Whitecaps were frozen off the scoresheet by Philadelphia Union as the 2017 MLS season kicked off with a lacklustre scoreless draw that saw both sides muster only six shots on target between them and only one of those came from the ‘Caps.

The Whitecaps were unable to carry the momentum from their CONCACAF Champions League win over New York Red Bulls on Thursday night and had to settle for the single point, as their attack suffered from a lack of telling final balls and a pure number 10 on the pitch to deliver them.

Both David Ousted and Andre Blake picked up clean sheets but neither were really tested enough to earn the honour.

Vancouver showed attacking spurts, but apart from a Cristian Techera shot that was pulled wide, the Whitecaps produced little of note in a first half that produced peaks and troughs actionwise.

The Whitecaps had their best chance on the night in the second half when Jordan Harvey’s superbly struck volley, off a corner kick, was cleared off the line by defender Keegan Rosenberry.

But that was it.

There were a number of bright spots for the home side with Alphonso Davies continuing with his strong play in the attack as well as the return of Christian Dean from a wasted 2016 season that he spent on the shelf with multiple injuries. Those two were the standouts in an subpar team performance that was so different from that of a few days earlier.

The Whitecaps will now head to Northern California as they look for their first win against the San Jose Earthquakes. 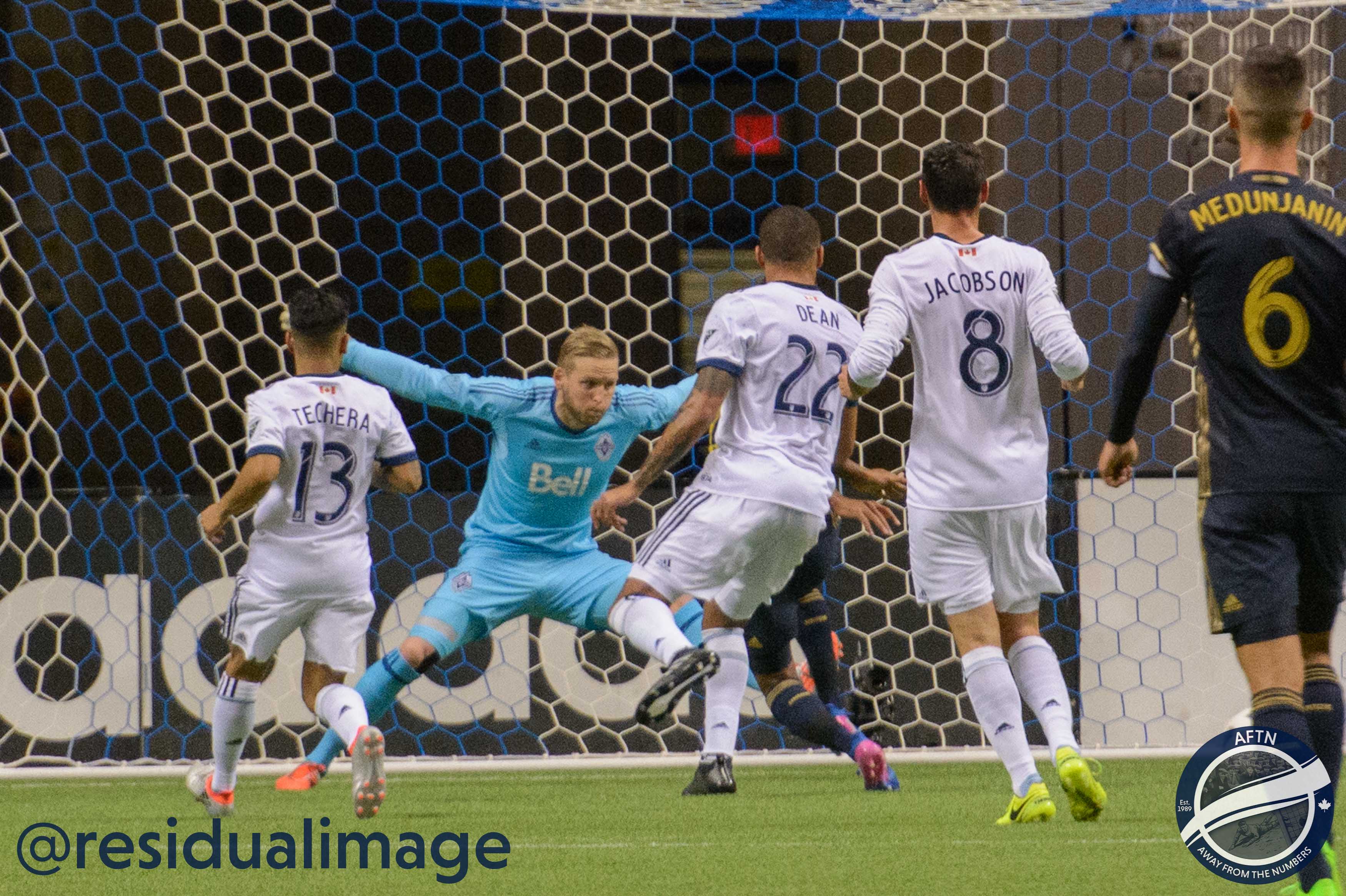 On tonight’s result and keeping two cleans sheets in the space of four days:

“Excellent performance, first of all, I’ve got to say a massive well-done to the guys in there. They’re running on empty, some of the players, especially the ones who played the full 90 minutes. But we didn’t look at all in danger and last year we would’ve probably conceded. So a lot of positives on the defensive side, I thought we were strong. Christian Dean stepped in for the first time and he was absolutely excellent and deserves a lot of credit. But we weren’t able to take one of our chances is the unfortunate thing, but lots of positives.”

“He’s been very patient, when we drafted him, he’s got talent we know that. Last year was an unfortunate season for him because he went through a lot physically and mentally. The injuries he had, he had the same preseason this year as he did last year, I think the week before he got injured. And he went through another injury and then he lost his father which is never easy to deal with. So it was a tough year and I’m pleased for him, for him to come in, he looked very mature, very polished and he got stronger as the game went on, and I thought him and Tim Parker were excellent together so he should be proud of himself today.”

“I think you’re spot on. Ideally we would’ve wanted Christian Bolaños or Yordy Reyna to be on the sidelines but they aren’t. We played two forwards today, and tried to get Kekuta [Manneh] in that little pocket. We got into good areas but we didn’t have the final execution of the pass which is disappointing. But on another day, we need to take our chance. Jordan Harvey, on another day, might have scored. But lots of positives, lots of things we need to work on, but what’s a good thing is a good clean sheet and another solid performance. Congratulations to the guys, great effort over three days.”

On his first appearance in more than a year:

“It felt really good. This was my first time in an actual game since a year and a half. It felt really great to be back out there. Before the game, I had butterflies for sure. That’s a good thing, my dad always said, ‘If you don’t feel it, you don’t care.’ I thought it was a good thing that I felt that.”

On what pushed him past adversities:

“It’s been a really long year with the three injuries. The support of the coaching staff, especially of my teammates, my family for sure, definitely my mom. She has been super supportive with the passing of my dad. She’s been there since day one. I’ve been in dark places so just having people that are supportive kept me going.”

On getting to start in the season opener:

“I came in the season aiming for Kendall’s job. That’s what you have to do, right? Everybody wants to play. Cole [Seiler] has been playing really well as well. So you never really know who’s going to play. But I really enjoyed playing the first game in front of our home fans, especially in the opener.”

“I think it was a good result. I think we put on a good showing for our first game at home. I think defensively we were very sound. I think we’re hard to break down. We didn’t give up many chances. On our offensive side, we created chances. We just have to keep going with those chances and hopefully get a goal out of it.”

On the offensive side:

“I think we’re dangerous. I think we showed really good glimpses of creating good chances. Sometimes, it’s just about getting that final ball to be exact.”

“It’s great to see him back. He had a long year last year with injuries and some other stuff going on. It’s a big step for him to come back and step into the team and do what we expect out of him. Obviously, he had a great game tonight.”

On getting the clean sheet:

“I thought that there were two very organized teams tonight that kind of cancelled each other out a little bit. Chances were few and far between. I’m happy for my group to come to a very difficult place and get a point. Again, I thought we were organized. We conceded one shot on goal, which is something to be proud of for the group, something to build on as we move towards our home opener against Toronto on Saturday. I think overall, it was a fair result, for each team to get a point on the night. Two good teams that went at it and we’re happy to go home with a point.”

On putting weight on shoulders of young players:

“You don’t want to put too much pressure on young players. Alphonso [Davies] is not my player so I won’t speak too much on him. He’s incredible. Basically the vast majority of my weeks leading up to this was spent on how to shut down a 16-year old kid. That’s a compliment. He’s a heck of a player. To see him run in person, how effortless it is, how powerful he is, and then to have the feet that he does – I don’t want to get carried away but he’s got a great future. That’s a credit to the coach too. Carl has to put young guys on the field, it takes guts. It’s very easy for coaches to say it, but very few actually have the courage to do it. Carl is at the forefront of that in this league. You have to believe in young players. If Derrick [Jones] is able to play for our national team in the future too, we want to be a club that develops young players, brings them all the way through our club, and for them to get to wear the jersey for the United States. That’s the highest honour there is in soccer in our country. Does every club in this league approach it that way? No, but at the same time, that’s what our goal is. Derrick did a great job but you do have to be careful. It’s only one game and you can’t get carried away. If you put too much pressure on these kids, it’s not fair. They’re important, and they’re getting better each and every week. But I’ve said before, in soccer, there’s not too young or too old, there’s only good and bad, and they’re good players that deserve to be on the field. They’re dominating games so it was good to see tonight.”

“From what I saw in the game, my opinion may be biased, I thought he was the best player on the field, for both teams. I’m very happy with Derrick. I thought he was excellent. He broke up a ton of plays defensively. Of course, as a coach who’s been around there for a long time, I was nervous for him on his debut. The first player in our club’s history to go through academy to Bethlehem Steele to the first team. From that standpoint, a proud moment for our club. I give him a ton of credit, he’s worked hard in the preseason. He’s earned this opportunity and he didn’t just blend in there tonight, he left a real mark on the game and I’m really happy for him.”

“It felt great. I had a lot of fun out there. The atmosphere was nice.”

On playing with Haris Medunjanin:

“He just told me to go out there and have fun. He teaches me a lot at training. He talks to me all the time. I listen to him because he’s played a lot. I just follow his footsteps.”

On Jim Curtin’s instructions before the match:

“He just told me to have fun and play hard.”

On being a Homegrown player:

“I don’t think it’s easy. You have to earn it, work hard, and earn your spot. I just have to keep going.”

“I’m glad to be back home. It’s really nice to get my first MLS game in. Get out there with the boys and grab a point on the road, and go back and get ready for the home opener next week.”

On adjusting to the style of play:

“I think I can adapt to all kinds of styles. I can slow it up when I need to. I can play fast when I need to. This league being a fast one, I think it’s a great opportunity for me too to help the team, in terms of getting into spaces, and getting behind to create.”

On his fitness level:

“I’m feeling a lot better. Between the travel in the preseason and the nicks I had here and there, it was a bit difficult to getting to game fitness. Today definitely helped a lot and I look forward to gradually getting back into it with the boys. It won’t take too long for me to get back to full fitness. Hopefully, I’ll be ready again next week to get some more minutes and keep working at it.”