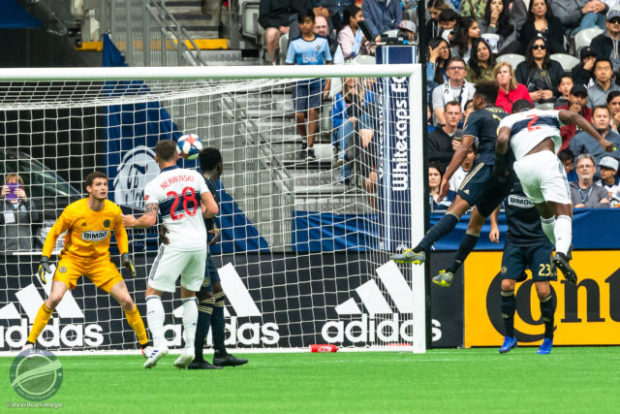 BC Place has been far from being a fortress for Vancouver Whitecaps in recent seasons. Any hopes that this would change under the leadership of Marc Dos Santos have so far proved unfounded and the ‘Caps’ poor home form continued on Saturday afternoon as they threw away two more points against an understrength Philadelphia Union side, making it just five points from their five home matches so far.

Doneil Henry’s powerful first half header was cancelled out by Kacper Przybylko’s equaliser midway through the second half in a rare game where Vancouver had the better of possession, shots, and other key aspects of the match but had to settle for a 1-1 draw.

Dos Santos went back to the team that secured the Whitecaps’ first win of the season ten days ago at home to LAFC and they started strongly, taking the game to a visiting side who were missing some key players.

It was the Union who came closest to opening the scoring, however, with PC clearing a flicked on corner off the line nine minutes in.

The Whitecaps hit back and Yordy Reyna crashed a shot off the right post five minutes later.

The ‘Caps were looking the more dangerous team and with the stadium part emptied after another walkout protest by supporters, they finally got their reward four minutes before half time when Henry rose superbly to powerfully head home an Ali Adnan corner to send Vancouver into half time with the lead.

Doneil Henry powers home a corner from Ali Adnan, who records his first assist in @MLS.

It was a lead the ‘Caps thought they’d doubled ten minutes into the second half when Reyna ran onto a through ball, bore down on goal, and chipped Union keeper Matt Freese with a nice finish.

The Whitecaps players and supporters celebrated, unaware that Reyna was offside and referee Chris Penso was chalking the goal off.

Philadelphia were now starting to look more of a threat and they tied things up in the 65th minute when Jamiro Monteriro’s foot poked the ball away from Adnan, straight into the path of Pryzbylko who ran in on goal and finished with aplomb past Max Crepeau to make it 1-1.

It was the German’s first MLS goal in his first MLS start and although the Whitecaps will feel they shouldn’t have lost the goal they way they did, it was a nice finish.

66' The big man up top hits the gas past the defense and tucks the ball inside the far post. Quite the debut for Kacper!#DOOP | #VANvPHI 1-1 pic.twitter.com/jipZeGoMVE

Both teams created some chances over the remainder of the game, with ‘Caps sub Joaquin Ardaiz coming closest with a lovely shot from a tight angle that was cleared off the line shortly after the equalising goal, but there was to be know more goals and Vancouver were left disappointed and feeling that it was certainly two points thrown away as opposed to one point gained.

The draw sees the Whitecaps drop to second bottom of the West after Portland’s big win over Toronto this afternoon. They’re still very much in touch with the playoff places, just four points away at the time of writing this. It’s just that they don’t feel like a team right now that will be there come the end of the season the way they are currently playing.

Next up could be a confidence booster or their worst nightmare as they travel to play the only team worse than them in the West right now, the Colorado Rapids. 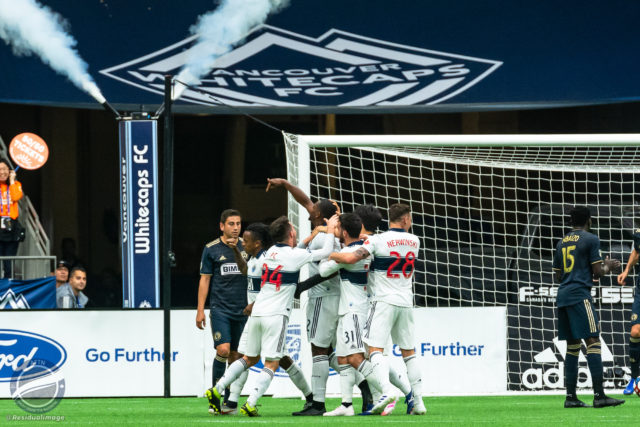 “We did enough to win the game, we created enough opportunites, but if you don’t finish your chances, you’re always playing on the edge. In this league the teams are good, everybody has some qualities. So you can’t play like that all the time in the edge. I felt that we did enough in the 90 minutes overall to win the game and today we lost two points.”

“Yordy does everything that I think a number nine should do, everything. He deserves the goal, but it’s an example for the other number nines also to look at. When he doesn’t have the ball he’s very loyal to the team. He runs, he steps, he presses, not only the centre back but if their defensive midfielder has the ball, he turns and he comes in and presses ther. He’s always in movement, always trying to make important runs. Then again he needs to be sharper when he’s around the box, but he knows that, he’s working on it. Today he deserved a goal, it’s very sad that he had to come out because I felt that we were good in the game. Coming out it forced a substitution, and we lost a bit of [momentum] once he came off.”

On the way the team is playing:

“I think that that the concept that we want to play, the organization of the team, the understanding of the players is all there. We have to grow offensively and that’s a secret for no one, it’s a part of the game that needs to grow and we have to be better…”

“We dominated them today and for just some reason or another luck just isn’t going our way right now. This was one of our best performances all year long.”

On better passing accuracy in this match:

“It shows that we’re building in our philosophy and we’re building in our identity. We are becoming the team that we are saying that we want to be, a team that possesses the ball, a team that is willing to play out from the back, and we showed all of that today. We were very positive in our passing, we created a number of chances, it’s just the final third in both ends that we need to clean up and put attention to detail on and we’ll start getting three points. This was a missed opportunity for us, this a game where we all felt we should have three points.”

On his own performance:

“We’re frustrated. We did everything we needed to do to get to that final point to get that second goal and we didn’t do it, and we gave up one mistake and they capitalized on it, and that’s just how football goes sometimes.”

“Overall, all things considered, the amount of guys that were missing, the travel, playing against a good Vancouver team, I thought that the effort was very good. We got a lot of answers from a lot of players today that stepped up in a big way. This group has been shorthanded now week in and week out, and different guys have responded with big performances. I can’t say enough how proud I am of the group. If we get greedy maybe we could have stole a second goal at the end, but I think a draw is a fair result.”

On a busy schedule:

“We have a long travel back now, then we have to recover quickly for two really important home games. So we’ve set ourselves up now for those. It’s been a very good start to the season for this group. We’ve challenged them to take a step forward and be one of the teams that’s challenging for that home game that’s so important. And the players to a man have really stepped up.”

On players stepping up:

“I could go through the names. Each and every guy, Matt Freese stepping up for a 20-year-old, looking very calm and composed back there in a hostile environment. The performance from Gaddis and Mbaizo, the centre backs did a decent job other than the free kick. The midfield was solid and stable, and obviously Kacper a big contribution for him. So every guy has stepped up in a big way, we’ve used our whole roster. It’s been some challenging situations for us on and off the field this year, suspensions, family things, injuries, but really I give full credit to the players and the strength of this roster that we have.”

“When I scored the goal, there was no feeling, but I just wanted to continue and to win the game, and to score the next goal.”

On getting the chance to start:

On a busy schedule coming up:

“Not everyone can play, and not everyone can play in all these big games, because it’s very tough to always play 90 minutes. We need to try always to do the best pressing, so we also need people to get this chance on the bench to get some minutes, and hopefully we will also rock it on Wednesday.”

On his first career start:

“It felt really great to be in net. Looking back at the whole game, it was definitely an exciting game. It was fast paced, especially on the turf. That was a pretty even match, both sides getting some chances. I think we played well, it wasn’t our best game, but I’m really happy that we fought back and got the point in the end.”

On his nerves after coming in last match:

“It was a completely different experience, but I wasn’t thinking about it that much, wasn’t that nervous. All of my teammates really took care of me before the game, and they were just like you deserve it, be confident, be happy, smile, and own the moment.”