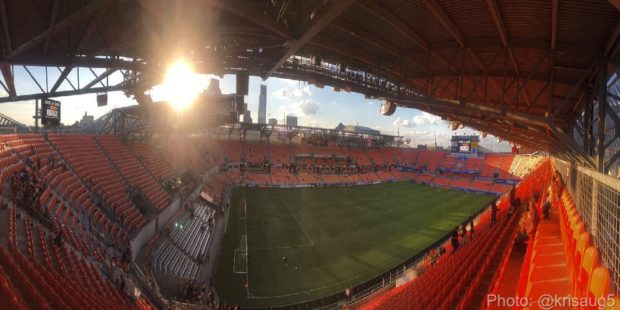 Vancouver Whitecaps are still looking for that first elusive win in Texas.

Heading to a Houston Dynamo side that were unbeaten at home this season and in fine goalscoring form was a daunting task without their hoodoo, and even though the ‘Caps played well and put in a strong performance, a first half goal from Alberth Elis and a second half penalty from Erick Torres put the home side
on easy street.

Brek Shea grabbed a late consolation for Vancouver in a 2-1 defeat, but the ‘Caps couldn’t find the equaliser and now finally head home after a gruelling but surprisingly fruitful road stretch.

Carl Robinson went with an unchanged starting line-up for the fourth straight game, the first time the Whitecaps have done that in their MLS era. The ‘Caps were also looking for three straight away wins for the first time since the summer of 2015, but with never having won in Texas in six previous seasons, that was always going to be a hard ask.

Houston’s dangerous attack was evident just 23 seconds in, when Romell Quioto nearly got onto a cross at the back post but blasted his effort high. Vancouver responded by forcing a couple of corners, before the game settled into a somewhat choppy spell.

It wasn’t to last long, with Elis getting his fifth goal of the season, heading home a fantastic in-swinging cross from Quioto in the 14th minute, from four yards out. A Honduran made goal.

Vancouver had done well up that point, showing some promising forays forward. They tried to keep that going, but the game’s rhythm was being severely disrupted by the number of cheap fouls the home side were giving up.

The ‘Caps enjoyed a lot of the ball, but a flashing Tim Parker header that flew over, and a Christian Bolanos shot that was saved at the near post, and was set up by a quick Parker breakaway, was about the sum of what they had to show for it.

It hadn’t been the most exciting end to the half but the second one started way more livelier, and Mauro Manotas should have made it two for Houston five minute, when Jordan Harvey got in a vital challenge to prevent the Colombian from scoring from four yards out.

Vancouver were holding their own but the big turning point for them came in the 67th minute when Kendall Waston knocked Manotas over in the box and referee Fotis Bazakos pointed to the spot. It felt soft, but up stepped Houston’s top scorer Torres, and he sent David Ousted the wrong way to make it 2-0 to the home side.

It was now a mountain to climb for the ‘Caps but to their credit they fought back and substitute Brek Shea powerfully headed home a Bolanos free kick with five minutes remaining to give them some hope.

That’s three in three for Shea, if you included Tigres, and ignore the massive gap inbetween!

The ‘Caps tried to find a second but didn’t really come close, and the Dynamo’s excellent home form continues.

The win puts Houston on the top of the Western Conference standings, for now, but Vancouver can be pleased with how they played at times. It was the first real test of the 4-1-4-1 and it worked in spurts, but didn’t allow enough to be created to really test the Dynamo defence.

Now that they head back home for a couple of matches, it will be interesting to see how Robinson changes the team. But six points from these four tough away games is a very good haul for the ‘Caps to build on.

On the ‘Caps scoring opportunities:

“We actually had clear cut chances today but unfortunately were unable to take them. We scored one late on but we dug ourselves a little bit of a hole with a soft goal in the first half. I think we need to do a little better at that. And obviously a very soft penalty, which we have to take on the chin.

“Listen, there’s an incident in the 47th minute with Fredy Montero in the box and their centre back runs into the back of him. If we had got given that, I would have called that soft. But I think it’s a soft penalty.”

“I just praised the character in there. I thought the second half the boys were outstanding. Great response from being 1-0 down at half time. I thought we did ok in the first half, but we stepped it up a level in the second half. Even when we went 2-0 down, we didn’t drop our heads, we kept going. Brek [Shea] obviously gets another goal and then we have one or two little rallies in the box at the end of the game and we unfortunate not to get the equaliser. Great character shown. Obviously we need to tidy up on certain things and we need to get a bit of luck as we got no luck today.”

How hard is it to play in Houston:

“It’s difficult. It really is. We went to Colorado last week and that’s hard. We know Houston’s a good team. Wilmer’s doing a great job here. I’m delighted for him. He’s a great guy. He’s one of the good guys. It’s always difficult when we come here. I think we went toe to toe with them today, but we were on the wrong end of the result.”

“Definitely it was a tough game with a team that’s being doing very well away, so we knew that from the beginning. They were very organised. They came with a 4-1-4-1 formation that was very solid. We started off well, with intensity, creating options. There were too many fouls called. I didn’t like the fact that too many fouls were called. Some were fouls, but some others were clear that it wasn’t a foul. But it was the way the game went. At the end they came with a set piece, 85th minute, with a foul. Wasn’t a foul. We all know that but it’s just too many fouls. Anyway, that part of the game. It’s not an excuse, but they were good. They create problems, especially in set pieces. They were tall, strong guys. But we had a good game. A solid game. Defensively, we were good. We created options. We have to try and capitalise those options a little better.”