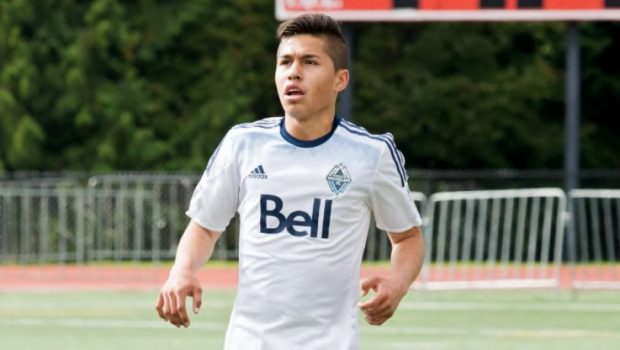 Jose Hernandez made an immediate impact during his first season as a Vancouver Whitecap last year. The young striker led the U16s with 23 goals, including five in the playoffs, and was a pivotal player as the ‘Caps made the USSDA Final Four at that age group for the first time in the program’s history.

There was no doubting that Hernandez was a natural goalscorer. A real prospect, who consistently carves out goalscoring opportunities for himself. But we’ve seen it with a lot of players in the past – they’re good at the younger youth levels, but can they do it as they move to the higher age group and even more so, when they move out of the youth game and into the adult one.

For Hernandez, the first part of that question was answered this season. The 18-year-old made the move up to the U19s, and after a slowish start, found his feet and his form at the higher age group, banging in 22 goals in his 28 regular season appearances for the ‘Caps this season (21 of them starts), leading the team in scoring once again and forming a potent attack alongside Theo Bair and Jefferson Alade.

“So far it been really good,” Hernandez said of his move up to the U19s when AFTN spoke with him at Whitecaps Residency training last week. “I finished the season with 22 goals, but at the start of the season it was kind of challenging. I had to find my rhythm. They were older and stronger playing against 99’s.

“At first I didn’t do so good, but then as the season progressed, our team became a lot closer and closer. It became more of a family I guess. Once that happened, I became closer with my teammates and then goals started to come. Then once I found my rhythm they just kept coming and coming.”

Hernandez has looked strong with the U19s this season, showing a constant improvement as the season has progressed, and the striker feels that he is a much improved and more all-round player than the one we saw a year ago.

“Last year I was more of a different player,” Hernandez mused. “Last year I would mostly just sit in the box and score and score. Also my first touch wasn’t the greatest. Mostly I just wanted to score goals. That was my main thing going into a game. Score. That’s what I wanted to do.

“As of this year, it’s more, okay let’s see what I can do without scoring. Let’s see how good I can work off the ball. Defensively, let’s see how I can assist my teammates this time. Also driving one on one on players. I do that more this year. I’d say I’m more of an impact player than I was last year. Last year I would have just scored in a game. This year I would score, assist, and play a lot better. Impact the game more.”

Like many of the top players in the Whitecaps Residency program in recent years, Hernandez came through the FC Edmonton youth system before making the move west to Vancouver in August 2016. Always a tough choice for a young player to make, but Hernandez felt Vancouver afforded him a better opportunity to develop his game and take him to that next level.

“I came because there’s more of an opportunity to become a pro here than there is in Edmonton,” Hernandez told us. “The Whitecaps were a lot ahead of where FC Edmonton were at that time. There it was a NASL academy, here it’s a MLS academy, which is a lot more challenging and a lot more competitive. I just wanted to do the best for me, so I came here to see how I would do.”

Becoming a professional footballer has long been the dream for the Edmonton native. He still has one year left in the Residency program if he wants, and like all these young talents, a scholarship and the college route is also on the table if he so desires.

But Hernandez is now amongst the first group of Whitecaps Residency players that are faced with a new option for the pro game – the Canadian Premier League. With the league launching next year, and FC Edmonton back from their one year hiatus, the chance to play in his hometown in front of family and friends is now a real option.

And with so many options on the table, Hernandez is keen to take his time and make the right decision. Ultimately though his end goal remains unchanged – to be a pro.

“I haven’t made my decision, but I think I’m probably going to stay [in the Residency] and take a gap year,” Hernandez told us. “It excites me a lot, knowing that there’s a second opportunity with the CPL now. But right now, I’m looking for a MLS contract, that’s my main goal.”

Hernandez has also been involved with Canada at both U15 and U17 levels, and was part of the squad at last year’s 2017 CONCACAF Championships in Panama. Hernandez only saw the pitch in one match, a 31 minute substitute appearance in the 2-1 loss to Cuba, but the whole experience was a key part of his development and left him wanting more experiences in pulling on the red and white of Canada. 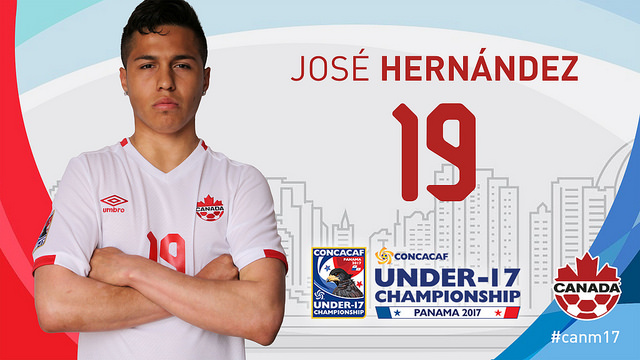 And like many young players currently in the Canadian youth team mix, the ultimate goal is to represent your country at senior level in the World Cup. With 2026 only eight years away, Hernandez would be in his prime at 26-years-old. If he continues banging in the goals the way he has been, and develop his game apace, who knows what the future holds in store for the talented striker.

A lot can happen in that time of course, but hosting the world in 2026 will certainly be a massive motivator for a number of these young players right now to do what it takes to make it to the highest levels of the pro game. And that can only be good for them and the game here.

For now though, it’s all Whitecaps and all USSDA playoffs.

Hernandez has played in both of the Whitecaps U19s group games so far in this year’s playoffs in San Diego, starting the 5-1 win against New England Revolution on Monday, and coming off the bench in the 3-1 win over Crew SC Academy Wolves on Wednesday.

As mentioned, this is his second playoff campaign with the Residency, and after suffering the heartbreak of losing at the semi-final stage with the U16s last year, Hernandez, along with his teammates from that U16 squad, is highly motivated to go all the way this time around with the U19s, and he feels the ‘Caps certainly have the team to do it this year.

“It was upsetting that we lost when we could have won [the whole thing],” Hernandez admits. “But at the same time, it pushes me and it motivates me a lot, knowing that we can be where we were last year and possibly win it this year.”

As things stand the Whitecaps have all but clinched a quarter-final berth after their first two matches, sitting top of the group with six points and a goal difference of +6. Their last game is on Friday against the group’s top seeds, the 5th ranked Pateadores, but the Californians are already eliminated from quarter-final contention following a draw and a loss in their first two games.

That leaves New England, who sit second on three points but with a goal difference of -3, as the only thing standing between the ‘Caps a spot in the last eight. Unless there’s a massive goals swing in the last two group games, the ‘Caps are through, and Hernandez will get the opportunity to put last year’s disappointments behind him.