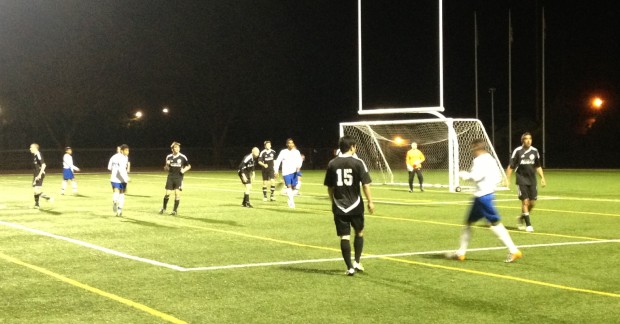 Richmond All Blacks survived a couple of comebacks to beat Surrey FC Coyotes 3-2 to advance in the Keith Millar Provincial B Cup, in a replay of Sunday’s abandoned match.

Richmond got their goals from Ethan Lowenstein, Hei Ming Choy and Brett Sanderson, while Navlesh Mudliar and Terry Oujla responded for the Coyotes.

The match started with Surrey pressing for the first goal but it would be Richmond who struck first in the eighth minute.

A turnover in the midfield had the All Blacks in a 2v2 break that ended when Lowenstein fired a shot that Surrey keeper Chris Singh couldn’t get enough of as the ball just went over the line.

A few minutes later Lowenstein almost set up a second goal for Richmond as his cross found John Chou in the box for a shot that was turned away by Singh.

Surrey settled and carried the play for the majority of the half but they were unable to create chances due to a combination of Richmond’s ability to cut out the attacks and Surrey inability to make the final pass.

The Coyotes had only one chance during this spell when Leroy Kusina backheeled a pass into the path of Oujla into the box. Fortunately for the All Blacks keeper Richard Sebulsky charged the Coyotes captain and made the save, spoiling a great chance for an answer to the opening goal.

Richmond were able to muster a few chances during this period on the counter and Lowenstein saw a cross into Mathiew Campbell in the box directed to the keeper.

Lowenstein was once again on the charge for a second, as he was fed the ball at the top of the box, moved across and let go a shot that forced a diving stop by Singh.

The final ten minutes of the first half saw both teams waste chances.

A free kick by Oujla bounced around before finding a free Kusina, but his shot was well over the net.

Then Richmond had their turn as a terrible giveaway had Daniel Tait on a 1v1 opportunity against Singh, but a poor touch negated the chance and he couldn’t get around the keeper for the goal.

The Coyotes made Richmond pay for that miss during injury time when a throw in was blocked right to Mudliar who struck a shot from about 45 yards out and beat Richard Sebulsky’s outstretched arms to tie the game up at one apiece.

The visitors had a chance to take lead moments later when Ryan Lal was able to break free from his mark but his shot was directed right to the keeper.

After the halftime break the Coyotes came on early with a shot that went off the post and then All Blacks keeper Sebulsky kept a curling corner from going in just below the bar.

Against the run of play Richmond capitalized on a corner that bounced around until it reached Choy in the box. He was stopped initially but followed up on the ball to poke it into the net for the 2-1 lead.

Undaunted, the Coyotes continued to press for an equalizer as Kusina sent in a cross that found a charging player who headed the ball just wide of the net.

Surrey equalized once more, in the 12th minute of the second half.

A throw in by Kusina eventually found its way to Oujla who took a touch and fired it past Sebulsky.

It didn’t take long for the All Blacks to respond as they exploited another corner, forcing a scramble in the box before Sanderson was able to deposit it into the net for a 3-2 lead.

Surrey attempted to strike back right away and Mudliar made his way into the box, firing a laser towards the top left hand corner which Sebulsky was able to force away.

The Coyotes tried to launch wave after wave of attacks for the majority of the remainder of the game but Richmond were able to absorb them with seeming ease.

There was a late surge in the closing minutes by Surrey as they desperately tried to equalise for a third time, but they weren’t able to break down a resolute Richmond defence.

The All Blacks now advance to Sunday’s semi final on the island against Comox Valley United. The game is scheduled to kick off at 2pm at the Comox Clubhouse Field.

If you’re in the vicinity, get yourselves along to the game and support local soccer.