2011 may have seen Vancouver Whitecaps with a static attack, but here’s AFTN’s 2011 Whitecaps Stat Attack!

I know, I know, I’m hearing the groans on a number of levels at that sentence.

I just love sporting stats though. Ironic for a site called Away From the Numbers!

They tell you so much and so little at the same time. If stats aren’t your thing, then now’s a good time to stop reading and go and make a cup of tea. Maybe also best to avoid our Metro column tomorrow!

This is now the third end of season round up we’ve done, and you’ll be glad to know it will be the last, as we now look forward, and onwards and upwards.

Looking at the Caps struggles this season, one question that needs to be asked is just where did it all go wrong?

It’s safe to say that the Caps final record didn’t read as many of us hoped and expected.

34 games played, just six wins, ten draws and a whopping eighteen losses, for final points total of 28 and last place in the League.

One by one, all of our goals disappeared the course of the season (no pun intended!) – winning our first Voyageurs Cup, making the playoffs, reclaiming the Cascadia Cup.

Even beating Toronto’s inaugural season totals fell short on a pro-rata basis by one win and one point.

It makes for dire reading, but, in terms of on-field performance, what was it that brought us to this low point in Whitecaps history?

Before the season started, the question everyone was asking was “where are the goals going to come from?”. Two home games in, and seven goals later, and we were wondering what we were even thinking about talking like that. 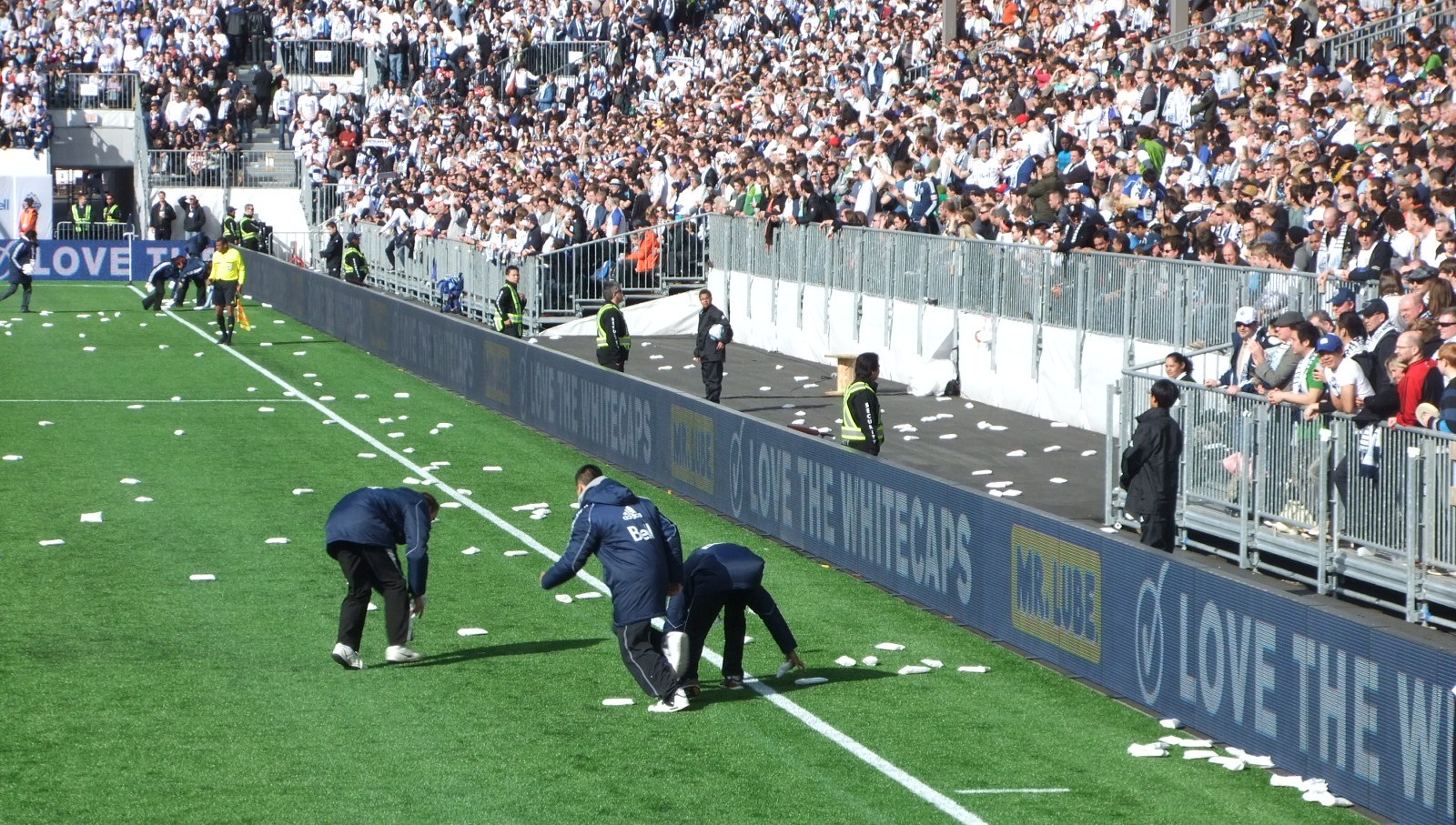 It was poncho time!

Unfortunately, as the season then went on, our fears came flooding back with sorry realization.

The longest we went without scoring was 332 minutes between June 25th and July 9th. That’s 3.7 games and a huge factor in why we were falling apart.

We also had a four game losing streak during that period, or five if you include the Canadian Championship loss to Toronto. I won’t add in the Man City game for six.

The Whitecaps “Player of the Year”, Camilo, did his best to help, finishing fifth in the league’s “Golden Boot” standings with 12 goals. When you consider that the Brazilian and Eric Hassli contributed 22 of the Caps’ league lowest 35 goals between them (63%), then you can see how heavily we relied on the two strikers.

If one, of both, of them were off their game, then the whole team suffered. It seemed rare that both of them were actually on fire at the same time.

Ten Caps players got on the scoresheet this year, but when the third highest is defender Alain Rochat with three, something is seriously lacking in our attacking depth.

Eric Hassli had four multi goal games, proving that when the Frenchman was hot, he was a handful, but when he blew cold, which was often, he was ineffective. That season ending streak of nine games without a goal would have been a killer if we’d anything of real value left to play for.

He did lead the league with three red cards though! His eight yellows saw him third behind David Beckham in the additional caution count.

Joe Cannon had a 67% save percentage in his twenty games, and Jay Nolly 63% in his fourteen. Between them, they faced 160 shots on target in 34 games – 4.7 per game. They faced 491 shots altogether (second highest in the league), so it could have been a lot, lot worse!

Our goalies had six clean sheets between them, with Cannon leading the way with four.

And defence was meant to be our strong point!

To be fair, it was during Teitur’s brief time – his 12 games in charge saw us concede just 17 times, with nothing worse than a two goal defeat.

We competed well in most games this season. There were only a few hammerings along the way, and all of them came once Tommy Soehn had taken over.

Not making a comment on Soehn there, just stating a fact. As much as we’d like to throw Tommy under the bus, the Whitecaps problems have to be shared by many at the club, from the players up. You can’t pin all this onto just one man.

It took the Whitecaps until October to actually string back to back wins together and they never went more than two games undefeated over the course of the whole season.

In the 14 games that the Caps scored first, they went on to win six games, lose four and draw four. If the Caps conceded first, however, then it was a whole different story, failing to win any of the 18 games in which this happened and managing to only fight back for a draw four times.

There’s the missing heart and heads going down moment right there.

Likewise, if they were trailing at the half, as they were in eleven games this season, then forget about. Nine losses on those occasions.

We fought well in the middle of the park at times, but lacked bite and dig.

Gershon Koffie had the dubious honour of suffering the most fouls in the season, at 76. A mark of his talent and danger to the opposition, but we should counter that by adding that he committed the second most fouls in the league as well, with 58!

In the creative stakes, Davide Chiumiento was tied fifth for most assists, with nine, after leading that category in the early stages before falling away a little as the season went on.

And to think we were regularly told during this period that he wasn’t at full match fitness quite yet!

Was fitness in fact an overall key to our downfall, especially in defence?

We seemed to start games well. We only conceded six goals (11%) in the opening thirty minutes, over the course of the season. We scored twelve (34%).

There seemed to be two killer periods for us in matches.

That half hour before and after half time, saw us ship 25 goals (45%). Lack of concentration? Failure in mental dexterity? Poor motivational half time team talks?

To put that in context, LA Galaxy and Real Salt Lake conceded eight in that period, whereas we scored a league worst nine times.

The last fifteen minutes of matches was also a killer. 13 (24%) goals conceded at the death. We did score eight though, including that wonder finish against Kansas City, so we can’t blame tiredness too much. Subs not being introduced quickly enough or too little, too late perhaps.

So them’s the facts. Make of them what you will.

We all have our own thoughts on why this season was a disaster.

What is most important now is that we move forward together. Together in unison. From the fans to the front office.

We all want the same thing – a successful Vancouver Whitecaps FC.

Let’s all work together this off-season to make sure we get it.