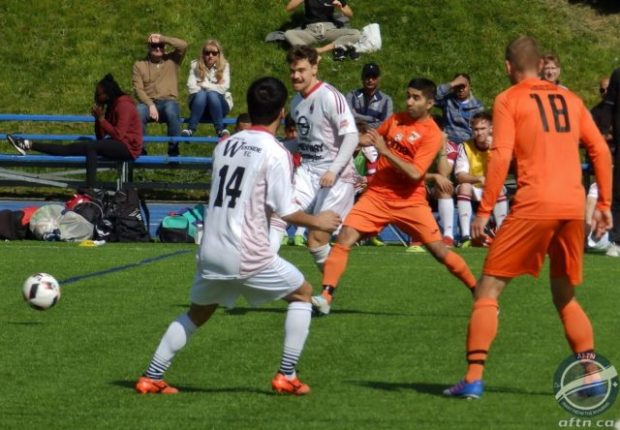 Vancouver Metro Soccer League dominance of the BC Provincial A Cup will continue this Sunday when two VMSL sides battle it out in this year’s final in Nanaimo.

This will be the first all-VMSL final since 2016, which coincidentally was also held on the island at Langford’s Westhills Stadium, but the last eight winners of the famous old trophy have hailed from the Vancouver league. You have to go back to 2010 for the last non-VMSL winner when Victoria’s Gorge FC claimed the crown.

And there will be a new name on the trophy whoever triumphs in Sunday’s final, when two of the VMSL’s bit hitters, Rino’s Tigers and CCB LFC United, collide at Merle Logan Park in what is sure to be an entertaining and encounter.

Both teams have had to battle hard to get to the final, with Rino’s facing VMSL opposition in every round and CCB now making their third trip to the island in the competition, having also knocked out the FVSL Champions along the way.

Rino’s saw off Coquitlam Metro-Ford Wolves with a fairly comfortable 3-0 victory in the first round. Next up was a quarter-final meeting with VMSL champions Croatia SC, in a closely fought match that saw Tigers grab the 1-0 victory through Kristian Yli-Hietanen’s 87th minute winner.

That set up another cracker in the semi-finals against defending Provincial and National champs BCT Rovers Tigers United, in a battle between the two highest scoring sides in this season’s VMSL. 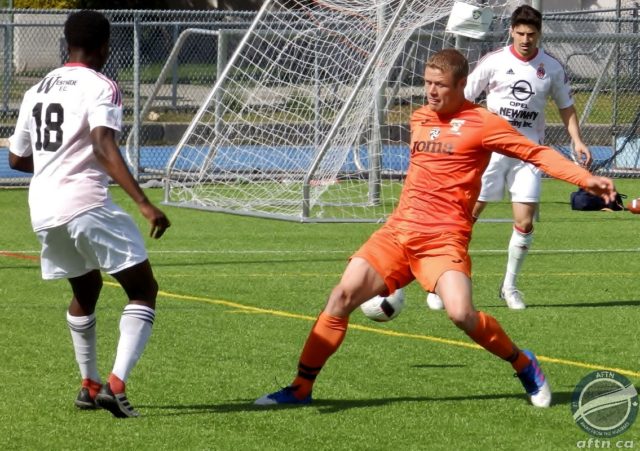 There was little to choose between the teams in the first half, with Rovers Tigers having the better of the few clear cut chances created.

The second half saw a potential game changing moment early on when player/coach Nick Soolsma was sent in on goal. The flag quickly went up for offside but he made the run from his own half, much to the anger of the former TFC striker and his teammates.

After that though Rino’s took over, reducing Rovers Tigers to attempts on the counter and launching attack after attack on the Surrey side’s goal.

They were getting closer and closer to breaking the deadlock, with Connor Glennon firing a shot off the left post before Matteo Polisi crashed a free kick off the crossbar. Glennon then had the ball in the net, but the referee called the play back for a free kick to Rino’s in the build up instead of playing the advantage.

But with the game seemingly heading into extra time, the game exploded in the final five minutes.

Rino’s pressure was finally rewarded when Polisi put the Tigers ahead in the 85th minute, only for Gagan Dosanjh to level things up for Rovers Tigers two minutes later, finally tucking the ball away after two saves from Brandon Waston and a defensive block saw some frantic defending after Soolsma had stripped the ball from Marcello Polisi 20 yards out.

So 1-1 and extra time did indeed beckon.

After that it was all Rino’s. Glennon put the Tigers 2-1 up with a screamer into the top left corner from the edge of the box a minute before half time in extra time. And further goals from Polisi and Glennon in the final 15 minutes sealed the 4-1 victory for Rino’s.

You can see all of the goals, along with some of the other highlights from the game, in our video below:

You can also see some more of our photos from the match on our Flickr page.

Rino’s had clinched their place in this weekend’s final, but they had to wait until the next day to see who they would face.

The Sherman Road Turf in Duncan was the venue for the second semi-final as VISL fivepeat champions Cowichan FC took on VMSL runners-up CCB LFC United.

CCB had travelled to the island to see off Mid-Isle Mariners 3-0 in the first round, before beating FVSL champions Port Moody Gunners 3-2 in the quarter-finals. Cowichan were desperate to have island representation in the final for the first time since Gorge’s 2010 victory and a close game was always going to be on the cards.

Things got quite heated in a testy first half in front of a partisan home crowd, but despite some skirmishes, in which punches appeared to be thrown, both teams headed in at the break with all their players still on the field and with no goals to show for either side’s efforts.

It continued to be tight in the second, with both teams having some chances to take the lead, in a game which already felt that it could be decided by a single goal.

It was, and it came in the 78th minute when former Whitecaps player Caleb Clarke was played in, took a nice touch in the box to get away from the defender, before firing home past Cowichan keeper Darian Achurch.

1-0 win over LMG Cowichan on the island yesterday in Provincial Cup play. Goal was scored by Caleb Clarke. Cowichan was one of the hardest teams we played against this year, can see why they have been successful for many years. #vmsl #welcometothedarkside #unitedwestand #soldyoursoul #darkness #winning #goodfellas

That was to prove enough to send CCB through to the final for what is bound to be another tight battle with Rino’s.

CCB finished the VMSL in second place, three points behind champions Croatia SC and one point and one place above Rino’s Tigers. Both teams know how to find the back of the net, with CCB the third highest scorers in the league with 55 goals and Rino’s the second highest with 65. Both teams also have strong defences, with CCB giving up 25 in their 22 league matches and Rino’s one less at 24.

The two league meetings between the teams were split, with Rino’s winning 4-0 at CCB in week six, before CCB went to Rino’s three months later and came away with a 3-0 victory.

This should be a cracker.

Kick off is 3pm at Merle Logan in Nanaimo and you can see a stream of the match on BC Soccer’s Facebook page.