In a derby matchup between club rivals Rino’s Originals and Rino’s Tigers, it was the underdog side of the Originals who caused a major upset in the race for the RASA Division One Championship.

The higher pedigreed Tigers were tied on points with Delta Blaze going into Thursdays match but the Originals came out attacking from the first whistle.

Their persistence paid off after 20 minutes when Dylan Dailly blasted one past the Tigers keeper to give them the 1-0 lead. It stayed that way at halftime but in the 55th minute Pablo Zubiria put Originals up by two goals. The wind was knocked out of the Tigers sails and it was followed by two goals in a 10 minute spell from Theo Finseth to give the Originals a 4-0 lead.

The Tigers clawed back with a goal from Milan Gandesha and shortly after the Tigers had the opportunity to close the gap when they were awarded a penalty. Joel Padmore firmly struck the ball towards the near corner of the net but Originals goalkeeper Uluc Birol pulled off a tremendous save to keep his side three goal clear.

The game ended with no further scoring and Rino’s Originals had put a huge dent in the Tigers’ challenge for the Division One Championship.

In the other game that mattered Delta Blaze took on Richmond FC Hibernians in Ladner but found themselves down 1-0 on an own goal after 15 minutes. Blaze evened up the score just before halftime, however, from a free kick by Matteo Serka.

In the second half Delta took control of the game and Serka scored two more goals for his hat-trick and the game ended 4-1 for Blaze.

The Delta Club now find themselves three points ahead of the Tigers with a game in hand. Delta’s seven game winning streak continues and their next opponent is bottom of the table Westside FC.

With less than half the season remaining, here’s how the standings are looking. 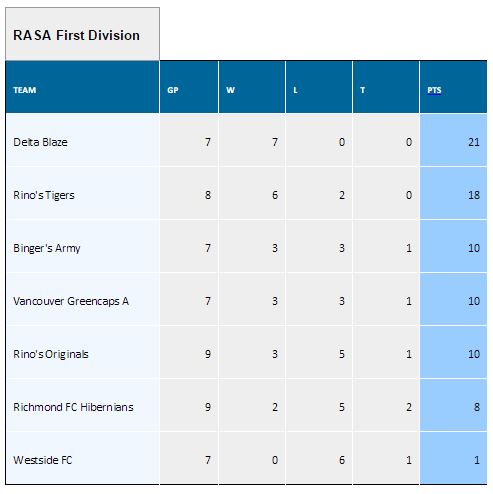 You can follow all the action, and find out this week’s fixtures, on the RASA league website.