Rino’s Tigers and Croatia SC will do battle at Coquitlam’s Percy Perry Stadium on Saturday afternoon in the final of the 2018 Vancouver Metro Soccer League (VMSL) Imperial Cup.

The final will be a match up between two of the most exciting young sides in VMSL this season. Two teams packed with attacking talent, but inconsistent at times over the league campaign, and if their two league matches are anything to go by this season, it should be an entertaining encounter.

Croatia will be going for their fifth Imperial Cup title, and their first since 2005. The club had a great run in the tournament in the mid-90’s, doing the threepeat between 1996 and 1998, and the 2014 BC Provincial A Cup champions will be looking to bring back those glory days and add another piece of silverware to their trophy cabinet.

Rino’s will be looking for their first Imperial Cup crown, and it would top off a fantastic season back in the top flight for the recently promoted Tigers.

Both teams clinched a Provincial Cup berth by making it to Saturday’s final, but they were both made to work hard for it in two grueling semi-final battles at Empire Fields on St Patrick’s Day.

Rino’s semi-final clash with Provincial A Cup champions Club Inter had a bit of everything – the good, the bad, and the ugly. It was certainly entertaining. 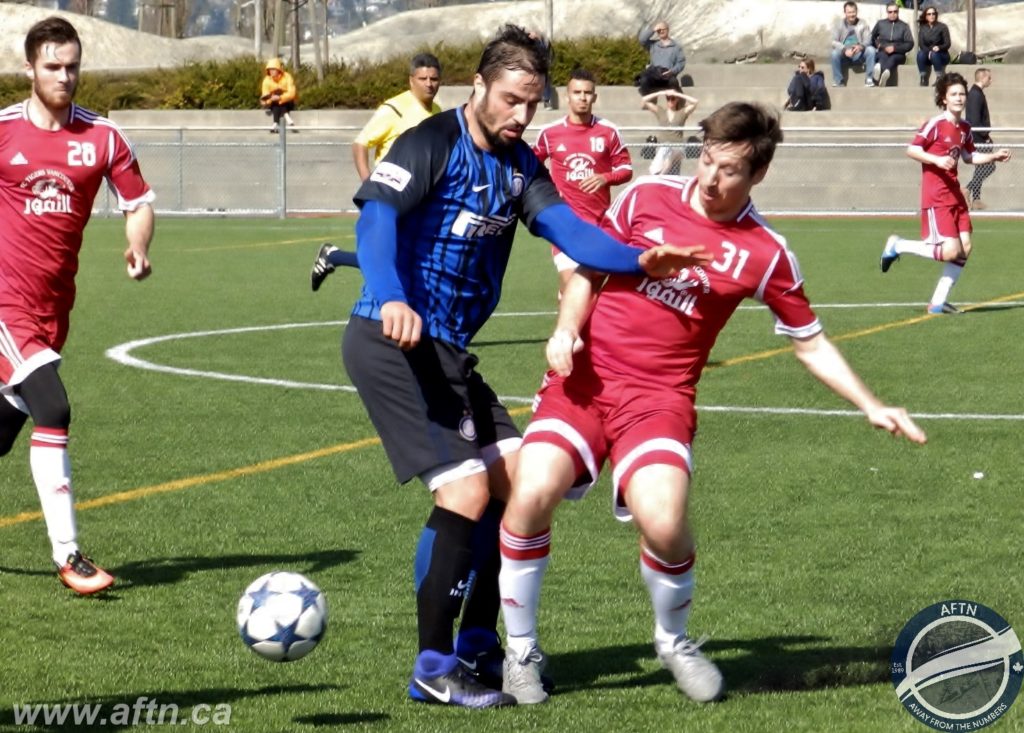 Inter were by far the stronger of the two sides in the first half, with Rino’s, who were unable to start some key players, failing to muster much of an attack. It was pretty much one way traffic, with Milad Mehrabi and Marco Visintin both having early changes to fire Inter ahead. The always dangerous Mehrabi came closest when he broke away on goal and lobbed the Tigers keeper, only to see former SFU Clan captain Alexander Kleefeldt produce a brilliant last ditch clearance off the line.

Inter weren’t to be denied, however, and Mehrabi fired them in front midway through the first half with a wonderful solo goal, pouncing on a Rino’s giveaway to power forward past a couple of Tigers defenders and drill the ball home from the edge of the box. No more than Mehrabi and Inter deserved and at this point of the match, it was hard to see Rino’s getting back in to it.

But this was to be your proverbial game of two halfs and Rino’s turned things around with a fantastic second half display.

Declan Rodriguez nearly pulled Rino’s level with a long range effort that left Inter ‘keeper Andrew Fink rooted to the spot as it crashed off the bar. He wasn’t to be so lucky minutes later when a long range dipper also left him rooted but this time the ball flew high into the net.

1-1, and from out of nowhere, the game was now very much back on.

But Inter fired back quickly, with Milad Rahmati finishing a perfect ball into him in front of goal from six yards out.

Rino’s weren’t dead and buried yet however and pushed hard for another equaliser but Fink came up with some strong saves and another couple of chances went inches wide.

The drama was far from over though and Rino’s got their leveller in the last minute when MacMillan fired home a cutback from eight yards out sparking wild celebrations on the pitch from the Tigers contingent. Rino’s head coach Blaise Nkufo ran onto the pitch to celebrate with his players and was subsequently sent off, along with an undressed player.

Marcello Polisi almost won it for Rino’s in stoppage time, but he poked his shot just wide of the left post and the game headed into extra time. And I’ve got to say, I was quite happy to watch an extra 30 minutes of it.

Tigers were the stronger team in the extra periods and they were awarded the perfect chance to sew things up when they were awarded a penalty in the first half of extra time. Matteo Polisi stepped up, but his weak effort straight down the middle was easily saved by Fink.

With no more scoring, the match was heading to a penalty shoot-out but not before Rahmati and Kleefeldt were both shown red cards in the dying seconds – Rahmati for a punch and Kleefeldt for understandably reacting. We’d love to say the dismissals were the end of that incident, but they weren’t and we’ll come to that later.

A shootout was to settle things. The first four penalties were all tucked away, but Inter crashed their third effort off the left post. The next four were dispatched with ease and that left Marcello Polisi with the chance to seal a spot in the final, and guarantee a BC Provincial Cup berth, with Rino’s fifth kick, which he duly did with a perfectly placed shot.

So a 5-4 shootout win for Rino’s and a chance to lift their first ever Imperial Cup awaits.

You can see our highlights, featuring all the goals and the penalty shoot-out in the video below. A cracking match.

Drama for sure, and it didn’t end at the final whistle of that Rino’s – Inter match, with a further serious postgame incident involving Rahmati, which saw police attending the venue, being referred to BC Soccer. That’s all we’ll say on that for now.

Inter also filed a complaint regarding Rino’s fielding an ineligible player who they claimed was still registered with an overseas club, but this appears to have been dismissed.

While all that action was being played out in the first semi-final of the day, there was also drama in the second, as Croatia fought back from going a goal down to see off West Van 3-1, with a storming second half fightback. 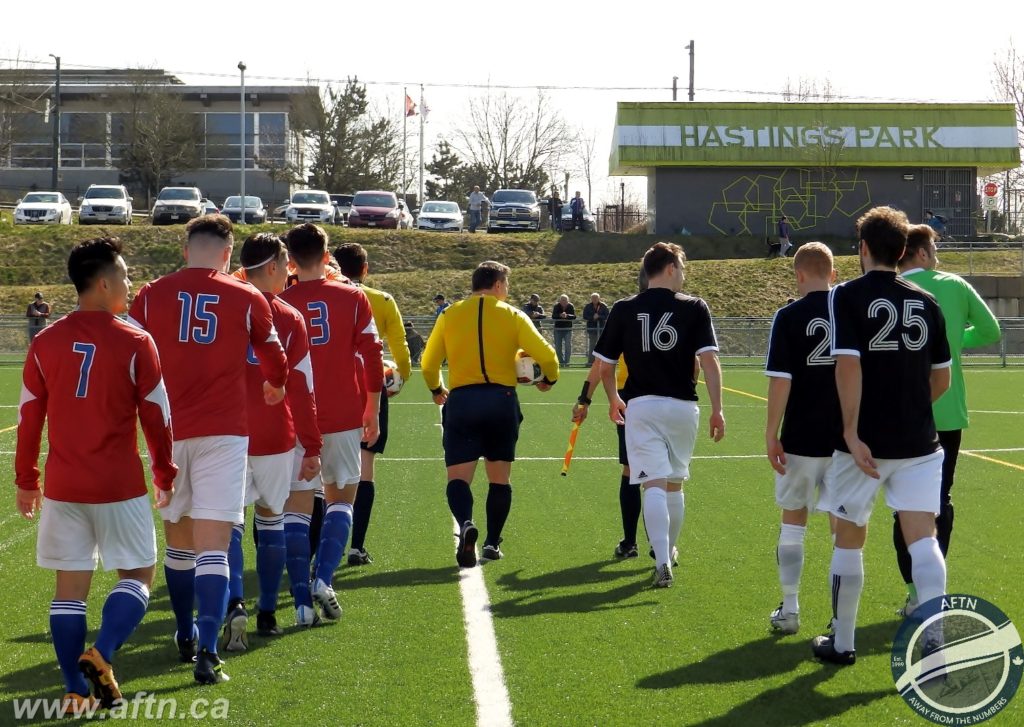 West Van dominated the first half, and could easily have gone in to half with more than just the one goal advantage that they did, but Croatia game out all guns blazing to start the second and tied things up pretty quickly after the restart.

Game on and both teams had their chances to go into the lead, as both midfields started to control proceedings. You felt the match was going to be heading to extra time, but Croatia got the go ahead goal with around eight minutes remaining.

West Van desperately pushed for a late equaliser, but they were caught on a quick two-on-one counter in stoppage time, and Croatia grabbed a third to seal their place in the final.

And what a final that should be.

Only three points separated Rino’s and Croatia come the end of the 22 game VMSL Premier season. Croatia currently sit fourth on 40 points, but could drop a spot depending on how fifth placed Club Inter do against third placed West Van on Friday night. Rino’s finished sixth, on 37 points.

The two league matches between the teams were high scoring affairs. Croatia came out on the right end of a 5-4 thriller at Trillium in September, with Rino’s getting some revenge with a 3-1 victory at Burnaby Lake in December.

Both teams were offensive juggernauts at times this season.

Yli-Hietenan was one of a number of top college players who joined the Tigers in December, immediately giving them a new lease of life and their SFU Clan contingent of Matteo Polisi, Marcello Polisi, and Connor Glennon will be key players in Saturday’s final. All three will be on TSS Rovers squad this coming PDL season, along with two other recent Rino’s additions, Daniel Sagno and Erik Edwardson.

Croatia were second in the goalscoring stakes with 56 goals. 19 of those came from VMSL Golden Boot winner David Malamura (pictured below), with his brother Mark adding eight and Emile Saimovici nine, but they have a number of goal threats on their roster. 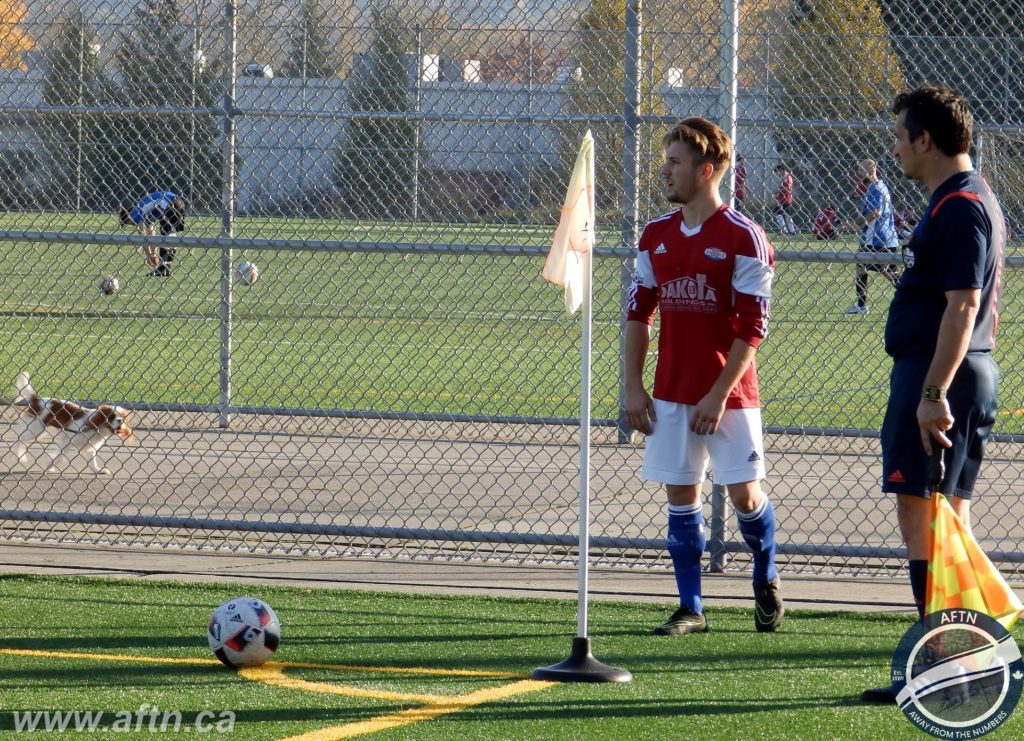 We’re expecting a high scoring, but closely fought, affair and the action gets underway at 5.30pm. Entry is free, so get along for some top quality local soccer. Clearly I’ll have oversold this and it’ll no doubt end up as a scoreless stalemate settled on penalties after 120 minutes now!

But all of Saturday is VMSL Cup final day in Coquitlam, so you can make a full day out of it if you’re wanting.

The action gets underway at 10am with the Under 21 Cup final, with Faly Academy Soccer and West Van FC squaring off. The two teams finished third and second, respectively, in the league, and banged in a lot of goals along the way.

Next up is the Division 2 Cup final at 12.30pm, and it should be an absolute cracker as Division 2A champions, Coquitlam Metro Ford Lupi, buoyed by home turf advantage and back to back promotions, take on Division 2B champions, and defending Provincial B Cup champs, Vancouver Greencaps. Someone’s going to do the league and cup double and this is a match not to be missed.

The Masters A Cup final is next up at Percy Perry at 3pm between two surprise packages, PCOV and EDC Burnaby, with the Master B Cup on Field 2 half an hour later between IG MicroMed Dragons and ICSF Columbus B.

The weather doesn’t look the best for Saturday, but there’s cover at the stadium and the ‘Caps are away, so if you fancy your fix of live football this weekend, Coquitlam is definitely the place to be.