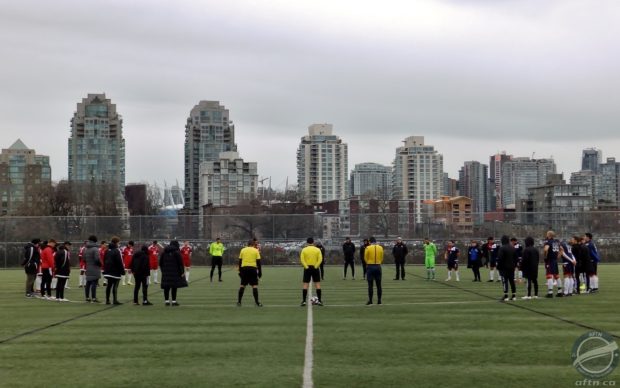 When you look out the window right now, it’s hard to imagine that just a few days ago there were some Vancouver Metro Soccer League (VMSL) matches being played!

After snowing on Friday and then seemingly ever since from Sunday, there was a temporary break in the weather that allowed three of this past weekend’s six scheduled VMSL Premier Division matches to be played. It was chilly but at least there was some live football to watch!

The snow’s first casualty came on Friday night when league leaders Croatia SC’s match against bottom side ICSF Columbus at Burnaby Lake was postponed. Burnaby Selects White Eagles match with Coquitlam Metro Ford Wolves met the same fate on Sunday, as did the game at Newton between CCB LFC United and NVFC Norvan.

Croatia’s weekend off gave the trio of teams in the chasing pack the chance to close the gap and second placed Rino’s Tigers took full advantage at Trillium on Saturday afternoon against Club Inter EDC Burnaby, although they were made to work very hard for their 4-2 victory. 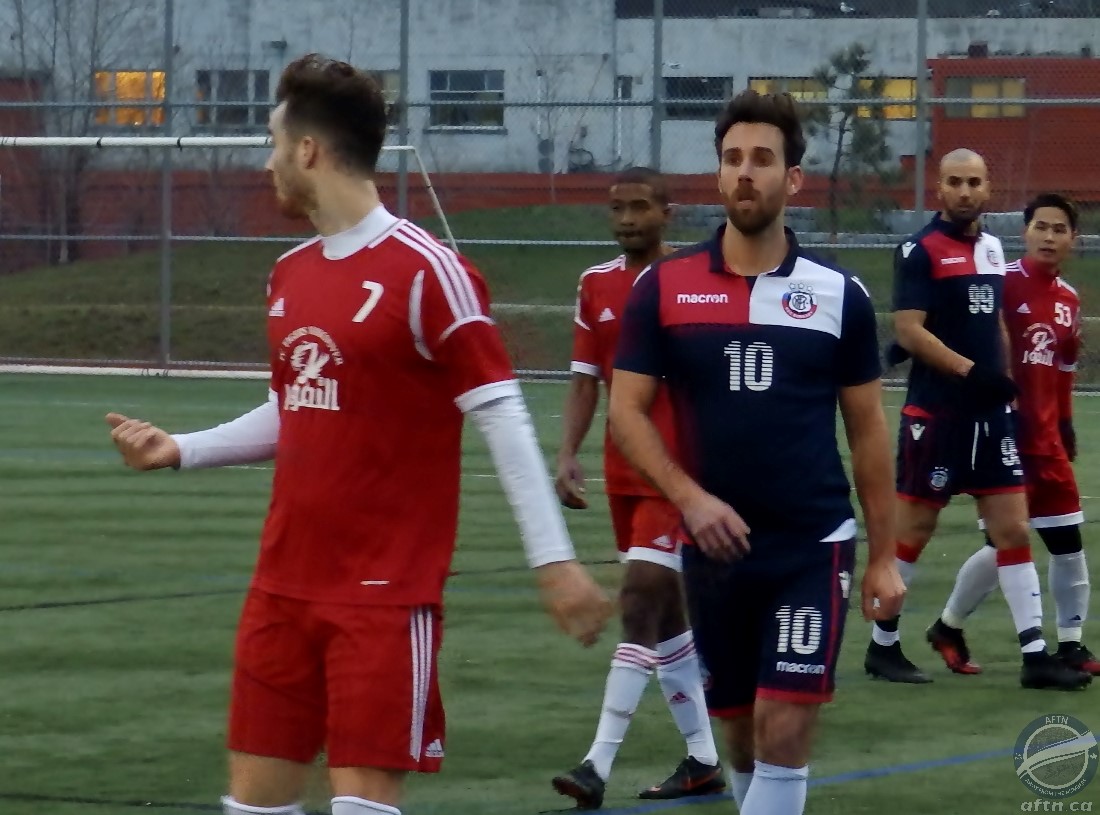 It was Inter who settled first in the bitter and blustery conditions, and Mohammed Habib was sprung eight minutes in, racing in on goal to fire home the opener for the mid-table side, his third of the season.

Rino’s fought back and levelled just past the half hour mark when the Golden Boot leading Farivar Torabi showed nice footwork in the box to fire home his 24th of the campaign and Erik Edwardson, returning from a stint over in Germany, put Rino’s ahead three minutes before half time when his free-kick was deflected past the Inter keeper and nestled in the net.

Inter fought back after the break and tied things up again in the 63rd minute when Colin Streckmann rose to powerfully head home a corner.

It was to be short-lived joy for the visitors though as Omar Rostant fired Rino’s back ahead seven minutes later, with a nice run and finish. Connor MacMillan then secured all three points for the Tigers when he slotted home a 76th minute penalty for the 4-2 final.

You can see our highlights of the match in the video below, which sadly were hit once again by the sensitive focus on the camera and are blurry at some of the worst moments! We now have a new camera, so hopefully that proves more successful.

That victory moved Rino’s to the top of the VMSL Premier standings with five matches remaining, one point ahead of Croatia but having played a game more.

And as things turned out, Rino’s were the only team in the chasing pack able to take advantage of Croatia’s week of inaction, for the spoils were shared in the battle between the third and fourth placed teams at Ambleside on Saturday afternoon, with West Van FC and BCT Rovers Hurricanes playing out a 1-1 draw.

Both goals came from penalties, with Nick Soolsma firing the Hurricanes ahead in the 59th minute before Eoin McCormack levelled things up for West Van from the spot 12 minutes from time.

The point keeps West Van one point ahead of the Hurricanes in third, but they are now six points behind leaders Rino’s with five games left to play.

The last match played over the weekend was a goalfest at Burnaby Lake on Saturday evening as SFC Pegasus saw off Guildford FC FASA 5-3 in an entertaining encounter that keeps the Horsemen’s battle for one of the four guaranteed Provincial Cup berths very much in their sites.

Former WFC2 man Sahil Sandhu fired Pegasus ahead two minutes in and Chetan Jhooty made it two in the 28th. Azad Palani added a third for Pegasus three minutes into the second half before Ramsey Alfantazi pulled one back for FASA from the spot four minutes later.

Palani grabbed his brace in the 76th minute to see Pegasus go nap, before Brandon Bangambee rounded off the scoring to add FASA’s third with 11 minutes remaining.

So with those three matches in the books, the VMSL Premier Division standings look as follows after Week 17: 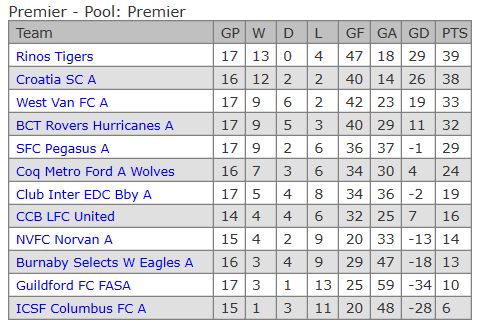 Week 18 already looks set to be lost to the weather, but remember you can find all the fixtures, results, and standings across all the VMSL divisions at VMSLsoccer.com, and don’t forget to head over to the TakeThePiss forums for all your football banter.