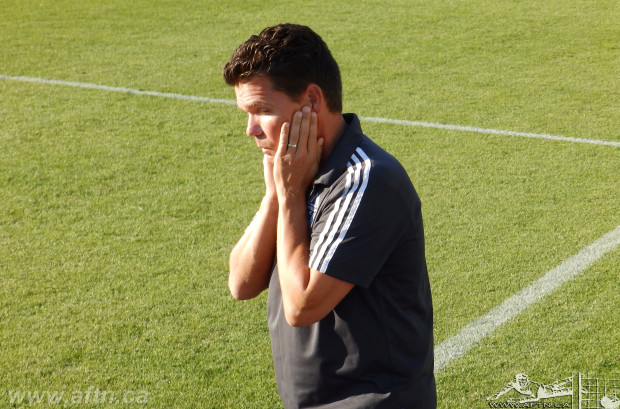 It was ‘Beach Night’ at Thunderbird Stadium but WFC2 more gave the impression of playing in quicksand as they slumped to their worst defeat of the USL season, going down 4-0 at home to Tulsa Roughnecks and leaving their playoff hopes hanging by a thread.

It’s not the first time the young ‘Caps have lost by that scoreline this year. Their season opener at Seattle ended the same way, but to do so at home and to play so poorly in the process, with so much at stake, makes this one harder to take and a worse result by far.

With only one loss at home heading in to this one, hopes were high that the ‘Caps could send the team off on the right footing with a tough four game road stretch coming up.

Instead, Tulsa hit four unanswered second half goals to run out comfortable 4-0 winners and move above Vancouver and into the sixth and final playoff place in the Western Conference.

Vancouver had their chances, especially in the first half, but once again they couldn’t take them and they were made to pay when Tulsa hit two quick goals at the start of the second half and took control of the game.

Sammy Ochoa opened the scoring in the 51st minute, with Steven Miller adding a second five minutes later. Although the ‘Caps pushed to try and get back in it, nothing was coming off and the Roughnecks were easily the better side.

Tulsa tied things up with two goals in the closing minutes. Brady Ballew made it 3-0 in the 86th minute, then to rub salt into Vancouver wounds, Kyrian Kidd made it four two minutes later, with Tulsa down to ten men as Ballew was off getting treatment.

Understandably, WFC2 head coach was not a happy man at the final whistle.

“One of those nights,” was the simple explanation offered up by Koch to reporters after the game, before expanding. “The first 45 minutes we didn’t do a good job of breaking them down. I felt we could have played a lot better in the first 45 minutes. We encouraged them to come out and pick it up in the second half, not do the opposite, which is what they did.

That certainly does seem to be an issue with the WFC2 team this season. They can play great in spurts, even for a half, but stringing together two full halves and a complete 90 minute performance has proved difficult.

It’s something that Koch knows needs to happen for this team to turn a corner and he challenged his players to start showing more soccer smarts in matches to help that happen.

“It’s one thing to possess the ball, which I think we did a good job of at times, but you obviously have to show football IQ in terms of seeing where the space is,” Koch stated. “It’s fine if you possess the ball in your own half, but what’s the outcome? We want to go down the field and possess the ball in their half and try to create opportunities.

“It’s one thing to look good when we’re knocking it around but what were we actually trying to achieve when we had the ball? They did a good job of sitting back and there wasn’t a lot of space, so it made it difficult for us, but I think we all know that we’re a lot better than we showed tonight and unfortunately that wasn’t a very good performance.”

Despite shipping four goals, WFC2 ‘keeper Paolo Tornaghi could not be blamed for any, let down by the league’s worst defence and several poor defensive plays and marking mishaps. In fact, the Italian kept the scoreline down.

Diego Rodriguez was in playing the entire 90 minutes again, and it has to be said, the Uruguayan is steadily looking worse every week. Not a good sign for his MLS chances, and he must surely have dropped down to number five in the depth charts in recent weeks.

The ‘Caps have now let in 41 goals in their 21 matches. That’s six more than the next worst in USL. They’ve also conceded eight goals in their last two games and have only managed one clean sheet all year, so it’s clear to see where the main concerns and development areas lie.

With back to back defeats now and winless in three, some heads will start to go down. That’s inevitable with a young squad. The challenge for Koch now is what he can say to them to help pick them back up again.

“We’re going to have ups and downs as a young group,” Koch admitted. “We’ll learn from tonight. We’ll put it behind us very, very quickly and get ourselves, motivated, energised and have a good week of training and get ourselves ready for that game on the road.”

That next game, the first of four straight away matches for the team, will at least give the ‘Caps a chance of immediate revenge as they travel to Oklahoma to take on Tulsa on their own turf. And if the young ‘Caps are going to make the postseason, you feel they have to take something, if not everything, from this one.

“Huge game,” Koch admitted. “We’ve got them on the road at their place. It’s not going to be an easy game. Thank goodness we don’t play them tomorrow, so we’ve got a few days to digest this, go look at some video and see what we’ll need to change.

Now we should also talk about development. We know that the team is there to be just that, a place for players to get valuable minutes, learn and develop. Whether that be the MLS guys coming down or the USL squad guys. But winning and a postseason run also goes a long way to doing all of that.

Very few of the players are actually making the most of the minutes that they’re getting, grabbing their chances and knocking on Carl Robinson’s door. Some are, not all will, but if the team is to move forward, more of them need to be doing it.

“Whether you start or you come off the bench, if you get minutes, you’ve got to seize those minutes,” Koch said. “And the players that seize them will be the ones who develop the quickest. We’ve got some players who have done a very good job of that this year. Tonight just wasn’t one of those nights.”

Want to relive it? Then here’s Tom photo slideshow from the game.