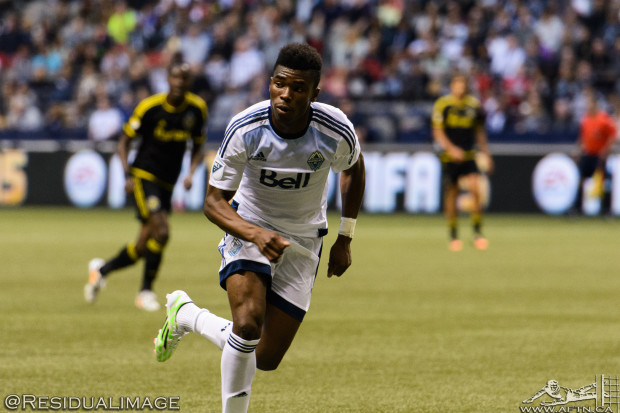 After seemingly establishing himself as Carl Robinson’s first choice for the left-back role, 2015 was shaping up to be Sam Adekugbe’s breakthrough season. It still could very well be.

The battle between the young Canadian and Jordan Harvey for that job had begun last year and continued throughout preseason. Adekugbe was pushing Harvey all the way, but the veteran held on to his spot for the first game of the season against Toronto.

After shipping three goals in that home opener, Robinson decided to make some changes and Adekugbe started the second game of the year, away to Chicago. The ‘Caps won and Adekugbe kept his place in the team for the next match at Orlando.

A rib injury forced him out of that one late on. It looked bad, but the resilience, and quick healing powers, of youth saw Adekugbe return to the line-up the next weekend, bruised ribs and all.

Adekugbe was impressing and the team was winning. After starting five of the next six MLS matches, the left-back role now looked his to lose.

Robinson gave the youngster a rest to save him for the Canadian Championship game against FC Edmonton. The Canadian was fired up to be playing for the ‘Caps in the national cup but unfortunately that’s where disaster struck for Adekugbe and he was forced off just 17 minutes in with an ankle injury. 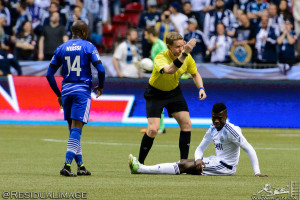 The severity of that injury to his right ankle soon became clear and Adekugbe hasn’t kicked a ball in anger since that game on May 13th. But after a lot of work, a lot of rehab and what must have felt like the longest 11 weeks of his life, Adekugbe is back, raring to go and looking to regain that left-back role, no matter how late into the season it now might be.

“It’s been a while,” Adekugbe told reporters at training on Tuesday. “It was disappointing. I was able to get into the team and getting a run of games. To be hit by such a big injury was obviously disappointing but I’m happy to be back.

Adekugbe returned to full training last week. He’s walking and running fine, and although he may be back in the mix with less than half of the season remaining, that freshness could yet give him an advantage in his quest to get back that starting left-back spot.

“It does, but obviously it’s harder to get back into the groove of things because the season’s gone on for so long and people are almost playing at their prime and at their max fitness levels,” Adekugbe said. “Now it’s just for me to get back into that zone where I’m getting match fit, I’m getting up and down and I’m able to get that volume of fitness back.

“It’s disappointing, but there’s nothing I can do. Everyone is going to get injured so I’d rather it be now than when I’m older and it’s harder to recover from.”

Having joined the ‘Caps Residency program in 2011, Adekugbe is now in his third MLS season with the club. He’s worked hard, developed his game and impressed many watchers. But despite knocking on the door for first team minutes, the 20-year-old has had to play the waiting game for his chance to seriously challenge for the starter’s job.

Adekugbe made his MLS debut in the last game of the 2013 season under Martin Rennie, starting against Colorado for the suspended Harvey. He made a further four appearances last year, but only one of those was a start. This season, he already has seven to his name, all of them starts.

But while he’s been away the landscape has changed a little and he’s perhaps not only battling Harvey for left-back minutes, but also Christian Dean.

With Harvey suspended once more, the centre back came in at left-back and put in an excellent and assured performance in Sunday’s win over San Jose, offering the Whitecaps more size and athleticism in the position.

Dean has also looked good there in USL games, so Adekugbe could find himself with more of a battle to establish himself as a regular starter than he had at the start of the year. It’s a battle he’s aware of and ready for.

“I have to crawl over a lot of people,” Adekugbe admitted. “Dean played really well on the weekend. Jordan has been playing well ever since he got back into the line-up. It just makes me want to play harder and do things more positive and do things even better to get myself back into the team. Competition’s all over the place, so it’s not just me, it’s everyone else as well.”

It’s exactly what Robinson wants in his squad and how Adekugbe bounces back and battles back will tell the ‘Caps coach a lot about his young player and the hunger and desire is already clear for all to see.

But being back in training and being up to full match sharpness are two very different things, as fellow defender Diego Rodriguez has been showing of late.

Rodriguez has been playing the last few USL games as he tries to fully recover from his own injury and Adekugbe is likely to follow suit and play some minutes for WFC2 in their game at Tulsa Roughnecks on Friday evening.

So does Adekugbe feel he needs just one or a few of those USL games to get back into full match fitness and a return to MLS action? It’s hard to really say until he gets out there.

“Games are games and I’d still be getting fitness in either or. I wouldn’t expect myself to play 90 minutes straight away, unless I could and I feel great, but who knows?” 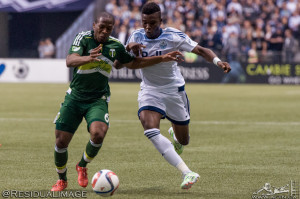 From the Whitecaps point of view, Adekugbe’s return couldn’t have come at a better time. With eight games, over three competitions, coming up in August, Vancouver’s squad rotation and depth will be tested to the max. Every player should see playing time, and Robinson already has his eight line-ups planned, selected and drawn up on a whiteboard in his office.

That’s all pending unforeseen circumstances, of course, but Adekugbe is very much part of those plans and fans are likely to see him again in first team action as early as next week’s home Champions League tie with Seattle.

Is that a realistic target game?

“I’m feeling pretty confident in my injury now. I’ve gone over it, now it’s just about a matter of me getting more training. I was able to train all last week, training this week, so hopefully it’s just around the corner now.”