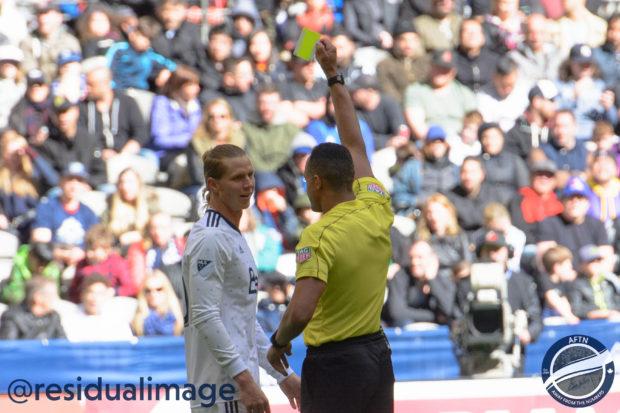 Just because you’re paranoid. Don’t mean they’re not after you.

The words of the late, great Kurt Cobain there in Nirvana’s “Territorial Pissings”. And many other people over the years. Some saner than others. But how can you be sane when year upon year you have to watch “PRO” Referees taking charge of Vancouver Whitecaps games?

In particular, how can you expect to have any sanity left when Ismail Elfath is the man in the middle?

I do like a good conspiracy theory, but yes, they are somewhat lame when sports fans trot them out as reasons for leagues and officials seemingly being biased against their particular team.

I prefer to look at plain facts and when it comes to refereeing Whitecaps matches, Elfath’s stats are somewhat eye opening. Shocking some may say.

Elfath became a professional referee in 2012. His first Whitecaps match assignment came the following season when he was appointed to be in charge of Vancouver’s trip to California to take on Chivas USA on March 30. The ‘Caps lost 2-1 that day.

His first six Whitecaps matches weren’t all bad. In fact, the ‘Caps actually won three of them, drawing one, and losing the other two. Then it all went downhill fast.

Saturday night’s match in Atlanta was the 16th Vancouver Whitecaps MLS match that Elfath has been in charge of. The ‘Caps record with him as referee stands at 3 wins, 3 draws, and 10 defeats. Vancouver are winless now in 10 games with Elfath as the ref, eight of them losses (stats courtesy of the excellent transfermarkt.com site).

In those 16 games, Elfath has booked 23 Whitecaps and sent off three. From March 18th 2017 to March 17th 2018, Elfath has refereed five ‘Caps matches in MLS. They’ve lost four, drawn one, and had Brek Shea (pictured above), Matias Laba, and now, Kendall Waston sent off as they’ve given up 12 goals.

Only one player has been sent off from the Whitecaps’ opponents in these 16 games and that was back in 2015.

Now obviously we’re not saying that Elfath is deliberately biased against the ‘Caps. That would be crazy to even suggest that, wouldn’t it?! But let’s just say that ‘Caps coach Carl Robinson has certainly noticed that things just don’t feel right when Elfath is the referee.

“Three times, I think, I have had the same referee, and each time we have gone down to 10 men,” Robinson said after the Atlanta defeat last night when asked if he’d got an explanation from Elfath for Waston’s dismissal.

“I’m better off not probably talking to him. I’ll speak to Howard Webb because there’s a number of things I felt went against us. Even the yellow card situation with one or two of their guys, smart tactical decisions, substitutions from them and credit to them. I’ll speak to them next week, but it’s not acceptable.”

This comment follows on from his dig at Elfath after Laba was sent off in the ‘Caps 4-0 loss in Chicago last July, where he said, “Usually I joke with the referee that when I play with this ref I play with ten men”.

Yup, it’s all fun and games until someone loses a key defender.

So a biased referee, a jinx, or just pure bad luck? Maybe he’s just a very poor referee. I’ll let you all come to your own conclusions, but next time you see Elfath down as the referee for a Whitecaps game, don’t expect to enjoy the match.