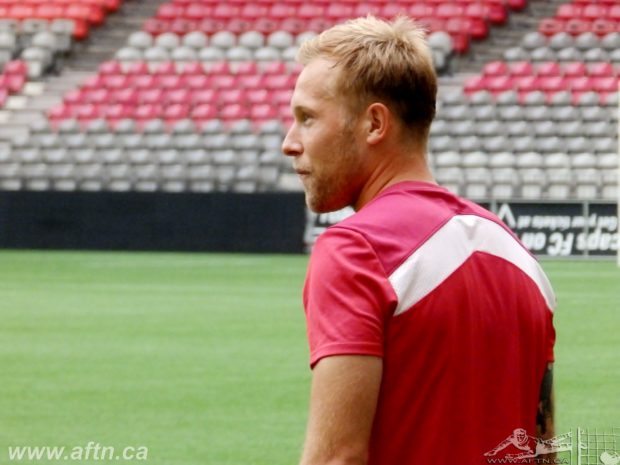 It’s been something of a baptism of fire for Burnley FC midfielder Scott Arfield in his Canadian national team career so far.

After pledging his international future to Canada over his native Scotland in February this year, Arfield earned his first national team call-up for the World Cup qualifier home and away double header against Mexico in March, making his senior international debut as a half time sub at Vancouver’s BC Place in front of 54,798 fans.

Canada were already two down by that stage, going on to lose 3-0, but Arfield impressed in the 45 minutes of action fans saw from him. Unfortunately, giving everything for the cause, he picked up an injury towards the end of the game and was forced to miss the return game at the Azteca four days later.

Arfield finally got his first taste of CONCACAF away action in Honduras this past Friday, getting the assist on Canada’s goal in the 2-1 defeat. It’s a result that’s left Canada’s World Cup qualification hopes hanging by a thread, but the overall experience was exactly what the midfielder was looking for when he pledged his international future to Canada.

“That game, I know it ended in defeat, but everything I wanted was in that Honduras game,” Arfield told AFTN this week. “In terms of the heat, the fans, the buzz of the games. And it’s big games as well.

“I probably could have stayed and seen it out and probably ended up playing with Scotland, but I wanted to come here and I wanted to experience exactly what we done there. Play in these big games, and it doesn’t get any better than Tuesday night.”

Honduras was a pressure pot atmosphere, with frenzied fans and temperatures in the mid to high 30s. That’s perhaps not everyone’s ideal way to spend an afternoon, but Arfield took a lot from the experience, which was far removed to what he’s been used to in his footballing career to date.

“Obviously very different,” Arfield told us. “The heat, the humidity, everything was a real experience and something that’s going to stand you in good stead for other qualifiers, for the rest of it. Personal experience, it was obviously great to get it out of the way and experience something like that.”

But the result could be a killer for Canada.

The 2-1 loss leaves Honduras in pole position for the second qualification spot in Group A for the ‘Hex’, and the final round of CONCACAF qualifying to see what teams will represent the region in Russia in 2018.

The Hondurans have a level goal difference, Canada minus five. That leaves the Canadians needing a six goal swing in the final group games on Tuesday night. There are scenarios where a five goal swing would see them through, but six makes it guaranteed no matter what the scorelines in the two matches.

Honduras head to Mexico, and even though El Tri tied up qualification many months ago, getting any positive result in front of a partisan, and demanding, Azteca crowd will be a tall order. That leaves Canada knowing that if they can bang the goals in at home to El Salvador, then they could advance to the final six for the first time since the 1998 World Cup qualifying campaign.

Easier said than done, of course, for a team that has been very defence-minded and only managed to score twice in their five qualifications matches this round.

“We know the scenario, we know we need to get goals” Arfield acknowledged. “It’s been well documented over the qualifiers that we’ve not scored enough goals. It’s only two goals that we’ve scored, so it needs to kind of flip round. We need to take the game to them and we need to win the game and end it very comfortably. It’s up to us to go and do so.

“We’ve got a gameplan. It’s going to be very much different from the Honduras game in terms of what we need to do. We need to take it to them, we need the fans to get right behind us and believe in us, which we certainly do.”

Canada have struggled to score goals at international level for years, at one stage going through a 958 minute scoring drought in matches during 2013 and 2014.

Things have started to turn around, and they have strikers who are scoring regularly at club level. Getting them to do that consistently at international level has been a challenge, but with players like Arfield now in the fold, the hope is that missing creativity could unlock the likes of Cyle Larin and Tesho Akindele in a Canadian shirt. He’s confident it will.

“That’s the thing, it’s well documented that we haven’t scored enough goals,” Arfield admitted. “It’s up to us. We’ve done a bit there [to practice in training]. The best feeling in the world is scoring a goal, so it’s not as if we don’t want to, it’s just that we haven’t taken our opportunities in numerous games.

“So this time everything needs to click. We need to take the game to them, and hopefully we can get the goals that we need to go through.” 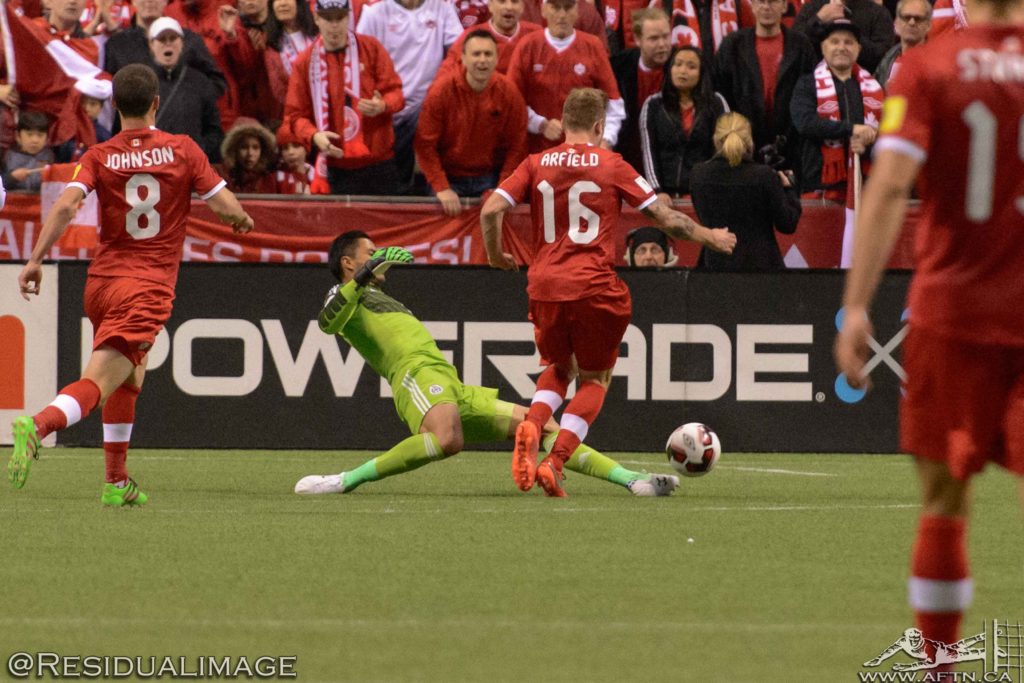 The Honduran game was Arfield’s fourth in a Canada jersey, following his debut against Mexico and two friendlies in Austria in June. The midfielder’s had previous international experience with Scotland at youth, U21 and B levels, but he admits that he’s finding it different to what he’s used to in English club football week in and week out.

“The Honduras game was a bit of a shock, in terms of everything they done was fast and it was for a point,” Arfield said. “They wanted to score a goal every time they got it. With Chelsea last week there, they don’t, they pick their moments. They keep it at the back and the midfielders come in and pop it. It was completely different to what I’m used to.

Arfield has headed over to Canada in good, early season club form, having played in all three of Burnley’s Premier League games and their one League Cup tie.

This will be Arfield’s second season in the Premier League with Burnley, and the club’s third overall. Burnley have had a little bit of a yo-yo existence the last couple of seasons, bouncing between the Championship and the Premier League.

History doesn’t favour the newly promoted clubs staying up, although recent seasons have seen more make it than before. The Clarets are keen to be one of those clubs that have bucked that trend, but they know they have a tough job on their hands to do so.

Right now, the main task in hand is to keep themselves out of the three relegation places and build from that.

“Yeah exactly,” Arfield admitted. “The first game that we played, the Swansea game, I think overall a draw was probably the right result. We never got that, so it was up to us to take the game to Liverpool. The overall possession was 81%, or something like that, so we know exactly how difficult it’s going to be.

“We need to first of all get to as many points to make sure that we’re in the league next year. This time it’s completely different to the season before that we had there. It was almost like a bonus that we got there. This time we’re there on merit by winning the league, which is notoriously a difficult thing to do, and we won it quite comfortably in the end.”

Burnley won last season’s Championship title by four points from Middlesbrough, losing just five games along the way, and it was those performances that leave Arfield in no doubt that they can bring that form and success to the Premier League this time around.

“The mentality, and the physical and the mental strength of us was showing through in the end,” Arfield added. “We can take massive, massive rewards and gains from that season, and I think we can solidify ourselves in this league, which we believe that we belong here, so that’s exactly what we need to do.”

Burnley are currently sitting in 13th place in the league, after starting off their season with a win and two defeats. Arfield will have a big part to play if the team is to stay up and consolidate their position as one of the top sides in the country.

As we’ve said, it’ll be tough, but Arfield is hoping he can draw on these international experiences and bring something extra back to Turf Moor.

“It’s massive experience,” Arfield feels. “The travelling and just seeing different things. Probably most of my team would never experience the likes of Honduras. The heat, the humidity, the fans an hour before the game. It just does not happen like that.

“You need to take those experiences and put it into a Saturday at 3 o’clock or a Tuesday night at quarter to eight.”