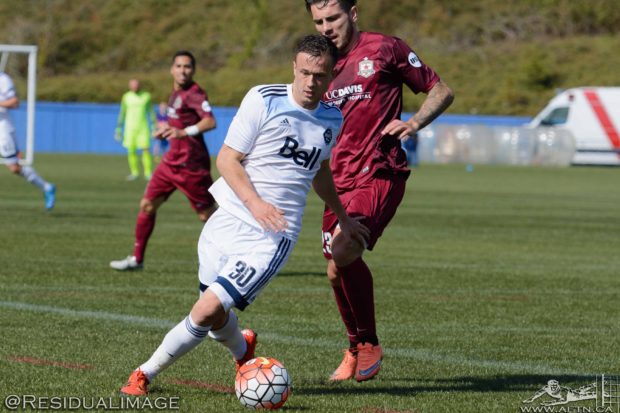 It’s been a tough year for Whitecaps homegrown midfielder Ben McKendry, but one which will be capped off on a very positive note on Wednesday night when he makes his first team debut for Vancouver against Ottawa Fury in the Canadian Championship semi-final.

Last May, after a string of solid performances for WFC2 and his first professional goal, Carl Robinson told us that McKendry was “knocking on my door” for MLS minutes.

The expectation was that McKendry would get the chance to further show Robbo what he could offer the first team with a strong showing in the ‘Caps Canadian Championship games against Edmonton, but that chance was cruelly taken away from him with a knee injury that eventually required surgery and ended McKendry’s footballing year prematurely.

McKendry underwent surgery for a meniscal tear of his left knee in August. The recovery took a little longer than hoped and the 23-year-old was still rehabbing when the ‘Caps preseason camp got underway in January and didn’t make his first USL appearance of the season until week two, when he came on as a late second half sub in Portland.

But after a lot of hard work and patience, McKendry is back to his best and keen to make an impact in Wednesday’s match with the Fury.

“The first thing that comes to mind is that it’s an opportunity for me to showcase myself,” McKendry told AFTN. “I’ve developed a lot, even over the time when I was injured, I was watching, studying the first team games and trying to get better, even though I was not playing. Now, I’m looking forward to being involved and getting some opportunities.”

McKendry has looked excellent for WFC2 so far this season, scoring two goals in his six appearances to date, both of them cracking strikes. A lot of players take a little bit of time to readjust to the game when they come back from a long term injury, but McKendry has looked to be even sharper and hungrier than he was before. He looks to have moved up another level and more than ready for MLS minutes.

“I think I’ve just matured a little bit,” McKendry told us. “That’s been the biggest thing. Last season I think I was a little bit, maybe, overly anxious at times. Now, it’s clear to me what I bring to this club and where I can be successful from the midfield position.”

Robinson has long been an admirer of the Residency alumni. That was what triggered his desire to get McKendry to come out of college a year early and sign a MLS deal. He’s previously told us that he fully believes that the midfielder has what it takes to become a MLS staple for the club in years to come, something which his USL coach, Alan Koch, also has no doubts about.

“We haven’t seen Ben as much as we would have liked,” Koch told AFTN after Sunday’s draw with Real Monarchs. “He’s still been struggling to get through a couple of knocks, then going away with the national team. I thought today he was very, very industrious. He was wanting to get on the ball, he brought a lot of energy to the field. He was one of our best players through the 60 minutes that he played, which is great.

“We continue to see him improve and the more performances that he puts in like today, the more questions he’ll ask of Robbo and hopefully get a chance in the first team at some stage.” 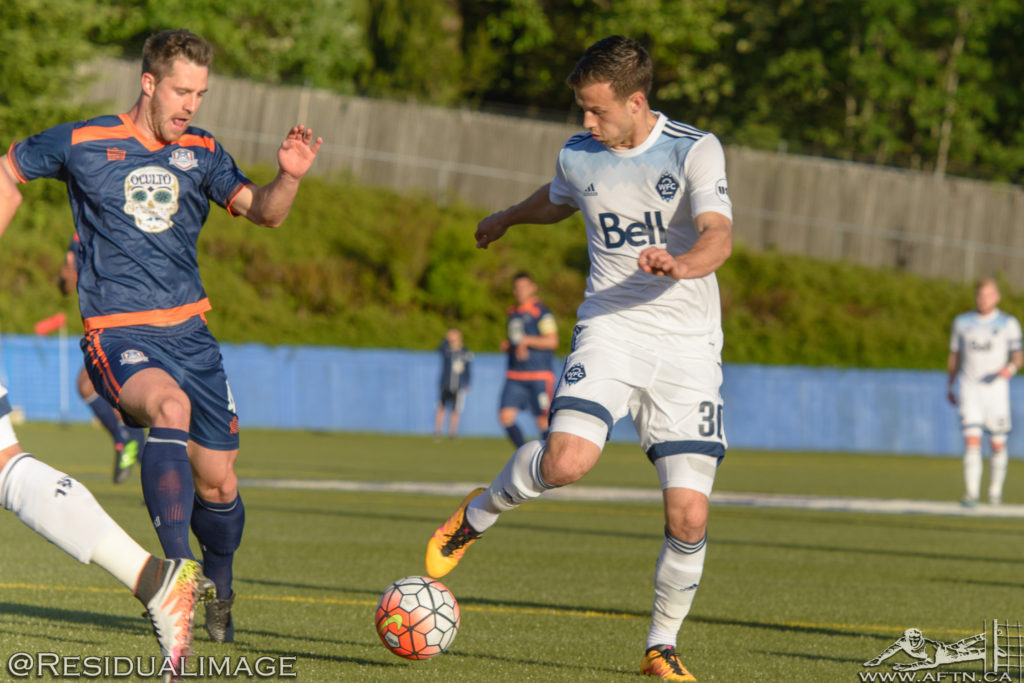 McKendry’s recent performances have also seen him back in the Canadian fold for the first time in over two years.

Having previously worn the red and white of Canada at U18 and U20 level, McKendry hasn’t been involved with the national team program since being part of the U20 team that took part in the CONCACAF U20 Championship in Mexico in February 2013. He scored a goal in the 5-1 win over Nicaragua in his only appearance in that tournament.

U23 coach Michael Findlay included McKendry in Canada’s recent Caribbean tour, with the midfielder scoring in the 3-0 win over Grenada, with a similar goal to his strike against Real Monarchs on Sunday. And overall he found it an enjoyable experience to be back with the national team program.

“It was great,” McKendry said of the experience. “It was good to be in with the national team. The coaching staff were great and the other players were great as well. I guess we have to get used to travelling all over the place. We were in Guyana, which was an interesting experience, then we had to go to Grenada. Getting used to the travel, with being in CONCACAF, is important.”

Experience is all part of McKendry’s growth and going through a long term injury like he did last year has certainly given him a new perspective on things.

It’s also an experience he can draw on to help others, including his room-mate Christian Dean, who agonisingly suffered a knee injury last week in training, just days after returning from a foot injury that had seen the centre back miss out on the year so far.

It’s heartbreaking for Dean, who is one of the most genuine and nicest players you’ll find on the ‘Caps rosters, but McKendry has been there for him at this difficult time and he feels his room-mate will come back hungrier and stronger like he did.

“Yeah, I talked about it a little bit with him,” McKendry told us. “A similar injury I think. He got a little bit on the knee. You’ve just got to stay focused and do what you can to get back as soon as possible. Ice, rest. He’ll be back stronger.”

McKendry’s eyes right now are fully focussed on the next two Canadian Championship games with Ottawa and making a case for his first MLS minutes soon.

That MLS playing time is his key goal, and will remain so, but right now, he’s also thoroughly enjoying being part of the exciting and unbeaten USL side. That’s been helping take his game to that other level, with confidence abounding around the team.

“I think the difference is we go into every single game expecting three points,” McKendry admitted. “Whether on the road or at home here, we expect three points and nothing less. We’re disappointed with a draw. They’re confident.

“The young guys are incredible – Kadin [Chung]. Tommy [Gardner], Alphonso [Davies]. Kyle [Greig] has been a great acquisition. He’s banging in goals. It’s a great group to be a part of.”