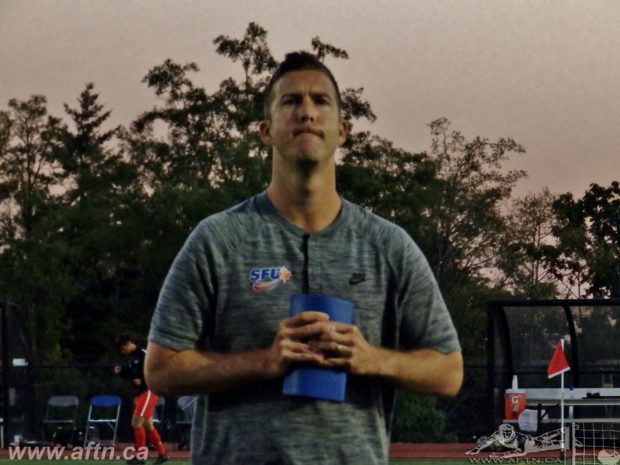 It was all going swimmingly for SFU Clan in the first few weeks of the new season. The Clan followed up an opening 8-0 thumping of the University of Mary with a couple of wins at the Rimrock Classic in Montana, a couple of home wins, and a battling 1-1 draw at the always dangerous Seattle Pacific University.

Undefeated in their first six matches, with a 5-1-0 record, SFU had scored 19 goals and conceded only four. That saw the Clan ranked second in the regional rankings and looking a good bet for a high seeding in the playoffs.

But things can change quickly in the world of college soccer. A surprise 3-2 defeat last Thursday at Portland’s Concordia University was followed two days later by a goalless draw with California State University Dominguez Hills in Carson, in a match that saw the Clan finish with nine men.

Those results saw SFU incredibly plummet from second to a staggering 22nd in the rankings. That seems extreme, but what does a coach say to his squad when that fate’s befallen them?

“You say don’t get caught up in it,” Clan head coach Clint Schneider told AFTN. “At the end of the day, those polls are so irrelevant right now. They mean bugger all. It’s about where you are at the end of the year. It’s just the nature of our sport. It’s very regionalised.

“Nobody sees anybody else play, except a couple of times you see each other, so you’re relying on these people in regional office conference calls to talk about teams and then they talk to guys on the east coast and this is who we like, then the guys down south, and then they come up with the rankings. Again, it’s pretty irrelevant.”

And that’s true. It’s only the conference standings that really matter right now for SFU, and those didn’t make great reading for the fourth placed Clan heading into Thursday night’s game at home to Northwest Nazarene.

Only the GNAC champion gains an automatic postseason berth, after that it becomes something of a crap shoot, a borderline popularity contest. That is where the rankings become far more relevant and could be the difference between a playoff run or an early end to the year.

“At the end of the year we know we just need to win games,” Schneider added. “Just keep winning games and it’ll take care of itself. This group is built to go and play in big games, and the good thing is we have eight big games left. So I anticipate we’ll have the same positive results moving forward, as long as we play well and finish chances.”

And that was the Clan’s downfall against both Concordia and Dominguez Hills in last week’s wobbles. SFU dominated both matches, outshooting the Portland university 24 to 7, and their Californian foes by 17 to 4. But out of those 41 chances, they only had two goals to show for their efforts, and in the tight battle that is GNAC and the West, that’s not going to cut the mustard.

You start to feel that luck has deserted you and wonder how you can go from putting in eight goal performances, where everything ends up in the back of the net, to being kept off the scoresheet altogether.

That made Thursday’s game against Northwest Nazarene a lot more important than perhaps the standings of the two teams would have you believe. SFU were clear favourites, but could they put the ball in the net and take their chances? 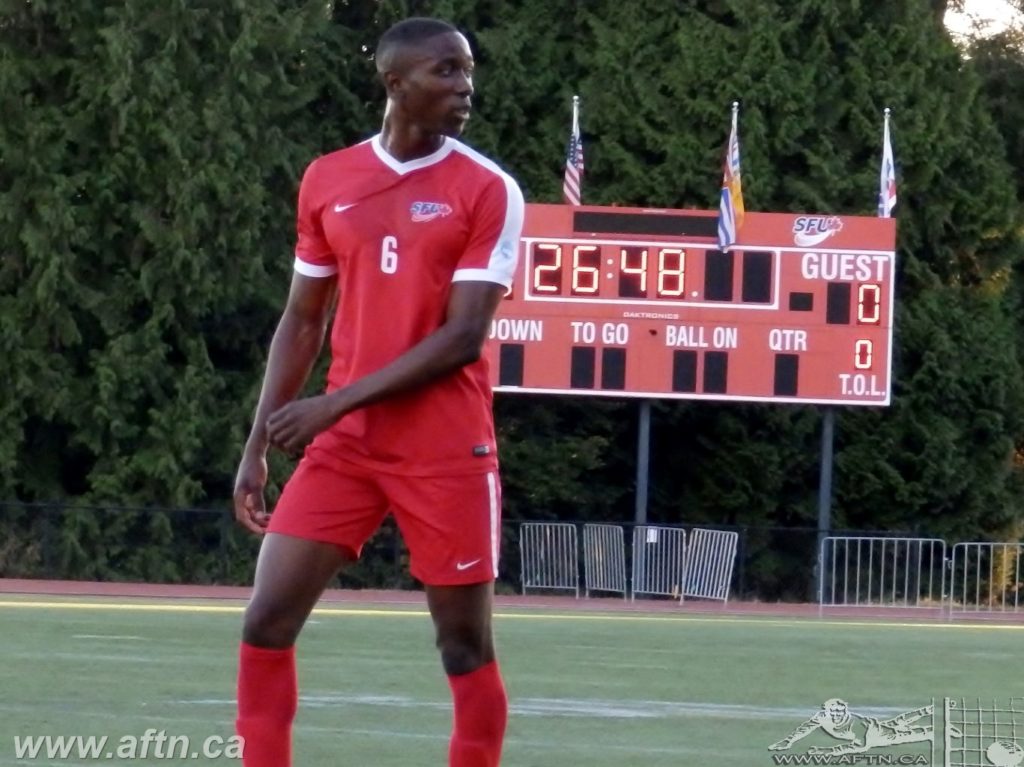 When Mamadi Camara (pictured above) beautifully finished off a solo effort following a turnover in the 19th minute, any fears of another stuttering performance started to disappear, only for them to quickly reappear six minutes later when the visitors equalised with their only shot of the half.

SFU turned up the pressure, but once again the breakthrough wasn’t coming and it took a scrappy poke home from the goalline by Riley Pang to restore the Clan’s lead in the 44th minute. It wasn’t a pretty goal, but Schneider couldn’t care less about that. It was what he’d been crying out for over the past two games.

“The second goal, we’ve needed one of those,” Schneider said of Riley Pang’s scrambled effort on the goalline. “A little bit of luck, some things to go our way. It’s good for Riley to be committed to it, but we’ve been killing for something like that, really since the first game.

“We’ve scored eight and then all of a sudden it’s all gone. We can’t finish a chance. Last game, we hit a post on a penalty kick in a game that we thoroughly dominated and should have scored two or three. We’ll take it.”

But the Clan left it late before killing the game off once and for all. Camara added SFU’s third, and his second, with just 34 seconds of the match remaining, to give the Clan a scrappy, but hugely important, 3-1 victory.

As Carl Robinson said of the Whitecaps this past week. You want to play beautiful football every week and play like Barcelona and PSG, but the game’s about winning, and sometimes, you have to win ugly. By any means necessary. Football’s not always going to be pretty and, whether some fans and pundits like it or not, it’s a results driven business. Coming away with the three points is what ultimately matters.

“So proud of the guys to get a victory here, especially with a couple of players out. It was good. We talked about it a lot, about the guys coming together, regardless. We conceded that pretty soft goal, I think they maybe had one shot on goal, then you had to dig again, battle again, so credit to the lads. Very, very proud of them. That was a good shift against a decent squad, so we needed that, that’s for sure.”

Thursday night’s win, coupled with Seattle Pacific being on the wrong end of a 2-0 scoreline at Western Washington, saw SFU move up to third in the GNAC standings. Just above them are Saturday’s opponents, Montana State Billings.

It’s another massive game for the Clan. Another must win one you feel if they are to keep their championship hopes very much alive. Schneider knows the task in hand and the battle that awaits his squad up Burnaby mountain on Saturday night (7pm kick off).

“[Their head coach] Alex Balog is a good friend of mine,” Schneider said. “They work real hard. They put a shift in for sure. Can be very direct at times, but good at it, and can play a little bit as well if you allow them to. We’ve always had battles with them. If you look at the all time record and it does favour us, but there’s been some close game with those guys and Saturday will be no different.

“It’ll be about who’s winning second balls, who plays the better stuff. I don’t think we played our best stuff against Northwest Nazarene but again, I don’t care. I’m glad we got the win and I’m pleased for the guys we did. It’s really difficult to play consistently well in this game. To have consistent performances. We’ve had quite a few consistent performances but also didn’t have the end result, so to have a game where it’s not our best stuff, but still come away with three, very happy.”