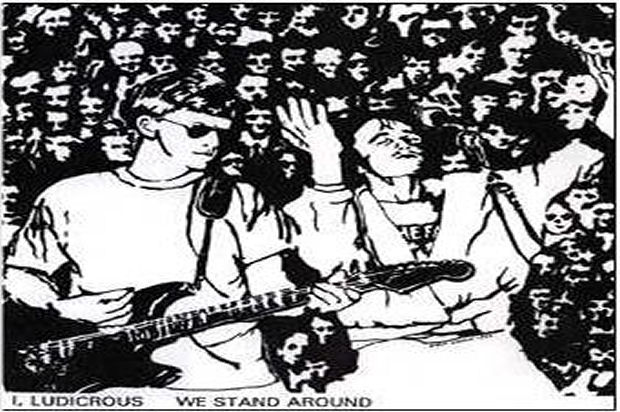 “Sing When You’re Winning” is our series looking at the world of football and supporters’ culture in music, and it gives us a chance to look back at some of our favourite football related songs.

Many of the songs give a nice insight into supporter culture from what often feels like such a different footballing time from the modern day game and a whole culture that is so different to what we have over here.

Following all the groundhopping talk we’ve being doing on our podcast and the Southsiders forum, we continue the series with a 1992 song from two piece (now three piece) south London band I, Ludicrous – “We Stand Around”.

Many people will have first heard the band on the shows of legendary DJ John Peel. He was a big fan of the guys. As is The Fall’s Mark E Smith, who got hold of their homemade four track demo when they were unsigned and promptly booked them to support him in London.

I, Ludicrous have many songs with football based themes on their seven albums, and some others will be popping up later in this series.

“We Stand Around” was released as a 7″ single on Roman Carbage records in September 1992 and features on their fourth album “Idiot Savants” on the Old King Lud label. New Order described the song as their “gloomy but optimistic” single of the week in NME. It was also released in Germany.

The lyrics capture the experience of being a football supporter in the UK during that time period and the wonderful promo video for the single encapsulates that, with crowd shots, being in the pub reading fanzines and doing your coupon and some nice images of what football grounds should look like. Is there a more beautiful site in football than a lit floodlight on a slightly foggy dark evening?!

In the meantime, here’s the wonderful promo video of the single, and, as always, the full lyrics are printed underneath.

A different time and a whole footballing experience which the modern day football fans don’t experience, bar at a few of the lower league grounds in the UK. Here in North American, with our multi million dollar all-seater stadia, it’s like the game on a different planet. That’s not necessarily a bad thing mind you, it’s just some things I do miss. I’m sure that some of the lyrics still resonate with many of us though.

Enjoy your trip to another time. Another planet!

We stand around in wind and rain, locked in voluntary,
All ages, all male, all swearing, all cold.
We sing and sway, we punch the air,
We chant out names, we seek a wave,
In pens we huddle, in corners too,
We shout out names, we shout abuse.

We travel every Saturday,
We go wherever we play and pay,
spending money we can’t afford,
We are the fans, we go everywhere.

In groups of two we punch the air,
We sing and sway and dance and swear,
We taunt the home fans humorously.
The policemen eye us with ill disguised contempt.

Our best players all get sold,
Their replacements old and slow,
The manager raids the Sunday leagues,
We have no youth team anymore.
The team defends most of the game,
We cheer every breakaway, three in the box,
In goes the cross, we hold our breath.
Goalkick.

We stand around in wind and rain,
Locked in we sing and sway.

We buy the fanzine its a con,
Written by some Oxford don,
who thinks he knows what’s going on,
But we know everything.
We know how much the players earn,
where they live what they drink,
What happened on the Swedish tour,
and why the left back was transferred.

We make a scene in every town,
Our accents sting, our voices loud,
Old ladies in shop doors cower,
We are the fans, we have power?
Some have scars of well aimed boots,
Some wear scarves, and some wear suits.
The police escort treats us with ill disguised contempt.

The keeper does his level best,
He’s overworked and overfed,
The shots reign in, we hold our breath,
No offside flag, the bulging net.
No time to restart.