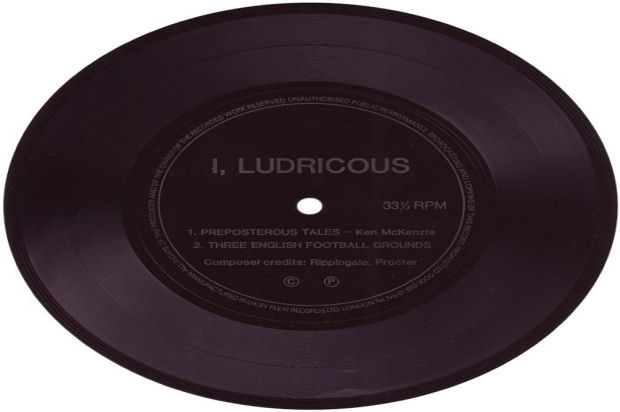 “Sing When You’re Winning” is our series looking at the world of football and supporters’ culture in music, and it gives us a chance to look back at some of our favourite football related songs and give them a virtual spin.

We haven’t done one of these for a while, but a football-less weekend in December, whilst we await the press conference for the new Caps manager seems as good a time as any!

We’ve still got a couple of Groundhopping pieces to run this year from our travels, so as a precursor to those, it was only right to feature a song about football grounds here too. Combine two of our favourite features into one.

With that in mind, there was only one song that could really fit the bill – “Three English Football Grounds” by English 80’s indie band I, Ludicrous.

I, Ludicrous have already featured in the series in Part Four, but with such a wealth of football related songs from the band from us to pick from, this won’t be the last time either.

“Three English Football Grounds” was written in 1987 on a bus by lead singer Will Hung on his way back from a weekend in Manchester where he’d been at a game.

It’s just three simple verses, giving a brief outline and makeshift travel guide to three English football grounds, the teams they host (Millwall, Bolton and Fulham), their fans and that all important commodity, the beer.

The greatness is not just in the simplicity but the fantastic, train like, backing track.

As with so many of the songs we’ve been featuring in this series, it’s music from a different time and an almost unrecognisable era of football. For all it’s faults, it’s still one I miss.

Especially the price it cost to get in to games, as highlighted by the song.

Back in the mid 80’s, it cost £3 to get in to watch Millwall. That would set you back between £19 and £30 now depending on which stand you want, whether it’s a category A or B game and whether there’s any seats or they’ve all been ripped out.

Bolton was the cheapest back then at £2.50. Now tickets start at £23 and it was so much of a pain in the ass to try and find out what they went up to, that I gave up! Of course, Burnden Park, Bolton’s home for 102 years up until 1997, no longer exists. Parking alone at the new Reebok costs £6. Funnily enough though, some things never change as Bolton had just been relegated when the song was written, although at that time to the bottom tier.

The last ground featured in the song is Craven Cottage. Back then, Fulham were languishing in the depths of the English Third Division, which was, and you may find this hard to believe, actually the third division of English Football. No ridiculous names back then.

Still the most expensive though at a whopping £4 to get in. Those rich Londoners. Well they need to be these days as it’s £30 to £70 for a game, depending on the opponents and vantage point. Wowzer.

The song was first released as the b-side to their breakthrough single “Preposterous Tales”, originally released as a free 7″ flexi disc with the fanzine “Blah Blah Blah” in April 1987. It was also included on the re-release of the single as a 10″ in May 1990 and featured on their debut album “It’s Like Everything Else” in 1987 and the best of compilation “20 Years in show business” in 2007.

So, as always, here’s a video of the song, with the lyrics printed below. We’re thinking of doing a new updated version of the song for MLS!

Welcome to the Den, London South-East 14.
Do not believe all you read or hear.
We are not animals, we are human beings.
Our support is loyal, their enthusiasm only leads to violence
as a result of an immense provocation.
Nearest station is New Cross Gate.
£3.00 to get in and the beer is cold.

Burnden Park – home of the Trotters.
The ground stands surrounded by industrial dereliction,
for Bolton is feeling the pinch.
Still the fans have kept their sense of humour.
Although recently upset by relegation.
Nearest station is Trinity Street.
£2.50 to get in and the beer is good.

Craven Cottage. In one corner stands the cottage.
Unique. A reminder of an earlier age.
An age before the violence. Before the air was full of vile oaths.
Opposite sits the brash new stand.
Overlooking the Thames. Smug, expensive, empty.
There’s an electronic scoreboard to gaze at when the play gets dull,
which isn’t often for Fulham play an attractive brand of football
£4 to get in and the beer is great.