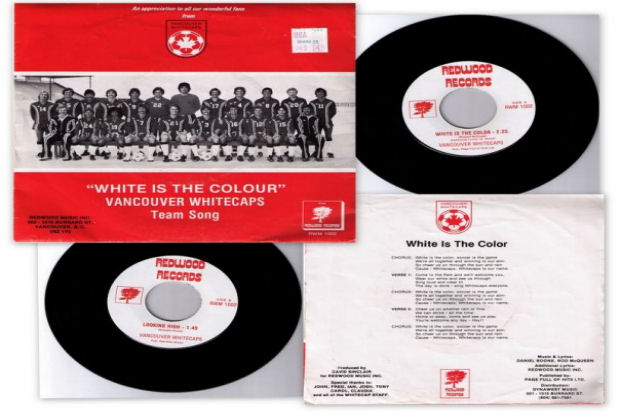 “Sing When You’re Winning” is our series looking at the world of football and supporters’ culture in music, and it gives us a chance to look back at some of our favourite football related songs.

Balancing the modern era of football whilst still making a nod to the past NASL glory days can be a tricky job at times for the Whitecaps.

Many would still like to see a return of the hoop on the jersey, which I’m pretty certain we will see some version of on the away strip next year as part of the 40th anniversary celebrations.

One blast from the past that the Whitecaps have reintroduced this season is the playing of the classic “White Is The Colour” song before matches, complete with retro record player and vinyl and some guest vocalists featuring some of the most off key singing you’ll hear at BC Place (and that’s saying something if you’ve ever stood in beside some of the Southsiders).

“White Is The Colour” has been in and around Vancouver and the Whitecaps since 1978, when the first team recorded a version for the NASL season.

There are probably many here in BC that still think that the song is a Caps composition and don’t know the origins of the track.

The song is a Chelsea song and was originally released in the UK six years earlier, on February 26th 1972. Called “Blue Is The Colour Of Champions”, the 7″ single was released on Penny Farthing Records ahead of Chelsea’s League Cup final appearance against Stoke City, which they lost 2-1.

The song was recorded by the full Chelsea first team squad, which featured a number of players who went on to ply their trade in the old NASL, including the Whitecaps’ very own Steve Kember, who it looks like featured on the recordings of both singles. There’s a quiz question for you down the road.

The release of the Chelsea single is part of what is a UK tradition of crappy club songs sung by out of tune players. I’m not sure how familiar people are here with them but there have been many, many records released by clubs and national teams over the years, usually to celebrate an achievement like reaching the FA Cup final or the World Cup finals.

I grew up listening to the songs. You couldn’t miss them really. It was always just part of the teams’ pre final/tournament routine. They mostly charted quite high. Chelsea’s version reached number 5. It also usually saw an appearances on ‘Top of the Pops’ (a UK music chart TV show back in the day) and they are usually so memorable because they were so bad. “White Is The Colour” is actually a pretty good version of such a single. It doesn’t really have a lot of stellar competition mind you.

Although not as popular or as high profile these days, they’re still being recorded and released. We’ll be featuring some of the ‘best’ ones from through the years in this series down the line.

“White Is The Colour” is a simple song, nearly all of that genre are, and the great thing about it is that you can switch the colour and make it identify with other teams. Football chant perfection, as you can tell from the number of unoriginal songs heard throughout MLS these days.

That’s just what the Whitecaps did and that’s also what many others have done with it before and after them.

The song has been used by the Danish national team at the 1972 Olympics (Red and white) and even crossed sports to be used in the CFL by the Saskatchewan Roughriders (Green). Translated variants of the song have also been used in what was Czechoslovakia, Finland, Japan and Norway amongst others.

It’s definitely a love it or hate it song, but for many, it evokes many memories of bygone days of the Whitecaps’ past. It’s certainly one of my first memories of watching the Caps when I moved over, hearing it blasting out at Swangard Stadium before and after games in the D2 days.

I have to admit I originally fell into the hate camp and thought “what the hell is this”, but that is because I associate it with Chelsea and always will in part. It also seemed so dated, like you were watching a football team stuck in the past. it didn’t feel like you were at modern day football, not necessarily a bad thing in hindsight.

Now I’ve mellowed and see it for the quaint piece of history that it is. It helps that I’ve also become a bitter and twisted old fashioned football fan that sits in my rocking chair on the porch muttering about how football was much better in the good old days..

It’s nice to have your “own” club song/anthem to blast over the PA. East Fife have 60’s instrumental “Telstar”, West Ham are “Forever Blowing Bubbles”, Everton have the old TV show “Z Cars” theme, and Vancouver have “White Is The Colour”. Chelsea still play their version all these years later before every home game.

There are so many other such songs we could have listed. None of them are exactly classics but all of them capture that spirit of the past and connect the old days with modern football. With all that the modern game brings with it that I hate, it’s kind of nice to have this quaintness.

Fife twins, and Hibernian supporters, The Proclaimers re-recorded the song as part of a season ticket promotion by the Whitecaps. Obviously the marketing department back then were thinking ahead to the current Scottish invasion under Martin Rennie.

A limited edition run of 1000 copies of a CD were produced as a free giveaway to season tickets holders, who back then numbered in just the three figures.

I’ve been trying like mad to get hold of a copy so if anyone has one to spare or would like to sell a copy, then please get in touch. Same goes with the original 7″.

The 3 track CD came with b-sides “There’s A Touch” and “Slowburner”, both taken from their flop 2001 album “Persevere”. The Proclaimers version of the song comes in at 1 minute and 46 seconds. The original Whitecaps version comes in at 2 minutes and 25 seconds, and the Chelsea original was 2 minutes and 21 seconds.

The CD wasn’t all that Caps season ticket holders could get as an incentive that season.

With every pair of season tickets bought, they were able to buy tickets for a special intimate acoustic show with the Proclaimers at Richard’s On Richards, a venue I miss dearly.

Two days after the show, the Whitecaps kicked off their 2002 regular season against Minnesota Thunder on May 3rd and the Proclaimers made a special appearance to play ”White Is The Colour”. If anyone has any memories of that, or photos, then let us know.

As for their version of the song, the band knew it was all just a bit of fun and not exactly going to win them any awards or accolades.

“It’s a soccer record, it’s not necessarily going to win a Grammy, but it’s a track to vibe the team up, which is what we serve to do.” was singer Charlie Reid’s thoughts on the recording at the time.

Even all these years later, this seems to be the same feeling in the Caps marketing department and it seems to have gone down well in the main.

The Proclaimers are coming back to Vancouver on Wednesday August 28th for a date at the PNE. With their song “500 miles” already being in the Caps supporters’ songbook, can we get them to play it live again? We’ve already put out feelers to their management! Maybe they can even hang around Vancouver for four days and perform it at BC Place when the Caps take on Chivas.

Come to the park and we’ll welcome you,
Wear our white, and see us through,
Sing loud and clear till the day is done,
Sing “Whitecaps” everyone.

Cheer us on whether rain or fine,
We can shine, all the time.
Home or away come and see us play,
You’re welcome any day. HEY!