One of the great additional attractions of the MLS Cup is the Supporters Summit that takes place over the same weekend.

Supporters mingle, bond and share common grievances, whilst also getting the chance to put some of these concerns to MLS officials.

AFTN really must make the trip some time soon. It’s the Scottish ideal to be where the freebies are after all!

This year’s Summit drew many fans down to southern California and one of them was Vancouver Southsiders Vice-President Brett Graham.

Each year the supporter groups of the home team work with their club and the MLS to plan the weekend activities. This year one of the LAG’s supporters groups, the Angel City Brigade, were our hosts. This meant they had the task of selecting the hotel, organizing our meeting and socializing. 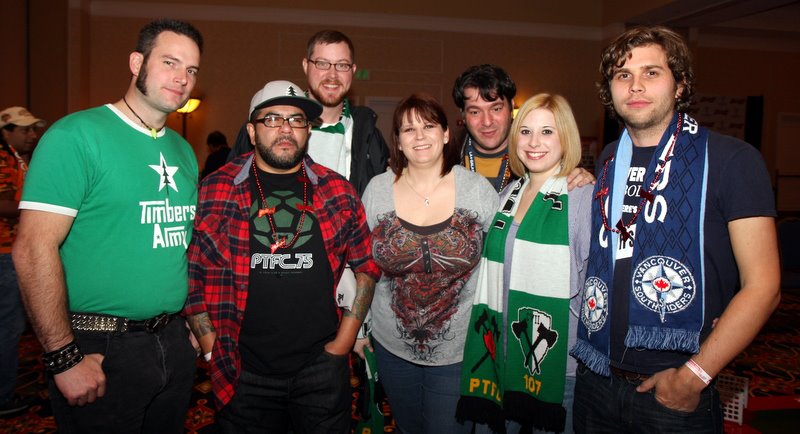 The 2011 Summit was attended by supporters from all MLS clubs, with the exception of FC Dallas, as well as a number of supporters of NASL and USL sides.

I was lucky enough to have attended this weekend and represent the Vancouver Southsiders. This is my story:

I flew down to Los Angeles from Bellingham on the Friday. This a feat I managed by convincing the Homeland Security agent at the border that Major League is a real thing, and the TSA agent that I wasn’t a terrorist trying to blow up the plane with a stack of papers on balanced schedules. When I arrived in LA it was sunny and 17 degrees, quite a contrast from the snow I left behind in Vancouver.

That evening league sponsor, Budweiser, were throwing a party at our hotel. Not only did it include free beer and food, but also allowed us to see how Budweiser is made and allowed us to play Poolball.

Poolball is where nightlife and football combine in a giant pool table, where soccer balls are kicked instead of pool balls hit with a cue. 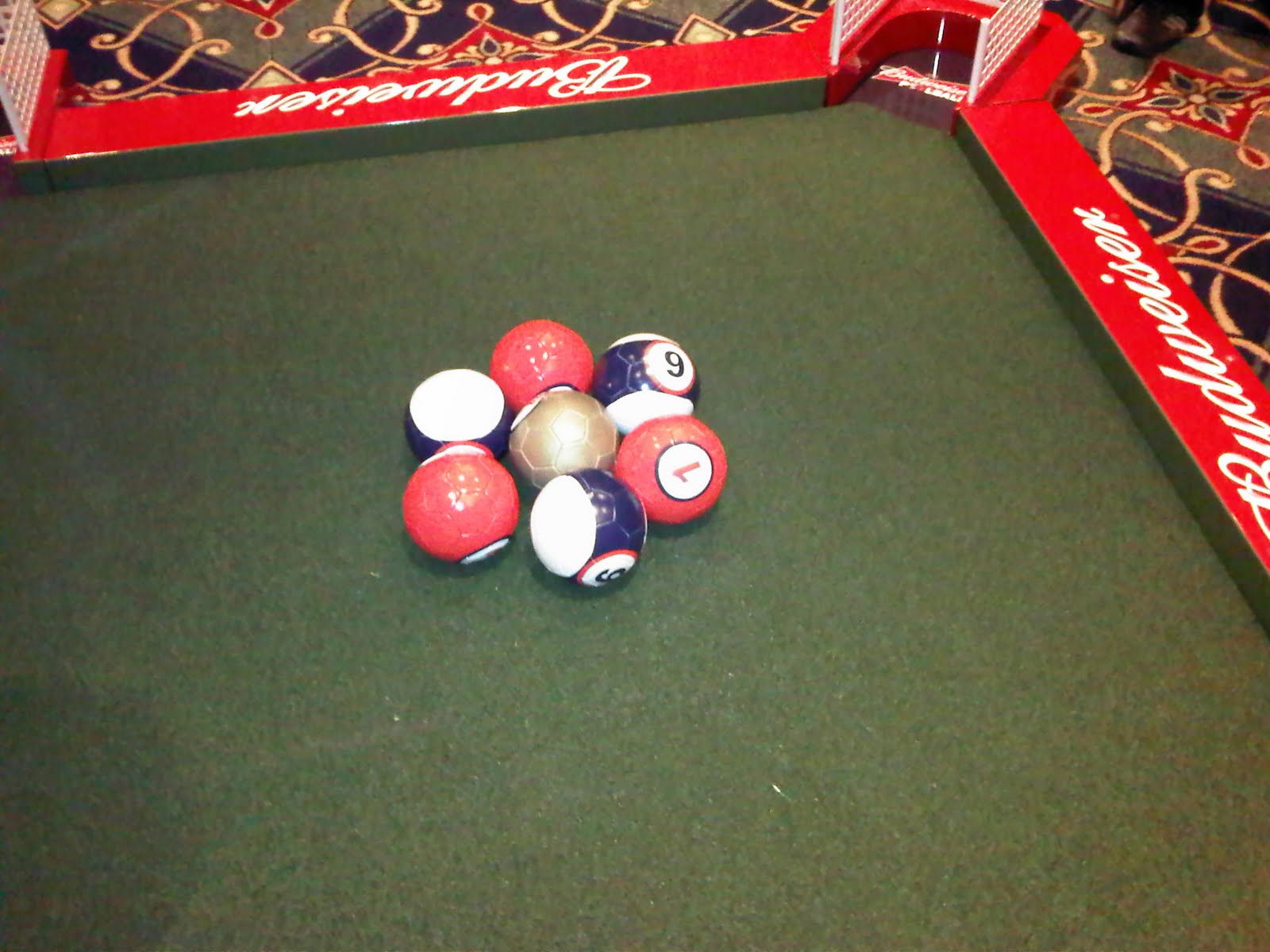 I must admit I likely am the worst player in the brief history of the new sport after I scratched on my second kick of the ball.

As much as ‘How to Make Budweiser’ might sound like an advertisement for real beer, I have to say it was the highlight of the night. We were given four bottles of Budweiser in different stages of its production and little cups of the ingredients. As each process was explained we were encouraged to taste the barley, rice, hops, and the beer at that stage. It was really cool.

The night ended with a raffle of items donated by the supporter groups with proceeds going to MLS WORKS. Although I must admit that despite buying a large number of raffle tickets, I had already been convinced to join a much smaller party upstairs before the draw started.

On Saturday I woke up blurry eyed and headed to this really sweet Mexican restaurant, with a life size ‘gold’ statue of a football player in the lobby, just a few blocks from the Home Depot Centre for the third Annual Independent Supporters Council meeting.

This meeting was attended by just the Supporters Groups and a full agenda of items important to the fans were discussed. At the meeting I was joined by La Doce’s Massimo Cusano, and the two of us combined to start a discussion advocating a balanced schedule.

Hearing about what issues were important to the other groups was not only interesting, but also very helpful for me as one of the leaders of the Southsiders. Learning from the experiences of others can only help our group. For people less involved, the food was great and there was a great selection of cheap beers.

Next up was a lunch and meeting between Supporter Group leaders and Club liaisons in the Presidents Club of the Home Depot Centre. 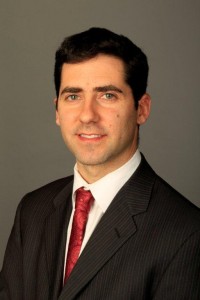 This meeting was chaired by Evan Dabby, MLS Senior Director of Operations, and included discussions on everything from away allocations, to the schedule, to changes in the format to the Summit itself.

The meeting was extremely productive as it allowed views to be shared between all groups. Not only did the supporter groups get to tell all the club representatives exactly what their feelings were, but it allowed them to tell us their views in return.

At this meeting I really pushed my Balanced Schedule paper. I truly believe that through meetings like this a lot can be accomplished in helping both the supporters and the League in getting what they want and where they ultimately want to be.

That evening the Angel City Brigade had organized a pub night out by the beach. Even better they had arranged a bus to constantly loop back between the party and the hotel. But even better still, there was booze on said bus!

Before that though Massimo and I went downtown to meet the Whitecaps Front Office for dinner at their hotel at the Westin. While a lot of the days topics were revisited from a local perspective, it was a far more social affair and great fun.

There are a lot of great and fun people working for our front office and it is nice to see them outside of a work context. The hotel also was the Official Hotel of the MLS Cup Final so all the glassware was branded, I’m not exactly sure how it happened but four pint glasses ended returning back to Vancouver with me!

After Dinner we returned back to our hotel, before jumping on the party bus with some new friends from Houston and heading out to see the band. Unfortunately by the time we got there people had moved on down to the Pier, a district just down the beach that was filled with nightclubs and beer halls.

I was able to find a group of Portland, Chivas, Colorado, Toronto and Chicago fans all hanging out together at an Irish pub and many pitchers of beer, onion rings, and stories were shared until we had to walk back to get picked up by the last party bus at 2.

Back at the hotel we were invited to an after party in a Chivas fan’s room which lasted until almost 5am when hotel security shut it down.

On Matchday, to be honest, I felt like death. 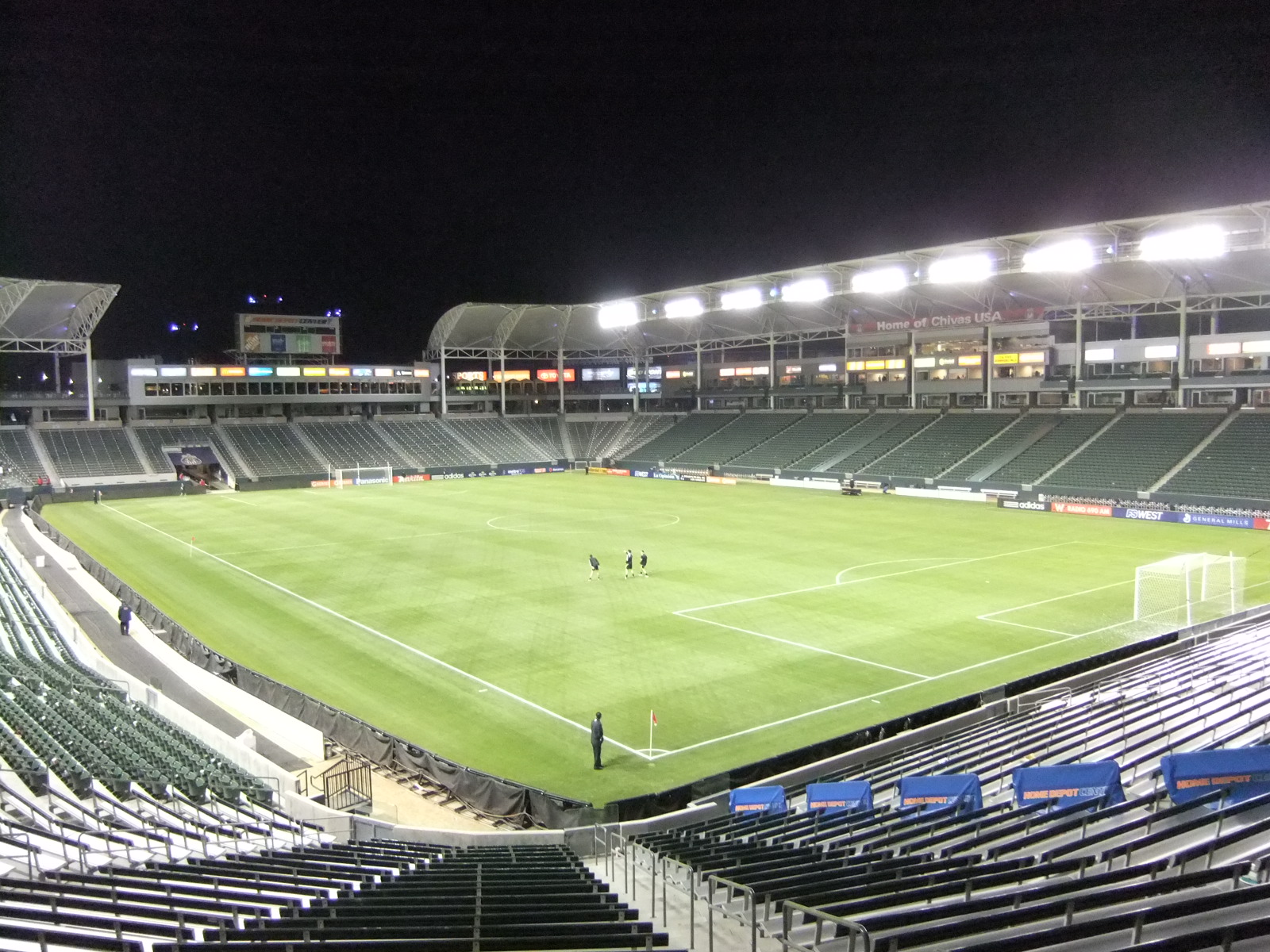 After a quick meeting in the hotel lobby about updating the Supporters Shield we were off to the Home Depot Centre for the big Don Garber Event. Unfortunately it was pissing down with rain, and we were seated outside for it.

Garber’s question and answer session really allowed the fans to voice their displeasure with the new schedule. I was both proud and slightly embarrassed when people started bringing up my paper on Balanced Schedules and holding them up in the air. Although I really didn’t like a lot of what he had to say, I have to admit I have great respect for the man for his willingness to put himself out there. After Garber’s session there was another with another group of League managers.

Following this all the fans received a free scarf and a lunch provided by a League sponsor. At this time everyone headed out to the massive tailgate being thrown by the LA Supporters. Everyone except for one supporter from each club who would take part in a pre-match presentation and who then spent the next two hours rehearsing in the pouring rain.

After that was finished though we joined the others at the tailgate. By then it was in full swing. On the other side of the parking lot all the League sponsors had pavilions set up. Myself and two girls, one from Colorado and one from Portland, went around collecting as much free crap as we could. I ended up with everything from scarves, to kit-bags, to tequila before heading back to the tailgate.

Before the match I had the great honour of representing the Vancouver Whitecaps on the field in a pre-match presentation. It involved me walking onto the field with a Whitecaps flag with 17 other supporters each representing their clubs … well except for Dallas whom didn’t have any fans at the match and thus actually were represented by a cute Timbers fan!

The match itself was pretty uneventful. As you know Houston were dreadful on the attack and the LA Galaxy were a far better team.

After the match we headed back to the hotel to get cleaned up for the after party downtown at Staples Centre. What an amazing experience that was. 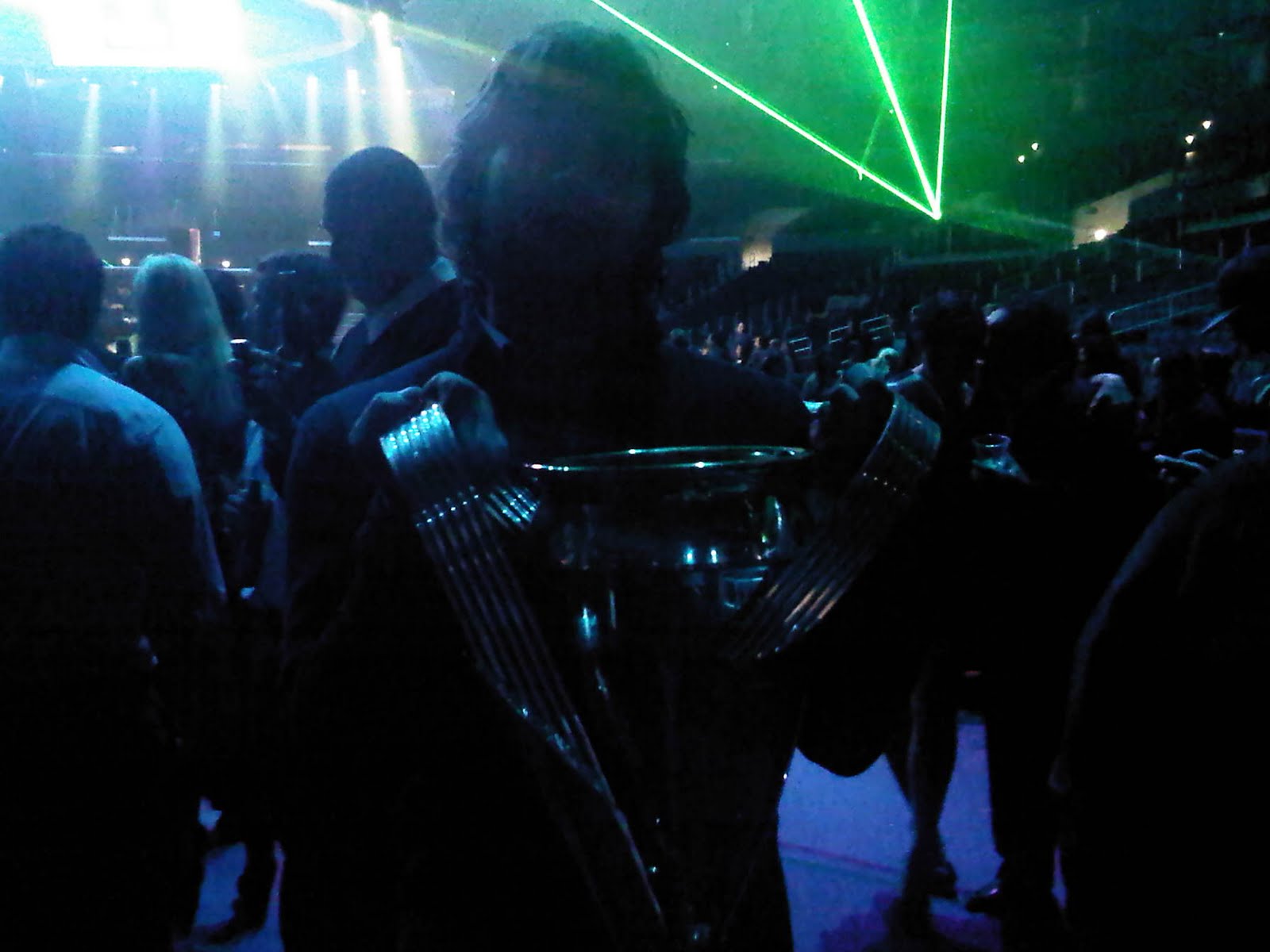 The entire floor of the arena had been converted into a massive nightclub with a massive round stage in the centre. There was free food, free booze and it was DJ’d by Will I Am.

The players were all in a roped off section celebrating with the trophy and we had a grand time. It was pretty spectacular.
I even managed to get a picture with the MLS Cup.

Monday it was back home but not before some last pints at LAX with some new and old friends.

The MLS Cup weekend was a fantastic experience and I would strongly recommend it to anyone who is a fan of Major League Soccer. It is a great balance of productivity and partying.

This was the second Summit that I have attended and I will be back again next time. Why don’t you join me?