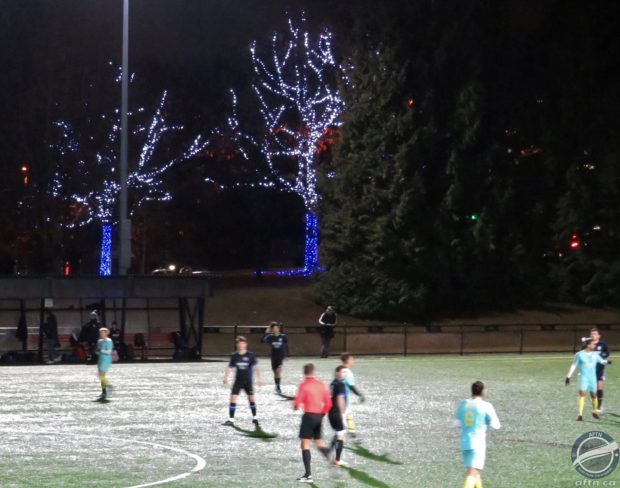 The snow wiped out all of the Week 13 Vancouver Metro Soccer League (VMSL) Premier Division action last weekend and the weather’s effects are still going to have an impact on some pitches around the lower mainland this weekend.

So while that obviously means no recap, it does let us round-up the Week 12 action from the weekend before that we ran out of time to bring you last week.

Although the standings don’t quite show it due to BB5 United CCB’s three games in hand, it was really a top of the table clash at a chilly and very Christmassy looking Cunnings Field in Coquitlam on Friday November 25th.

Current league leaders Coquitlam Metro Ford Wolves played host to defending champions BB5, with an eight point advantage over the Surrey side but knowing that if they win their games in hand they’d be knocked off stop spot. And the two teams served up an absolute cracker of a match that fully lived up to its billing as the Match of the Week, if not the month. sharing six goals and the points between them. 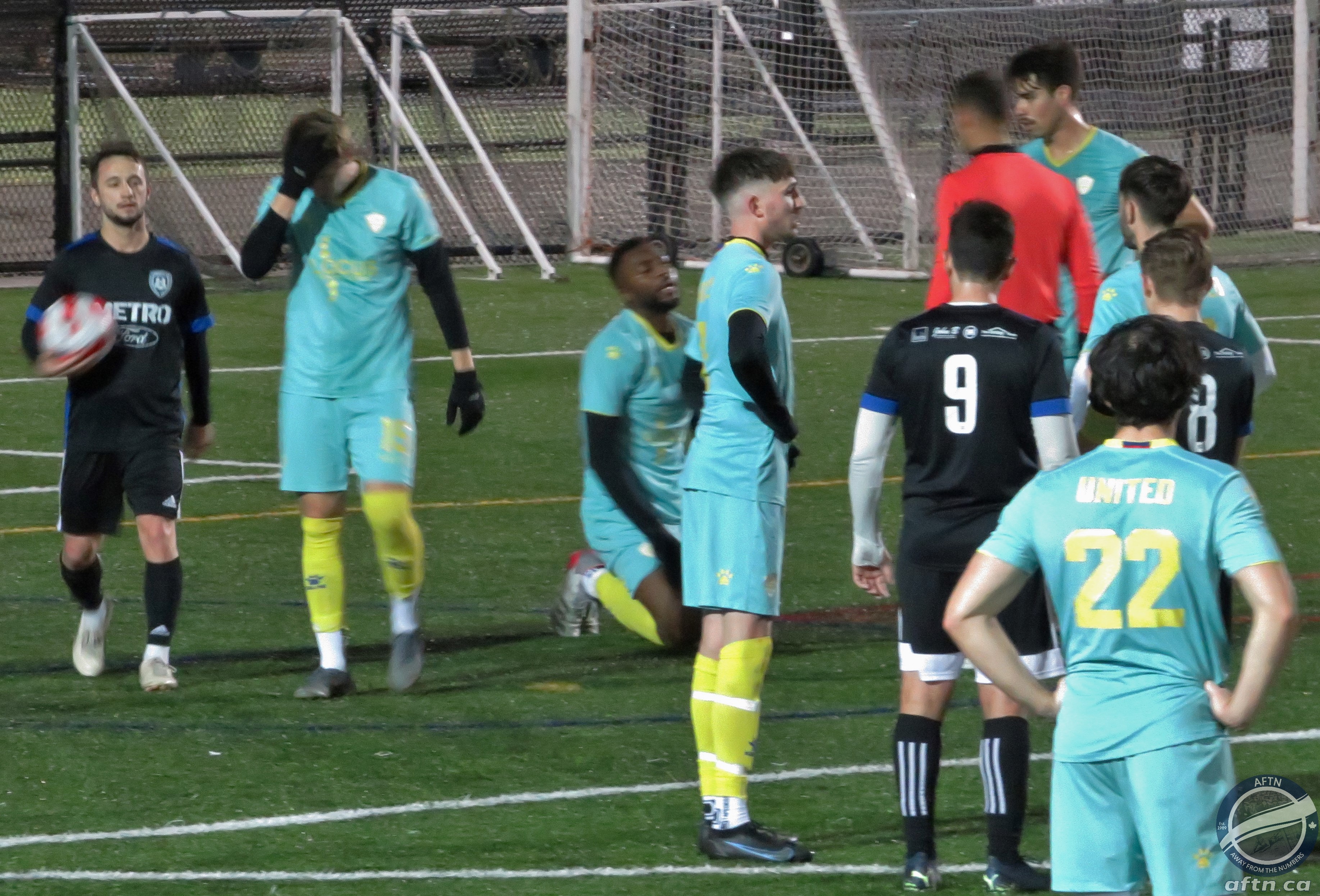 BB5 almost scored straight from the kick off, with an audacious chip earning a corner, which was then put in the net but questionably ruled out for an infringement in the box.

The Surrey side eventually got their breakthrough from a Riley Pang shot in the 10th minute and when Nic Morello tucked away a loose ball in the box with nine minutes of the half remaining, things were looking good for BB5. But Metro Ford came storming back in the second half, pulling one back through Carlo Basso five minutes after the restart.

Thomas Powell scored an absolute stunner with 15 minutes remaining to level things up and set up a barnburning finale. Devin O’Hea must have thought he’d earned all three points for BB5 with a great individual goal with five minutes to go, cutting inside and going past two players in the box before firing home, but the league leaders had other ideas and the Golden Boot leading Jovan Blagojevic bundled the ball over the line from a corner for his 11th goal of the season and a share of the spoils in a highly entertaining match.

You can see our highlights of the game on our YouTube channel and in the video below:

The other match on that Friday was at the other end of the table and Columbus FC came away with all three points in a 3-2 victory at Newton against bottom side SFC Pegasus, in a game which could be very important come the end of the season. Gurmaan Jhaj opened the scoring for Pegasus from the spot in the 36th minute and when Tyreese Meas added a second nine minutes into the second half, it was looking good for the Horsemen. But Columbus came storming back and Matthew Chow pulled one back from the spot in the 72nd minute. Three minutes later and they were level through a Adriano Clemente goal and John McEown won the match for Columbus with an 89th minute winner to give them a big seven point advantage over Pegasus.

Saturday saw four games, with a 9th minute Connor Robillard goal giving West Van a narrow 1-0 win over Croatia SC in the first game of the day at Empire.

Coastal and BCT Rovers Hurricanes played out a 1-1 draw at South Surrey, with Taylor Richardson putting the home side into a 26th minute lead before Javid Khan levelled for the Hurricanes 10 minutes into the second half.

Inter EDC kept the pressure on at the top with a hard-fought come-from-behind victory over Westside at the Point Grey turf. Two goals in a two minute spell from Daniel Accettura and Taiga Nakamura gave Westside a half time lead but Burhan Waisy pulled one back for Inter just before the hour mark and Edris Najm tied things up in the 63rd minute. The winner came from Cesar Aldea Cona 10 minutes from time to move Inter into joint second in the table, five points behind Metro Ford.

The final game of Week 12 saw a comfortable 3-0 victory for VUFC Hibernian at Port Moody. Mario Kovacevic poked Hibernian ahead from six yards out just two minutes in and added a second in the 53rd minute with a lovely chipped goal. Patrick Braun secured the points with a nice finish after being played in with five minutes to go.

You can see Sports Revolution’s highlights from the match below:

So after that action, here’s how the VMSL Premier Division standings are looking: 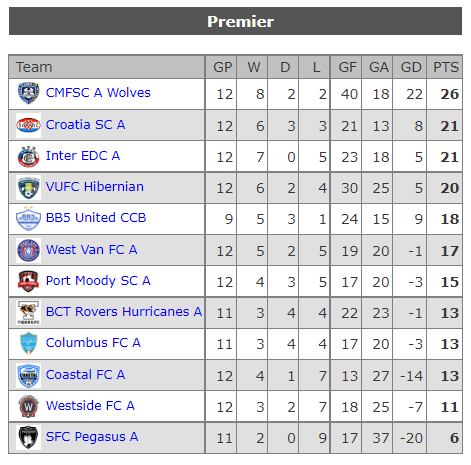 Things are shaping up nicely for a very exciting second half of the season, which could potentially be made even more so if the weather keeps disrupting things.

The pitches at Burnaby Lake don’t seem to have been cleared, somewhat bizarrely, in time for this weekend, seeing one Premier game falling foul, but here’s what else is in store over the next four days: 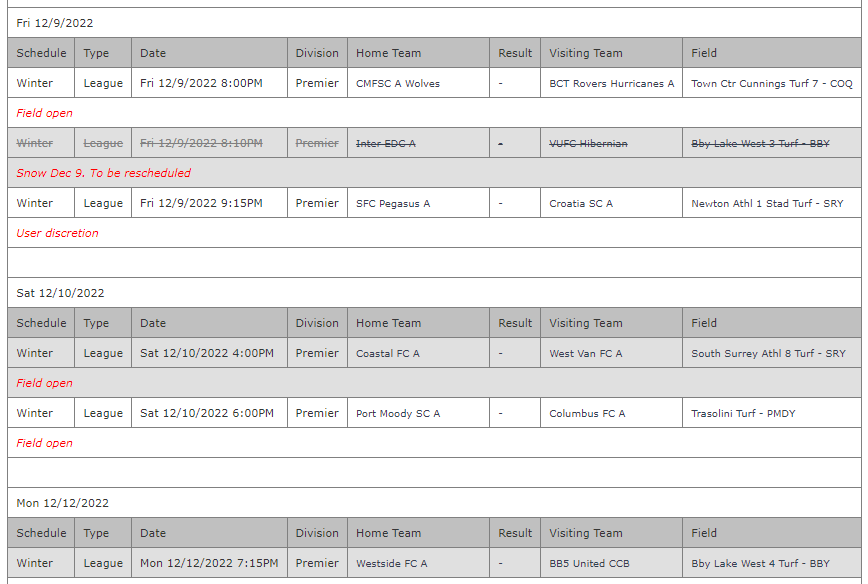 You can find all the latest results, fixtures, and standings across all of the divisions on VMSLsoccer.com and catch highlights from other recent matches on the Sports Revolution YouTube channel.