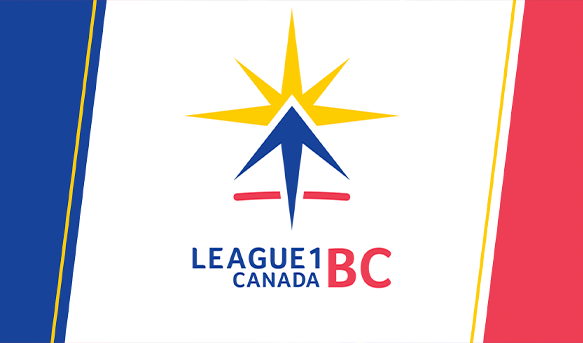 The inaugural League1 BC season kicks off in one calendar month. Seven men’s and seven women’s team will battle it out for the exclusive bragging rights of becoming the league’s first champions and with the squads starting to take shape and the excitement building, L1BC is a more than welcome addition to British Columbia’s summer sporting landscape.

But it’s also a lot more than that. League1 BC is the semi-pro stepping stone league that has been badly needed in this province for years. A top level summer development league in BC bridging the gap between the youth and college game and the professional ranks.

You just have to see the success of League1 Ontario and how many players have been brought through that system to play in Major League Soccer, the Canadian Premier League, and elsewhere, to see how important a league like this is. We now have that pathway here in BC.

Adding to that came the important announcement from Canadian Soccer Business, in partnership with BC Soccer, Soccer Québec, and Ontario Soccer, of the formation of League1 Canada, an alliance of Canada’s existing provincial Division III Pro-Am men’s and women’s soccer leagues: League1 BC, League1 Ontario, and Première ligue de soccer du Québec (PLSQ).

The three partner leagues want alignment on the sporting pathway for Canadian men and women to develop and transition to the professional level, with the benefits of sharing best practices, alignment in league logos (the PLSQ will transition in 2023), and the opportunity to create the potential for national commercial partnerships through a series of national tournaments, competitions, and activations. The first of those will be a four team women’s inter-provincial championship in Lavel, Quebec from August 12-14. 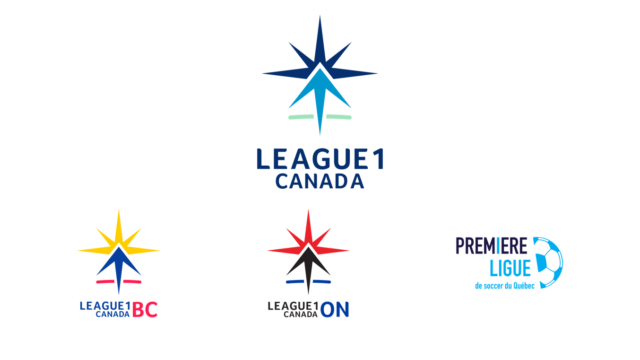 It’s certainly exciting times for football across Canada right now and the League1 BC action will get underway on Sunday May 22 with six matches and it’s perhaps only fitting that the two teams kicking everything off will be two established sides in the BC soccer landscape, with Vancouver Whitecaps taking on the Victoria Highlanders at UBC’s Ken Woods Field.

The ‘Caps and Highlanders women will have the honour of christening the league at 10am, followed by the men at 12.30pm. Later that opening day, TSS Rovers will host Unity FC at Swangard Stadium in Burnaby and Rivers FC take on Altitude FC at Kamloops’ Hillside Stadium.

The regular season will run from Sunday May 22 to Sunday July 24, with each team playing a 12 game schedule, six home and six away. The top two mens and womens teams will then fight it out in the championship games, aptly on BC Day, Monday August 1.

You can find the full men’s schedule, with venues and kick off times, HERE and the women’s one HERE.

We’ll be bringing you L1BC coverage all season long here at AFTN, both on the written site and on the podcast, and to get your excitement levels for the league’s kick off up to fever pitch, we’re going to bring you a comprehensive build up to the season over the next month, with squad breakdowns, coach and player profiles and interviews, some announcements along the way, and we’ll even take you on a groundhopping tour of the seven stadiums that will be playing host to all of the action. We’ll be bringing you something either daily or every other day, so keep checking back.

But for those of you still unfamiliar with the new let’s start things of with a quick primer of all seven teams that will be battling it out this year: 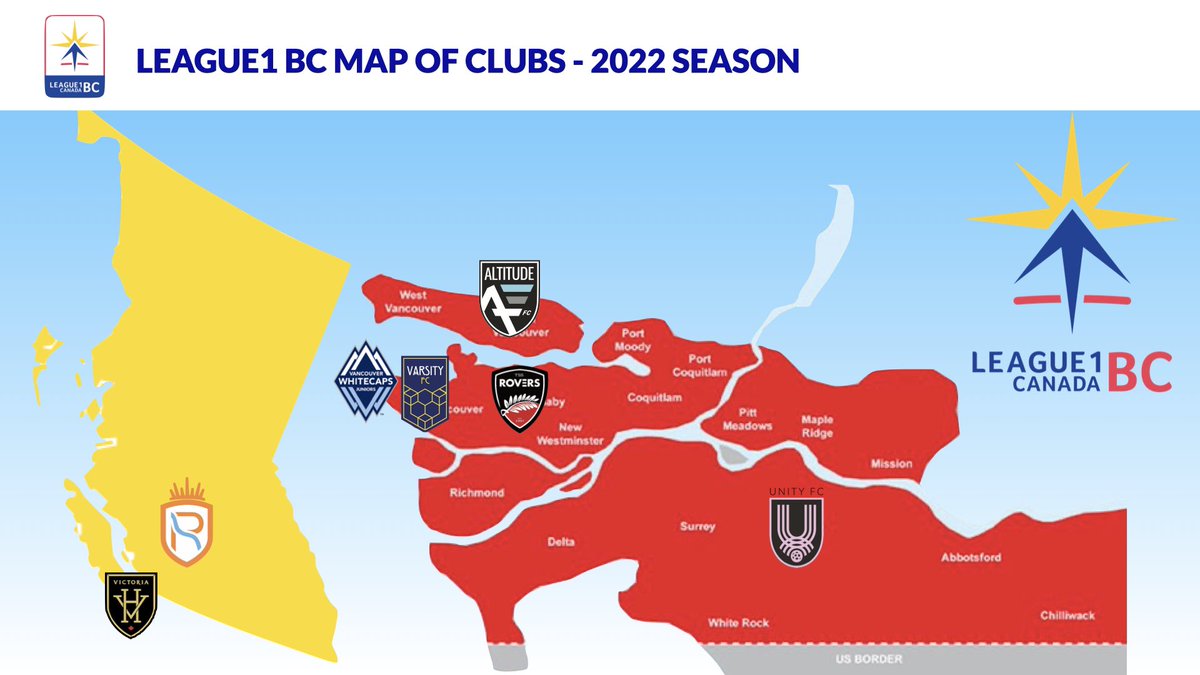 Map graphic courtesy of League1 BC 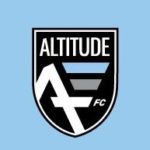 Team Makeup: Formed by Faly Academy and a group of local investors, Altitude are the league’s North Shore representative this season. Based in North Vancouver, the club aims to attract support from the entire North Shore, from West Van to Deep Cove, and on to Sea to Sky country, while working closely with a number of local youth clubs to provide a pathway from the youth ranks into L1BC.

The club have been one of the most active on social media so far, announcing a number of business partnerships with the likes of shirt sponsors Darwin Construction, Macey’s Sports, Whistler Brewing Company, and Blue Shore Financial.

Players-wise, the announcements are still coming but so far it is an interesting mix of PacWest players, including several from the local Capilano Blues, college talents returning home for the summer, and graduating players from the Faly Academy. 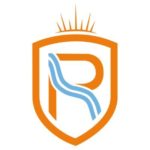 Team Makeup: Affiliated with the Thompson Rivers University Wolfpack, and led by the university teams’ two existing head coaches, Rivers FC are the league’s sole interior representatives this season and will be hoping to attract fans from across the region, along with existing supporters of the Wolfpack.

The team are still announcing their roster, but the vast majority of their teams will come from the two Wolfpack squads, supplemented by local college players returning home to the area for the summer, some local youth club call ups, and the odd surprise signing such as former Whitecaps academy and Cavalry FC player, Jose Hernandez.

The club will also be operating a reserve side, Rivers II, in the Pacific Coast Soccer League this season and have already announced a partnership with local youth club Thompson Okanagan FC. 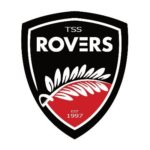 Team Makeup: After three years in USL League Two for the men and one in the WPSL for the women, TSS now get to play in a league in their own backyard and they’ll be looking to build on the very solid foundations they’ve already laid, including becoming the first supporter owned club in Canada.

With a large existing fanbase, TSS are likely to be one of the best supported clubs in the league and that support could prove to be an added boost for the team on the pitch over the season, with their younger U21 players gaining great experience in the local Fraser Valley Soccer League this past winter season.

The 2022 Rovers will be made up of a combination of returning players from their USL days, academy graduates, and a good mix of U SPORTS and NCAA players, including a large splattering from SFU and the University of Fraser Valley Cascades. 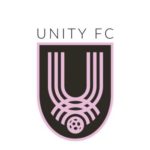 Team Makeup: Formed in partnership with Trinity Western University Spartans, and led by the university teams’ two existing head coaches, Unity FC are the league’s sole Fraser Valley representatives this season and like Rivers FC, they will be hoping to attract fans from across the region, along with existing supporters of the Spartans.

The team have been quiet on social media, preferring to do their build up work behind the scenes but they very much want the club to have a big community impact, so expect a lot of great initiatives to make that happen. And with a CPL team coming to Langley next year, also expect a close tie in and possible pathway between the two teams.

As for Unity’s teams, the vast majority of players will come from the Spartans men’s and women’s sides, with a couple of additions, and they’ve just started the squad announcements. The Spartans women had an unbeaten Canada West season and narrowly lost the U SPORTS championship game so will be one of the big favourites to continue that form in L1BC.

Team Makeup: The Whitecaps were the first team announced for the new league and L1BC will be the club’s summer home for their U19 academy sides.

The Girls Elite Rex program has needed an outlet like this for an age, while the male U19 side had been playing in the USSDA pre-Covid and played the past winter season in the Fraser Valley Premier League against much more experienced and older players on the whole, finishing third. 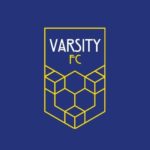 Team Makeup: Formed in partnership with the University of British Columbia Thunderbirds, and led by the university teams’ two existing head coaches, Varsity FC will be one of two teams playing out of the UBC campus, along with the Whitecaps.

The bulk of the team will be players from the Thunderbirds, with some alumni and other local players also in the mix. The men are coming into their first L1BC season in excellent form, with many of them playing for VUFC Hibernian in the Vancouver Metro Soccer League, where they finished second and won the Imperial Cup.

The women had a strong Canada West season, just losing to Trinity Western in the championship game, and will certainly be a force to be reckoned with this year. 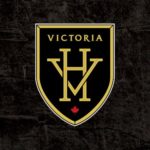 Team Makeup: Led by the current men’s and women’s coaches from the University of Northern BC Timberwolves, the Highlanders are back for their first season of football at this level since the 2019 USL League 2 season and will be the sole Vancouver Island representatives in L1BC this first year.

The club are just beginning to announce their rosters, but expect a good splattering of UVic Vikes and UNBC Timberwolves players, along with players with local connections, and the team will be working hard to build a pathway between island youth sides and the club for future seasons.