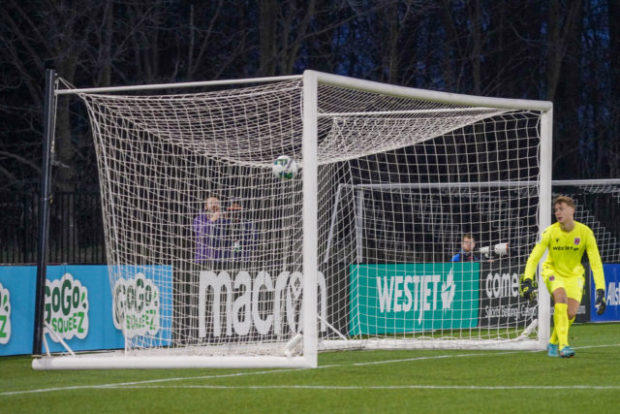 Cavalry FC’s winless start to the 2022 Canadian Premier League (CPL) season continued on April 22, with a 2-0 blanking by York United.

The loss at York Lions Stadium means Cavalry currently sport a 0-2-1 record, after opening the 2022 season with three consecutive road fixtures. The Calgarians are currently at the bottom of the CPL table, with one point, two goals scored, and five goals conceded after three games. The only other CPL teams still seeking their first win of 2022 are Forge FC and Valour FC, who are both in action this weekend.

A miserable night for Cavalry ended without a single shot on goal against York goalkeeper (and former Cavalry stopper) Niko Giantsopolous. In 90 minutes, the visitors mustered five shots, compared to 17 by the hosts.

They also generated just three corners, collected five yellow cards – for the second game in a row, all three of Cavalry’s back line received a booking – and committed 15 fouls. Cavalry’s lack of offence came despite boasting 61 per cent of possession.

“I think the right team won, so we’ve got no complaints,” said Cavalry manager Tommy Wheeldon Jr. in a post-game address. “This is football – you have to put your hand up when you don’t deserve to win. I don’t think we deserved to win because their details were right.

“We dominated in possession, but possession is the worst stat to have because it can make you vulnerable, and they just countered very well. [York] were defensively organized and they deserved the three points. This was the first time they’ve beat us, so we have to take it on the chin and say well done.”

After a cagey start to the match, Isaiah Johnston came close to pulling the Nine Stripes ahead in the 18th minute. The 20-year-old Mississauga native took down a pass, turned Mason Trafford, and then fired his shot toward goal, but it was pushed away by Cavalry keeper Julian Roloff.

When he was a Cavalry player, Minatel earned the nickname ‘The Brazilian Ghost’ for his ability to flash into the 18-yard box and poach a goal from a nothing situation. He showed that ability once again on this goal, sneaking in front of centre back Daan Klomp and directing his header into the bottom-left corner of Roloff’s goal.

Sensing the need to make some changes in the second half, Wheeldon Jr. subbed in 17-year-old winger Jean-Aniel Assi for striker Myer Bevan and brought on José Escalante for Ben Fisk at the hour mark.

The changes did little to improve Cavalry’s play, however, as the visitors’ attacks continued to fizzle out. In the second 45 minutes, the Cavs generated just a single shot.

York continued to look dangerous meanwhile, and their efforts paid off once again in the 73rd minute.

Nine Stripes forward Rosario Osaze De Rosario continued his fine start to his CPL career with his second long-distance goal in two games to double the hosts’ lead. He collected a short pass from Diyaeddine Abzi after a long-ball forward from the defence, touched it toward goal, and wasn’t closed down 25 yards out. Despite the distance, he picked the bottom left corner of the Cavalry goal beautifully, with a shot that bore a striking resemblance to his goal against FC Edmonton last week.

Assi did come close to pulling one back for the Cavs in the 85th minute. Collecting a long ball forward, the 17-year-old used his chest to push the ball into space and round an on-rushing Giantsopolous, but the CF Montreal loanee’s shot ricocheted off the outside of the post.

Cavalry players’ frustration grew increasingly apparent after going down 2-0, illustrated by a minor dust-up involving players and staff of both teams by the technical area in the 88th minute. The mini brawl appeared to initiate after a tackle by Escalante on York’s Sebastian Gutierrez, and a staff member’s subsequent attempt to roll the injured player back onto the pitch. Escalante was eventually issued a yellow after the dust had settled.

Five minutes of stoppage time were added, but York’s defence was easily able to withstand Cavalry for the remainder of the match to see out the result and earn their first win under new manager Martin Nash – Wheeldon Jr.’s former assistant.

After opening the season with three disappointing trips to Ontario, Cavalry FC will be relieved to finally have a home fixture circled on their schedule up next. They’ll be at Spruce Meadows to take on defending champs Pacific FC on May 1.

“It’s always tough after the game. We were just in the locker room now, trying to find out what happened out there, and the adrenaline is still going after the game, having just played,” said Cavalry captain Mason Trafford.

“I’m sure there will be positives and negatives to take from that, but it wasn’t a good performance and we’ll need to get back on the training pitch. I think we have eight or nine days until our home opener, so there will be some work to do to get the groove firing on all cylinders before we play Pacific on May 1.”