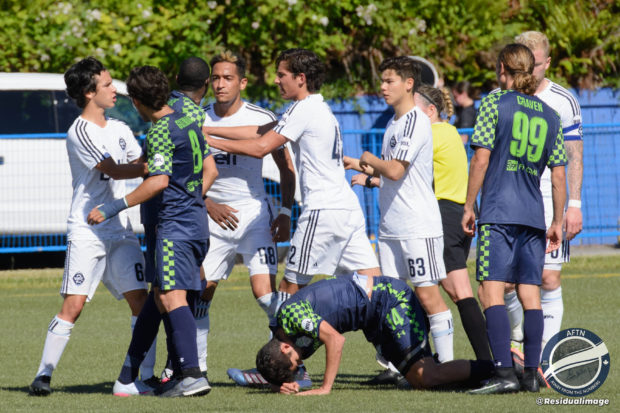 In a match that had a bit of everything on a blistering hot Saturday afternoon at Thunderbird Stadium and 729 fans, WFC2 played out a 2-2 draw with OKC Energy that saw them twice fight back from going a goal behind and end the match with ten men after Dominick Zator’s 77th minute red card.

It was a fairly even start to the match, and surprisingly fast paced considering the conditions. The ‘Caps had the best chance to open the scoring when Kyle Greig’s run set up Tommy Gardner about eight yards out in the 24th minute, but OKC keeper Cody Laurendi produced a great stop to keep out his fierce shot. 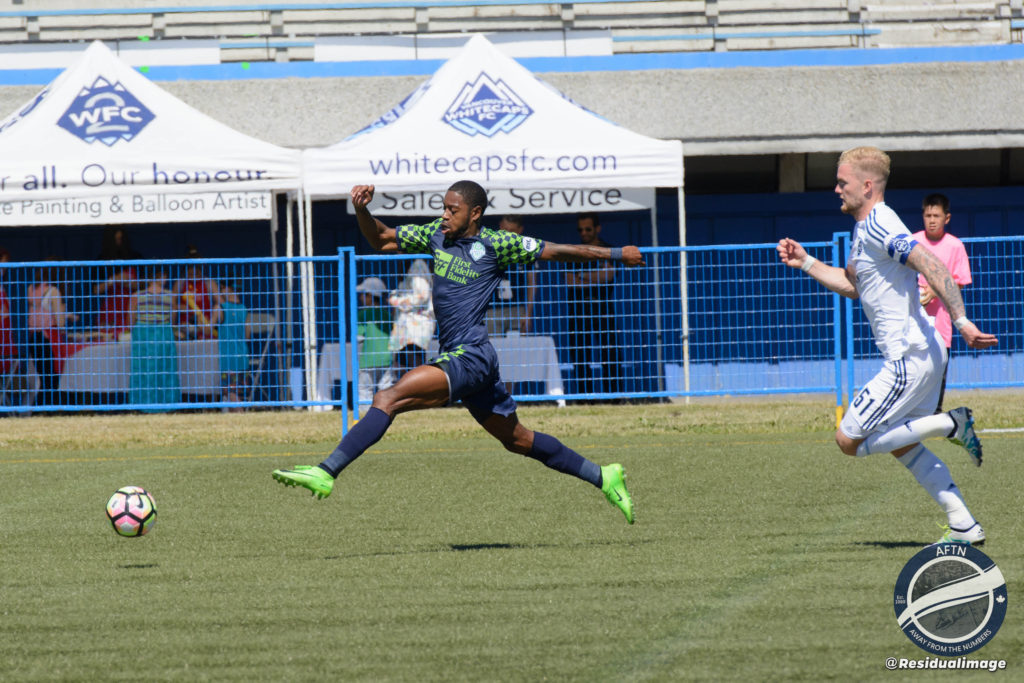 OKC had their best chance of the match so far six minutes later when Hugh Alexander Dixon was sent clear on a long ball, outpacing the chasing Sem de Wit but seeing his attempted lob of Spencer Richey denied first by the ‘Caps keeper’s hand and then cleared by Zator as it headed in towards goal.

But OKC weren’t to be denied and took the lead in the 34th minute when Andy Craven was sent free on the right and delivered a fantastic ball to Juan Pablo Guzmán, who fired home a cracker into the postage stamp corner from just inside the box. 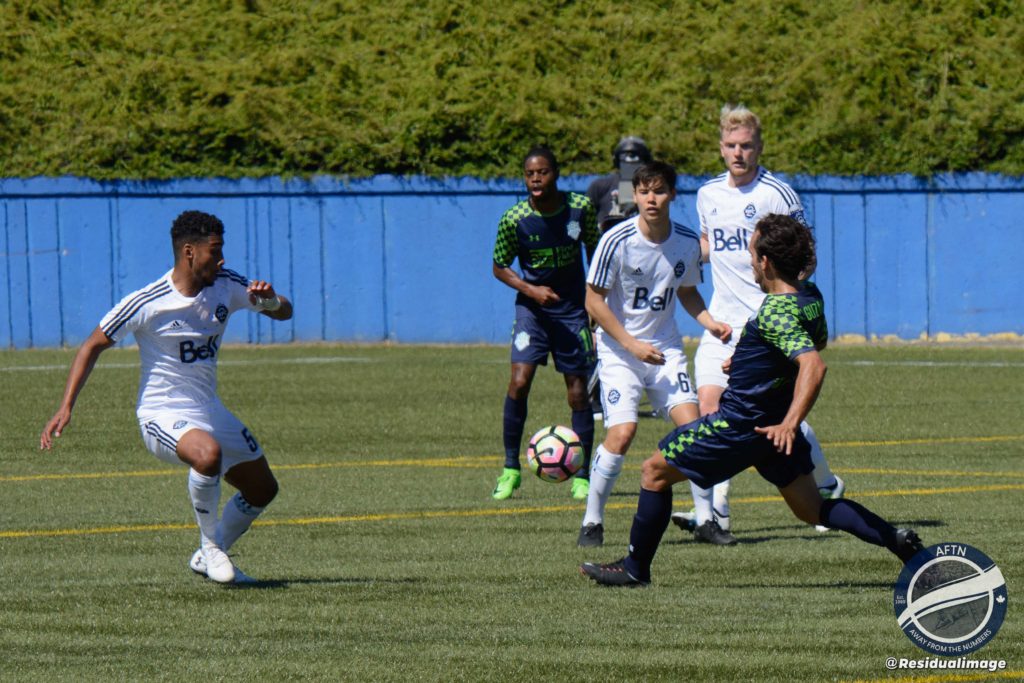 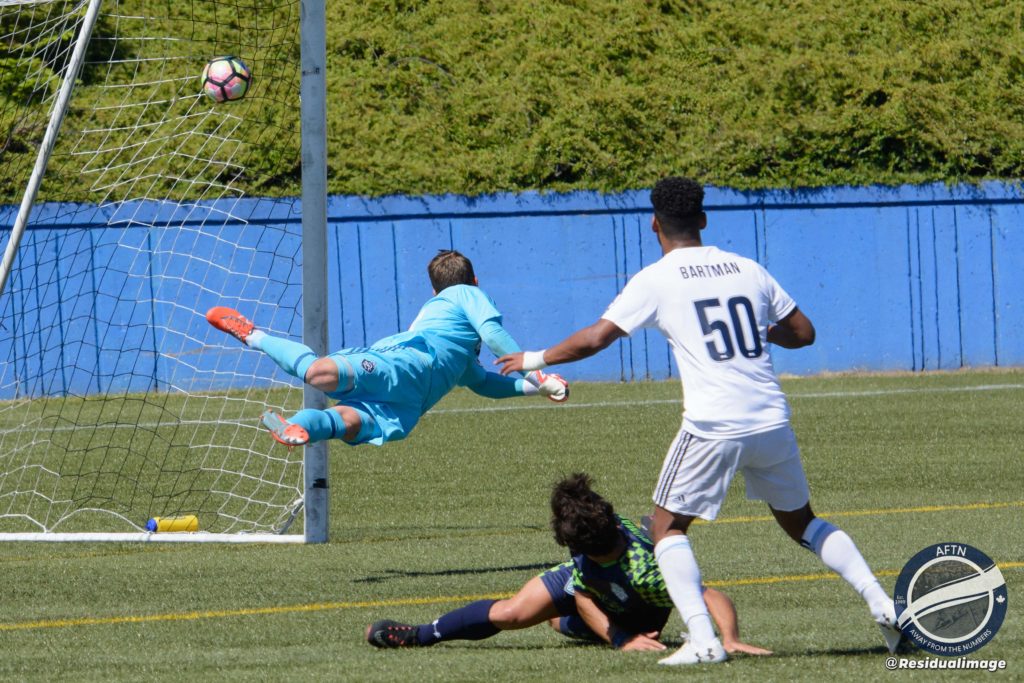 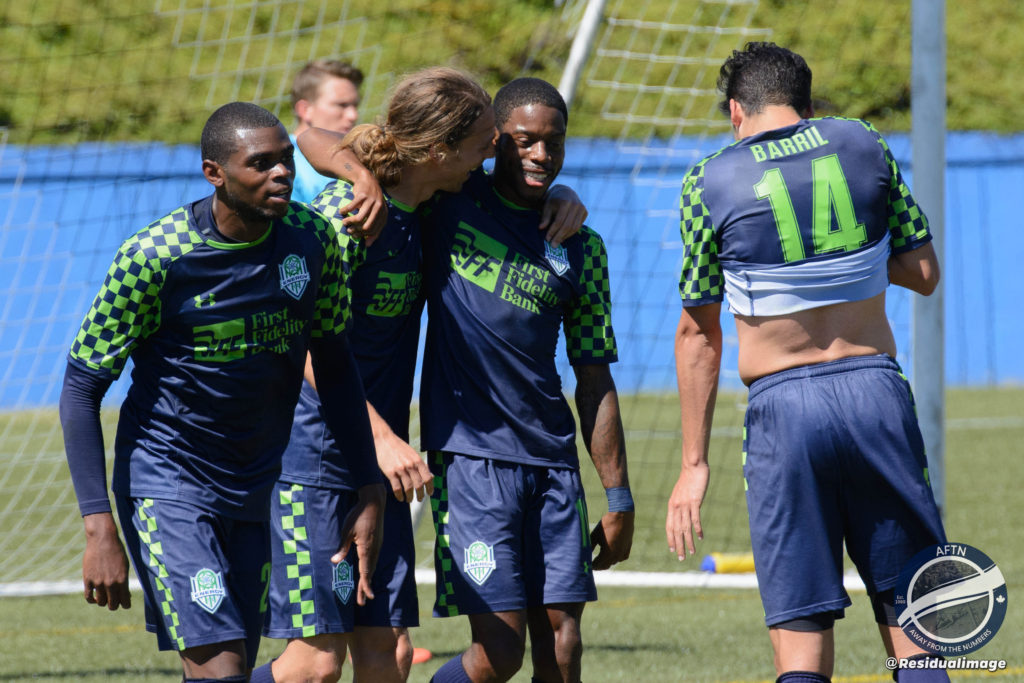 1-0 OKC, and although the ‘Caps had a couple of half chances to tie things up before the break, that’s how things stood at half time.

WFC2 came out fast for the second half looking to get back level and Nazeem Bartman came so close to doing that when Laurendi tipped an Andy Thomas cross into his path, but he couldn’t quite angle his header under the bar as he fell backwards to reach the ball.

Bartman was to get his first professional goal three minutes later though, from another header. David Norman sent in a corner and the OKC fluffed their chance to clear, allowing the South African to head home the loose ball from three yards out. 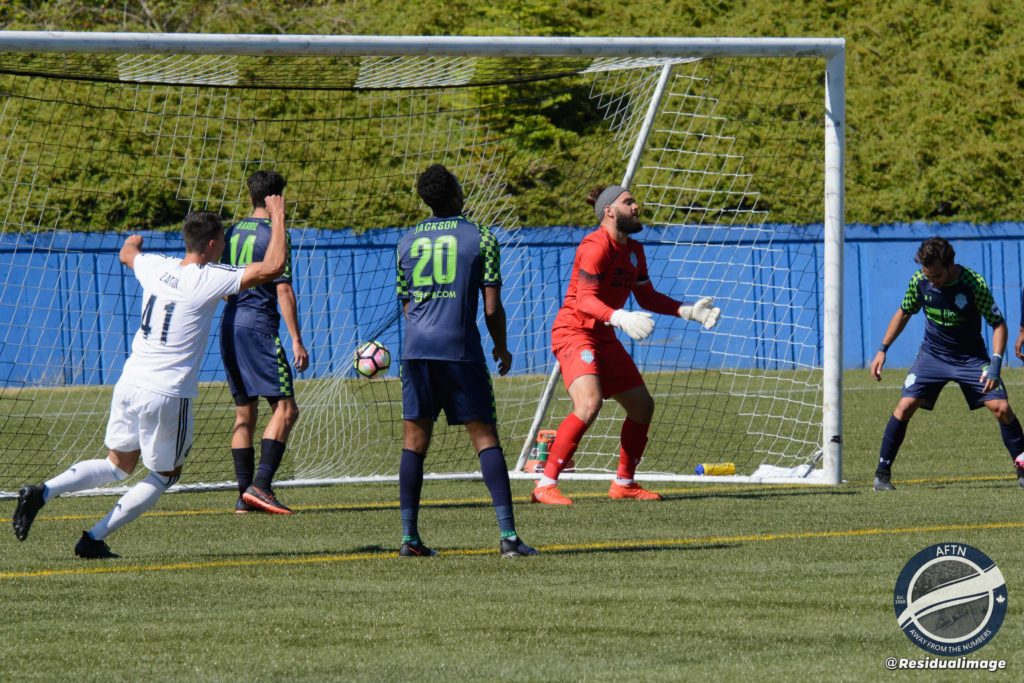 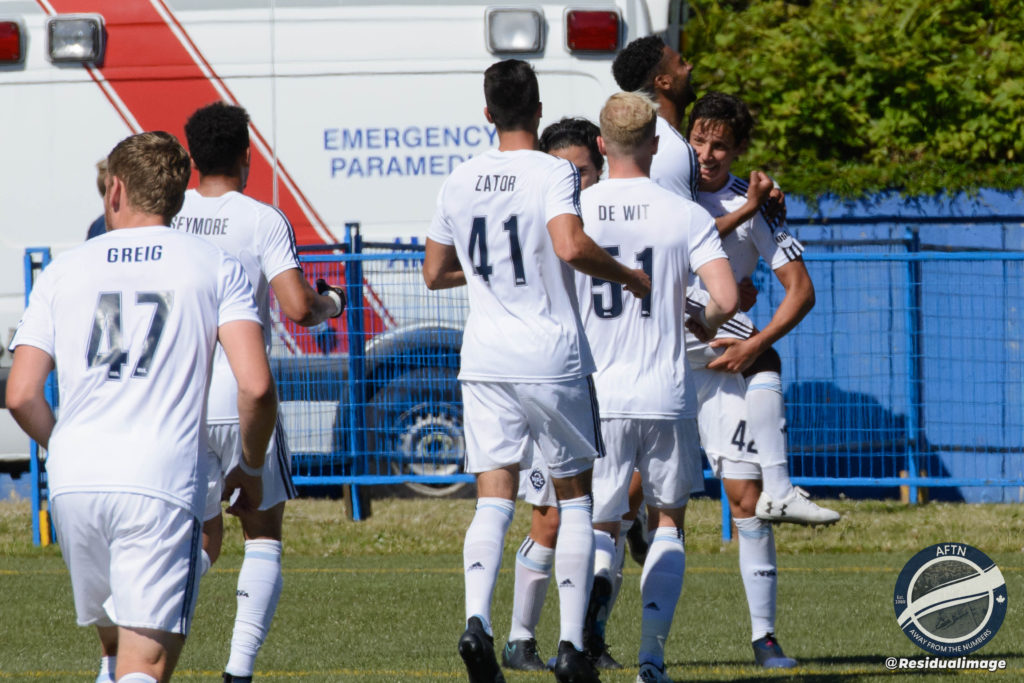 With the way WFC2 were carrying the play you felt they would now go on and win it but they fell behind for a second time four minutes later after Gardner felled Craven in the box.

The Energy player picked himself to bury the penalty past Richey and OKC were back in the lead. 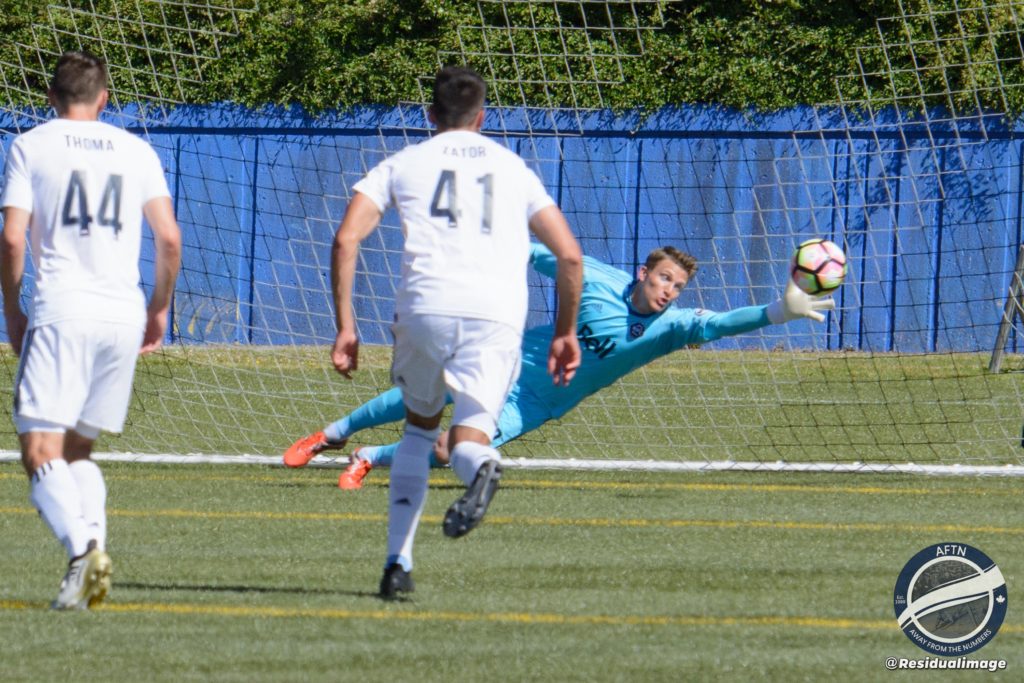 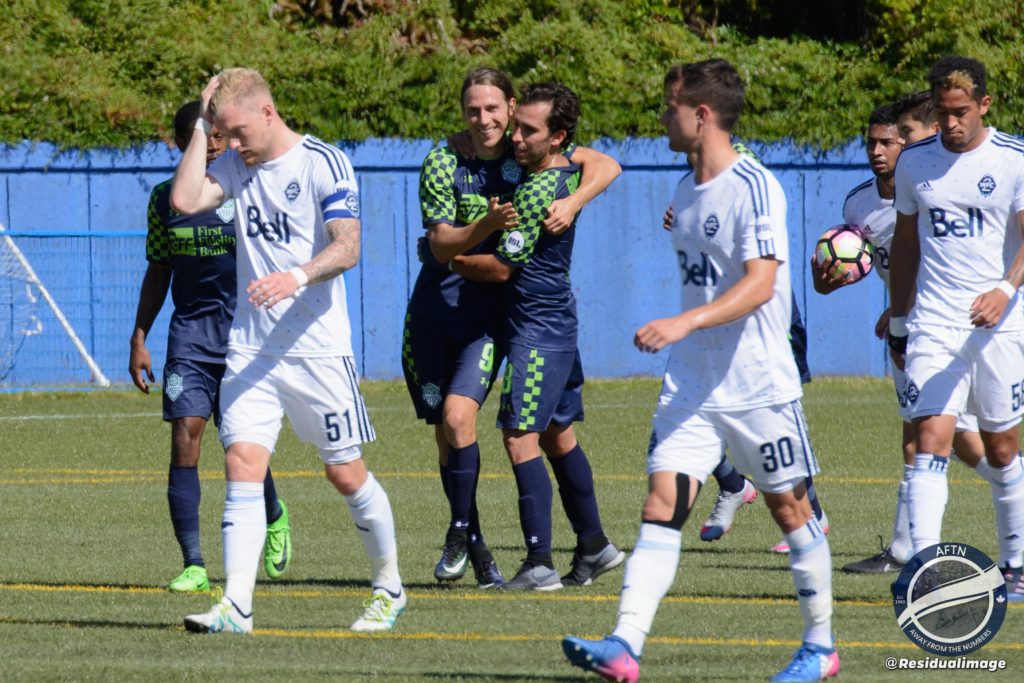 WFC2 immediately made two attacking substitutions to try and get back level once again, bringing on big striker Thomas Sanner and their latest addition, New Zealand U20 striker Myer Bevan, for his debut, fresh from playing with the All Whites at the FIFA U20 World Cup in Korea.

The pair brought an instant spark to the team, creating problems for the OKC defence. And it was Sanner who brought the ‘Caps level once again in the 73rd minute, with a bullet header from a Norman corner. 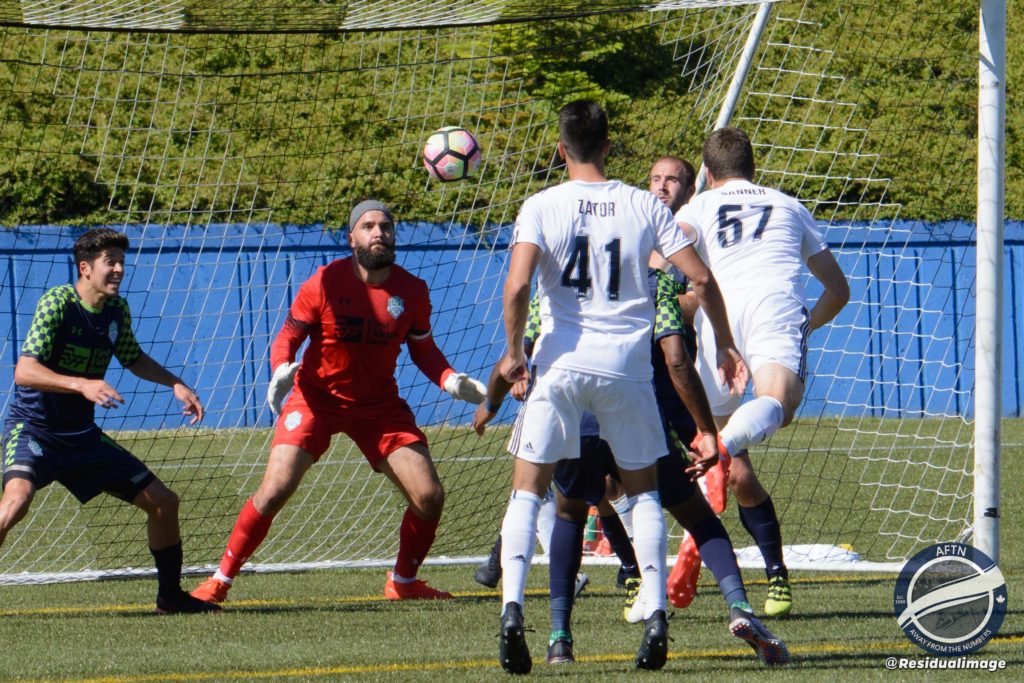 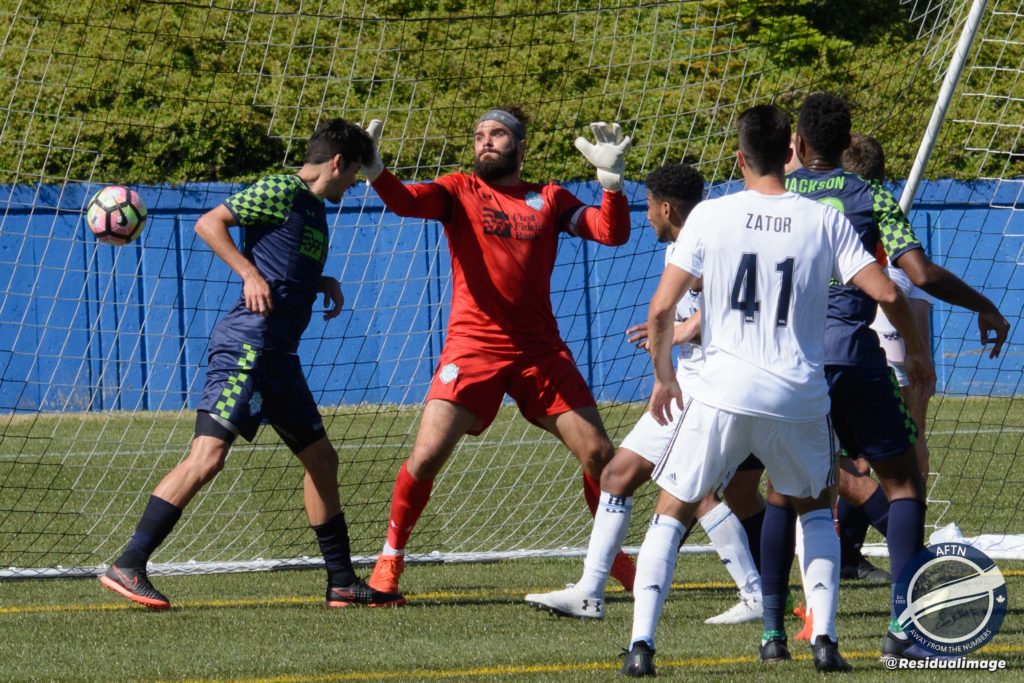 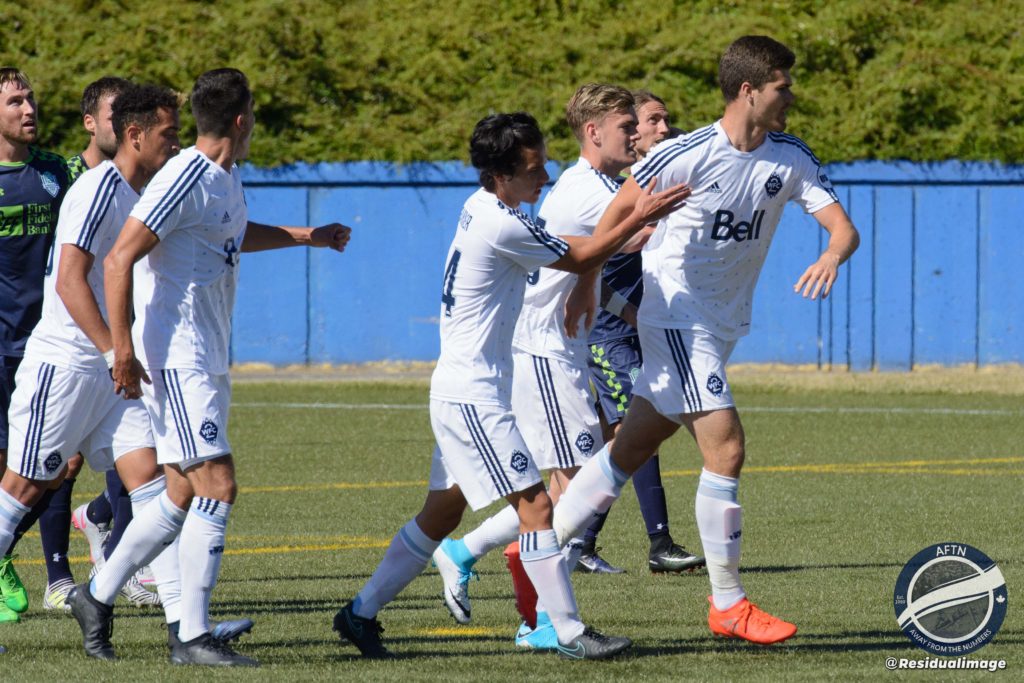 Again you fancied the ‘Caps to now go on and win it, but that feeling once more lasted only four minutes as Zator saw red for a second bookable offence in a clumsy challenge on the pacy Dixon. Definitely a booking, so no complaints there. But it did now leave WFC2 hanging on. 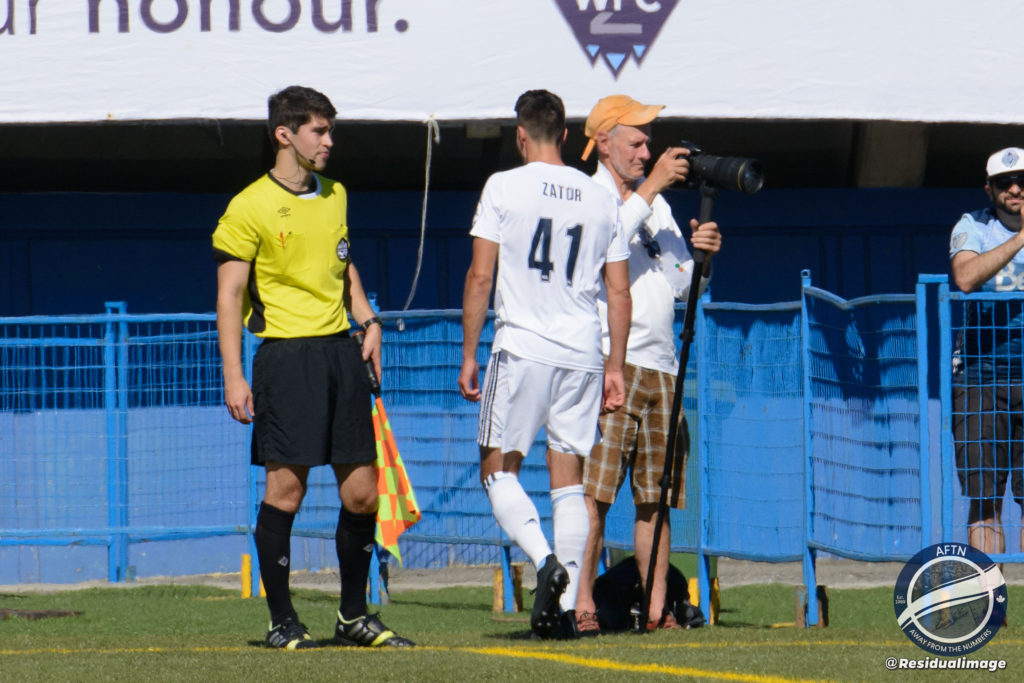 A point apiece then from the kind of game that left WFC2 head coach Rich Fagan with mixed feelings. Happy to hang on till the end for a point with ten men, but equally disappointed that his side hadn’t taken more of their chances and come away with all three.

“Yeah, a little bit of both,” Fagan told AFTN after the match. “We walk away with a point but disappointed that we didn’t convert the chances we created in the first half. Then we pushed for it, but in the end we just fell short.”

A win would have taken WFC2 level on points with OKC (and Rio Grande and Phoenix Rising) for the last playoff spot in the West, but there’s still a long way to go this season and the ‘Caps remain still very much in touch in 12th place.

Next up is a Canada Day spectacular in Langley when Seattle Sounders 2 head to McLeod Athletic park. We’re predicting 15-0 to the good guys in the spirit of the occasion!

AFTN photographer Tom Ewasiuk was there to capture all the action during the game. You can see all of Tom’s photos from the match HERE and in our full Flickr slideshow below: