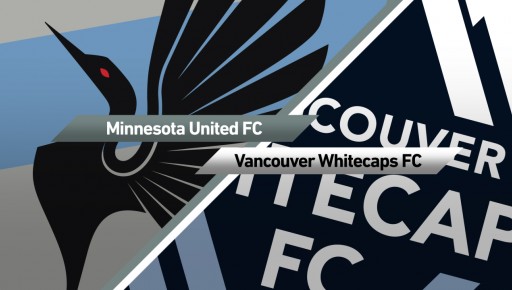 You could make cases for all three of those viewpoints in Vancouver Whitecaps 2-2 draw at Minnesota United on Saturday night.

The ‘Caps were cruising.. Two goals up at half time on the road to the worst defence in MLS. At least that’s what the scoreboard would have led those not watching the game have you believe. The reality was the Whitecaps hardly had a sniff of the ball and scored another two goals off set pieces. I’d take that all day to be fair.

When it works, it’s fantastic and possession is overrated. When it doesn’t, the team is overrun and struggle to produce anything in reply. That was the second half and the home side punished the ‘Caps with two goals of their own.

Then neither team seemed to have the real impetus to seize the win and the match trundled towards it’s conclusion.

Carl Robinson made one change to the starting line up that drew with Dallas last Saturday, bringing Alphonso Davies in for Russell Teibert, in a move that also saw a change of formation from the trusty 4-1-4-1 to a 4-4-2, with Brek Shea moving up top to partner Fredy Montero.

Minnesota were going for back to back wins for the first time in their MLS era and they dominated possession in the first half, with an incredible 77%. But they headed in at the break two goals down.

The ‘Caps had looked dangerous when they did get the ball and they took the lead in the 16th minute from the penalty spot.

Shea pounced on sloppy defensive play and a loose pass by Kevin Venegas in the box and looked set to round Bobby Shuttleworth and tuck it away, but the Loons keeper caught his leg with a sweep and brought the ‘Caps forward down for a clear cut penalty. Up stepped Christian Techera who made up for his miss a couple of weeks ago against DC United and fired Vancouver into the lead.

Jordan Harvey nearly doubled the ‘Caps lead two minutes later when a nice give and go with Montero, on a sweet backheel, saw the left back in on goal but Shuttleworth made himself big to deny him with a great save.

Minnesota came within inches of tying things up in the 22nd minute when a through ball to Kevin Molina in the box was poked just wide of the right post by one of United’s key danger men.

But the ‘Caps ended the half two goals up with a bullet of a header from Tony Tchani off a Techera free kick, and all seemed well in the world. It was Tchani’s first goal as a Whitecaps and stemmed from a great run by, and brutal tackle on, Alphonso Davies to win the free kicks. It was certainly a match where Davies was in the wars.

Obviously we should have known better.

Minnesota games are often goalfests. They’re a team that can’t seem to defend, but seem to be going with the Kevin Keegan approach of that doesn’t matter when you can score lots at the other end. Sometimes it works, sometimes they get hammered.

United were clearly going to come out and go for it in the second half. That should have been no surprise to anyone. With that in mind, it felt the sensible thing to do would be to switch back to the 4-1-4-1 formation that’s served well, and try and close down the middle of the park. Robinson went with the ‘if it ain’t broken, then don’t fix it approach; maintaining the 4-4-2.

It didn’t take long for it then to break.

Minnesota started the second half strongly and got their reward five minutes in when an unmarked Francisco Calvo headed in a Molino cross in from the left to pull United back to within one. The marking from the Whitecaps on the goal was horrendous, with Harvey sucked into the middle and leaving the Costa Rican to have his way as he moved to the back of the six yard box.

Thirteen minutes later, after turning up the pressure, and Minnesota were level when Miguel Ibarra cut inside and played the ball square to Jerome Thiesson and the defender curled a low one past Ousted to tie things up.

More poor marking by the Whitecaps, with Thiesson unchallenged on the edge of the box, and it now looked inevitable that the ‘Caps collapse would be complete with United in the ascendency.

But after working so hard to drag themselves back into the match, Minnesota seemed content that their work was done and it felt like they took the foot off the gas a little. Still controlling possession, but doing nothing threatening with it bar a 20 yard curler from Ibson that crashed off the bar in the 69th minute.

The ‘Caps came close to retaking the lead in the 79th minute when substitute Bernie Ibini rose brilliantly to meet a Harvey cross, but his goalbound header was spectacularly turned away by Shuttleworth.

With the game seemingly heading for a draw, Minnesota nearly nicked it at the death when Molino had two bites at tucking the ball away from a few feet out, but Ousted then Andrew Jacobson denied him both times.

There were some positives for Vancouver, with the ability to convert set piece chances being at the top of those. Jake Nerwinski had a good enough outing at right back, and Techera continued his good form. But Montero had nothing going for him and was subbed off with 17 minutes remaining, replaced by a lively Ibini, who certainly brings something a little different to the ‘Caps attack.

Possession stats were also a concern, Vancouver finished the match with 26.8%. It’s hard to suddenly switch into control the game mode when you’re hardly getting the ball.

Still, all said and done, it was a point on the road for the Whitecaps. One that keeps them three ahead of Minnesota, but sees them fall out of the promotion places. A lot still left to play for, the Whitecaps don’t reach the halfway point of their season for another two matches, but they’ll have to be much better in all aspects to get themselves firmly in the postseason mix.

With a tough match coming up next week at Chicago Fire, who are lighting it up on the back of a nine game unbeaten run, Vancouver will certainly have their work cut out for them.

On if there’s a sense of disappointment with the result…

It’s probably a fair result based upon us being two-nil. Credit to Minnesota, they reacted very well at halftime and we knew that would be the case. But we’re disappointed. We need to manage the game better. Two mistakes cost us in the 50-minute period. We gathered ourselves then. We could have won it, maybe could have lost it. So, overall, we’ll take it.

On the response from his team in the final 30 minutes…

It was great. It was really great, but two individual errors. At this level of football, you can’t make individual errors. If you make them and you concede goals it gives the other team a momentum, that’s what happened. But great response, good character. We could have won it, but as I said before, we could have lost it as well.

On what he makes of Techera’s play…

I thought Cristian [Techera] and Alphonso [Davies] were excellent today. I think Cristian and Alphonso caused a lot of problems. They were our biggest threats on the pitch. Both had very, very solid games.

On whether the game could have gone either way, noting that both goalkeepers had to make a save at the end…

Bobby [Shuttleworth] and David [Ousted] both came out with big saves at the end. Like I said, could have won it, could have lost it. That’s what goalkeepers are paid to do: keep the ball out of the net. We conceded two.

Every road match is tough wherever you go. It’s hard to win on the road, it’s hard to put points up on the road. We’re disappointed in there (the locker room), and it shows how far we’ve come away from home. We’re disappointed. We’ll regather ourselves, we’ll try to get a few more fit, able bodies training for next week, and we’ll prepare for a difficult match in Chicago.

On getting only one point…

Definitely disappointing. Up two-nil at half and felt that we put ourselves in a good position. But they came strong in the second half and a couple of mistakes from our point and it was 2-2. Then it was kind of a battle of who was gonna get the third.

On his teammate’s reaction after the tying goal from MNUFC…

Really well. I thought we collected ourselves again and got on the ball al little bit more. We had a good chance, but kudos to Bobby for an impressive save.

On his big save towards the end of the second half…

Like I said it was kind of a race for who’s gonna get that third. They got into some good positions and [Kevin] Molino got into a very dangerous position and luckily, I got in the way of that.

On the importance of picking points up on the road…

I think we’ve done well. I think today’s disappointing. I think we could have definitely of gotten the three points, but a point on the road is worth it and we’ll hopefully continue that road form.

On the upcoming away game against Chicago…

We’ll use the week to assess them. They have played really well, especially at home, but I believe we’ve got the quality away from home to go and win.

Thoughts on the draw…

On whether team needs to be freshened up…

We can’t wait until halftime and have me lose my voice to get the reaction that we had. If we do, it’s not going to be enough. We’ll have to change things. We’re down to bare bones at this time. We need to bring some reinforcements in.