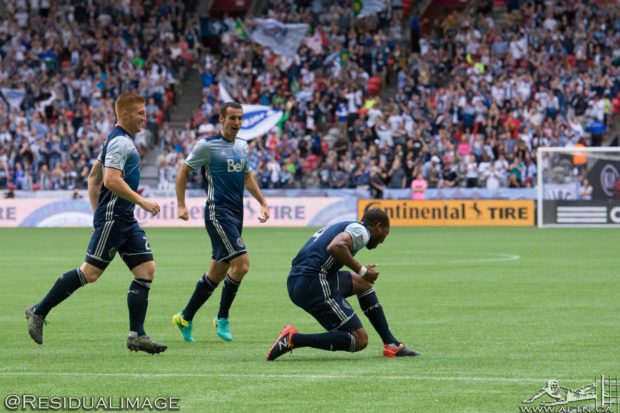 ”Winning is great, sure, but if you are really going to do something in life, the secret is learning how to lose. Nobody goes undefeated all the time. If you can pick up after a crushing defeat, and go on to win again, you are going to be a champion someday.”- Wilma Rudolph

Yeah I know that the Vancouver Whitecaps didn’t technically lose the game and still earned a point with a draw, but after so many of these late game flops week after week, they sure are starting to feel more like losses of two points given up instead of one point earned.

This team is an enigma wrapped in a riddle. Last season they were one of the best defensive teams in MLS. This season they are the worst team in MLS and it seems that they have late game collapses on far too many occasions. It is costing the team valuable points, ones that they might need just to make the playoffs at the end of the season.

With the signings of David Edgar and Marcel De Jong seemingly set to be announced in the upcoming days, I think supporters might be tricked into thinking all the problems will be answered with these two signings. This team has so many issues that signing two Canadian defenders will not even come close to fixing this team.

With only four days until the next game against Real Salt Lake, let’s take a look at this shit show and take one last look at “ The Good, The Average and The Bad: Late Game Bullshit Edition”…

At Least They Earned A Point

Woo hoo, they got a draw and didn’t lose the game outright with their lack of defensive quality in injury time. Even though it was heartbreaking to lose the win, it could have been a lot worse. All these points they are leaving on the pitch may be what leaves them out of the playoffs this season. It comes down to as little as one to two points for some teams at the end of the season.

It’s been a bad few weeks with losing the Canadian Championship and two critical league points with injury time goals against. It won’t be an overnight fix but even if they can be 30% better in the second half of the season it should bode well for this team.

On to the next one….

Other than penalty kicks to pad his stats, Morales has been average at best this season. No matter if he is lining up next to Matias Laba as a defensive midfielder or playing that central attacking midfielder role, he has been average.

His lack of quality this season is leaving a lot of supporters questioning why Nicolas Mezquida isn’t starting for this team, and it may come down to salary. Carl Robinson has always said he will play the best player on the pitch no matter of salary. I don’t believe that to be true this season. Mezquida should be starting over Morales, Blas Perez should have started weekly over the outgoing Octavio Rivero and, at times, Kendall Waston should be sitting his ass on the bench.

With the second half of the season coming up, it is time for Morales to start playing like a Designated Player and earning his salary for this team. No need to pussy foot around these players as they are professionals. They get paid pretty well to play the game of football and need to be criticized when they aren’t living up to their potential.

We have seen this ending time and time again. The Whitecaps, with a one goal lead, five minutes of injury time added and giving up a last ditch goal to lose the game or settle for a draw instead of a win. I don’t know about you but it isn’t getting any easier seeing it happen week after week.

It was a nightmare game for Jordan Harvey and Jordan Smith, no easier way to say it.

Smith was beaten down the wing and into the middle of the pitch almost at will this game. He was caught flat footed and pinching too far up the pitch numerous times. With Fraser Aird out injured, and no other options at right back with Tim Parker, needed at center back, I don’t see him as a long term Whitecap moving forward and have a feeling he may be moved at the end of the summer transfer window.

Harvey has at times been the best defender this season for this team. With the crap defensive record, that isn’t saying much, but someone has to be the best of the worst I suppose. He was caught too far into the box on the game tying goal and needed to be more vocal with Parker about marking that late in the game.

Lets hope Edgar and De Jong make immediate defensive impacts and somehow the rest of the team can figure out the offensive problems for this team.