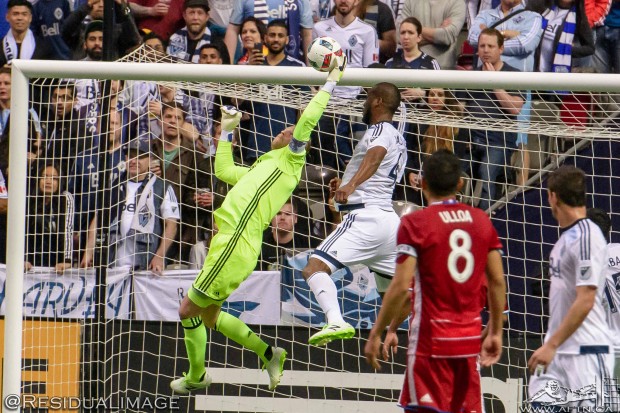 It’s a tale we haven’t seen in a while but a familiar story none the less.

Sure the supporters of the team will take a 3-0 win against the top team in MLS, but there is still a lot of work ahead of them to right the wrongs this team has experienced the past three games.

So tonight let’s raise our pints, sing our songs and enjoy the taste of victory because on Wednesday, the MLS regular season war continues.

Mr. Ousted Does It Again

Most goalkeepers will take quantity of saves over quality of saves. This season Ousted has stepped up his game and is the top of MLS with both the quantity and quality of his saves. Coming into the game with a MLS leading 34 saves, he added four more quality saves to steal the victory for the Whitecaps. It felt like many more.

After the tip over from Maxi Urruti’s looping effort and the point blank range save off Michael Barrios to keep FC Dallas off the board, the Whitecaps really stepped up their game and attacked the Dallas defenders in waves. Sometimes all it takes is a big save and a fluky goal to get the ball rolling.

So thank you Mr. Ousted for Saturday night, but on to the next one.

Carl Robinson is hitching his wagon to starting Rivero this season. As we have discussed week in and week out on AFTN, yes he does so much right while he is on the pitch. But a striker’s job is too put the ball in the back of the net and change games.

How much longer does Rivero get the start over the highest scoring AFTN writer in MLS history Blas Perez?!

Perez came on the pitch and made an immediate impact setting up the Kekuta Manneh goal. That is what Rivero needs to do to continue starting for this team. Let’s stop settling for average from Rivero and demand a better quality moving forward.

Where Is This Much Quality Every Week?

Let’s hope this win propels the team in the right direction and they can build on this. They finally have a goal from open play, got that dirty own goal that sometimes can spark a struggling team, and will have so many strong parts of this game to continue to improve on.

They may have won the battle on Saturday night, but they still have a war in front of them.