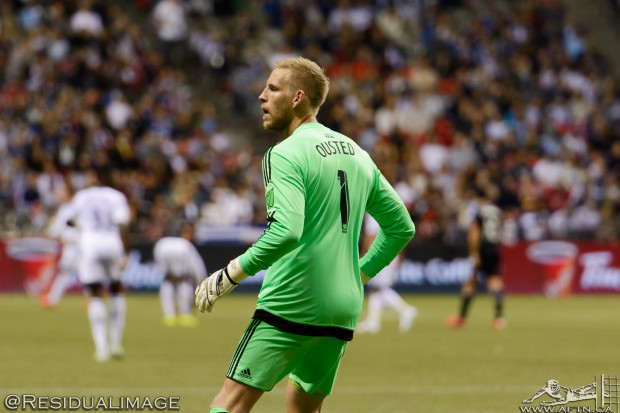 It’s some turnaround. Vancouver Whitecaps’ form away from home is making up for the points they’re dropping at home. DC United’s 2-1 win over the ‘Caps on Saturday night makes it eight points dropped at home from their five matches at BC Place this season.

There were some highs, some lows and some dreadful stuff on display. Aaron looks at “The Good, The Average and The Bad” from the defeat.

Was really the only bright spot for the whole ninety 90 of the game. Made some big saves to keep the Whitecaps in the game and gave them a chance at the end of the game to maybe tie the match up. Had no chance on the first goal due to the poor marking by Sam Adekugbe on the cross into the box. The defenders in front of him cannot let players get into the box and into the air that easy on crosses. The second goal was made possible by a Steven Beitashour diving tackle that threw the defenders out of whack. No keeper in MLS would have likely stopped that goal.

Time and time again Ousted has bailed out his defenders in front of him this season, he has stepped up and made huge saves late in games to make sure the team leaves the pitch with the whole three points. It is time for the team in front of Ousted to step up, stop getting silly yellow cards and make it so Ousted doesn’t have to stand on his head for the Whitecaps to earn a win.

Yes, he got his first goal of the season and it was a thing of beauty, but why take a yellow card for taking your shirt off, especially in the 2nd minute? He has done this last season and knew the consequences of his actions. I can see maybe after the 80th minute when there is a considerably less chance of picking up a second yellow. He is lucky his stupid action didn’t come back to bite him in the rear.

The biggest problem I saw with Morales was his delivery decision was poor on numerous occasions. Made way too many passes where he had no chance even with his great ability to get it to his teammate. He should have taken the easy passes numerous times instead of forcing it down the middle of the pitch. It will be interesting to see what he will be able to do with passes when the new longer turf is installed in BC Place. Will the ball be able to make the same curves on them as they do now? Will he still be able to use the speed of the ball on the turf as he does now?

A MLS referee batting 1.000% this season. Three games this season, three red cards shown by him in them. Gantar has a career record of issuing a red card in 36.8% of his games before last night. As TSN’s Jason DeVos pointed out during the San Jose game a few weeks ago, “the players no longer know what a yellow card is anymore”. It changes from game to game and referee to referee.

I will give Gantar the Morales yellow card. Every player knows that he will be carded for it. That one is on Morales, he should know better. The yellow of Sam Adekugbe was where it gets a little WTF. The only reason that Adekugbe got the yellow was because of the whining and complaining by the DC player well after the fact. Also why didn’t Perry Kitchen get a yellow for kicking Adekugbe while he was on the ground? If that call was proper and Kitchen got a yellow it makes a huge difference when Kitchen actually got a yellow in the 84th minute. The whole last six minutes plus stoppage time would be a completely different situation.

Matias Laba’s first yellow was a bad call also. The ball looks to make contact with his midsection. He stepped up and stopped the DC attack with a good play. Laba’s second yellow in the 42nd minute was all on Laba. There was no need to make contact on the feet of the player with the ball.

An interesting fact about the first half: Whitecaps had 7 fouls, three yellow cards and one red card, DC had 9 fouls, no yellow and no red cards. A fair reflection? We need more analysis on that one.

Of course Gantar gave two yellow cards to DC players after the 84th minute so it will look even on the score sheet. It was too little too late.