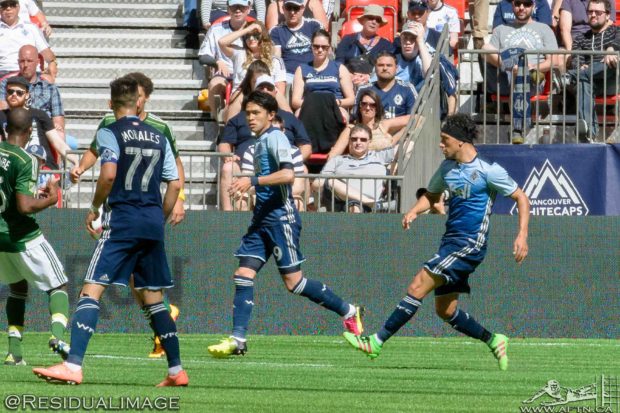 It was a story we have seen at BC Place time and time again but thanks to the Portland Timbers, Vancouver Whitecaps were able to rewrite the script in the second half. This was the first Whitecaps come from behind win since September 27th 2014 against Real Salt Lake. It feels even longer.

Carl Robinson was quick to point out in the post game press conference that this was the most complete game from a starting XI they have had this season. From the complete game he got from Christian Bolaños, who was that spark who got his teammates involved in the attack after they went down a goal in the first half, to the emergence of Masato Kudo, who opened his MLS goal scoring account.

With a busy week of three games in eight days, this will be a good chance for players to get opportunities to show the coaching staff that game in and game out they can contribute to this team.

With another Cascadia win under their belts this season, let’s take a look at “The Good, The Average and The Bad: Portland Goes Timber Edition”…

It was probably the most complete game from a Whitecaps player this season. He scored a lucky goal, but no matter how you score it still counts the same. Sometimes you have to be good to be lucky. With goals being a problem for this team to start the season, Bolaños has been able to score three goals in the past three games.

Bolaños along with Nicolas Mezquida were the spark that turned the match in the Whitecaps’ favour. In the opening ten minutes of the game we set up Mezquida for two great chances that made Gleeson have to make big saves.

After the Whitecaps went down a goal, it was Bolaños who was the player who really stepped up and the player that everything went through to continue getting chances. He was quick to get his teammates involved in the attack and the first to hustle back when there was a turnover in the midfield.

It was great he could score his first MLS goal and add an assist on the Bolaños goal. It was a goal to the inside post that not many of his teammates, including Octavio Rivero, can score when they have such chances. So far this season Kudo hasn’t been able to find his role on this team. He hasn’t been able to settle in to the best spot that will make him excel this season. After struggling to start the season after an undisclosed injury in the preseason, he looked a step behind in his minutes so far this year.

One part of his game I would like to see him improve on is not shying away from the physical play in the box on corners and crosses. It just wasn’t this game when he was lining up against Nat Borchers, it has been a problem throughout this season for him.

When he was brought in to this team Robinson said he was a player that likes to get into the box and get his head on crosses. It was definitely easier in his last league than it has been for him in MLS. I don’t think he realized how physical the play in the MLS was and it might have been a big shock to him after playing his first few games in the league.

Not Going A Step Back In The Upcoming Games

Now there wasn’t anything from this game that was bad per se. The problem I can see on the horizon is them taking Chicago lightly this coming Wednesday. With a big game next weekend against Toronto FC could they be looking past the Fire.

The Whitecaps have had problems in the past against struggling teams. Look at Chivas the first few years in the league, how many times did they drop points to them that cost them playoffs of higher seeds in the playoffs?

Time for this team to maintain the level of play they showed this game and settle on a starting XI they can move forward with.