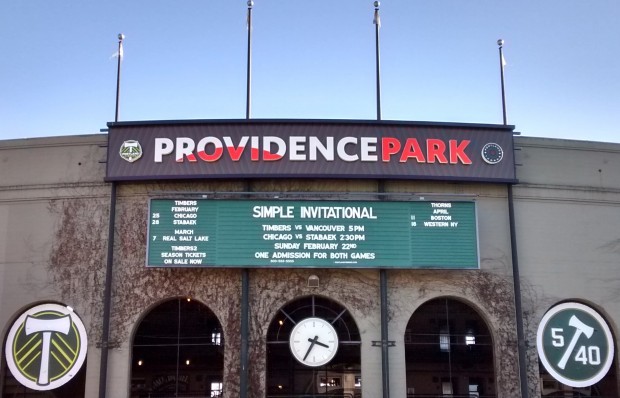 Vancouver Whitecaps travelled down the I5 to Portland and opened the Simple Invitational with a hard fought and chippy 1-0 victory over the host Timbers. Pa Modou Kah put the nail in the coffin with a nice header from a Mauro Rosales cross to give the Whitecaps the win and continue where they left off in winning last year’s tournament.

Let’s take a look at The Good, The Average and The Bad: Simple Opponent In Simple Portland Edition….

We saw a clinic in the first half of the game. He was on point with all his passes up the middle, over the top and through to the wing passes for Kekuta Manneh, Octavio Rivero and Mauro Rosales. He was able to hit them in full sprint and if it wasn’t for the Portland keeper being so active outside his defensive box the Whitecaps would of had two or three more great scoring chances.

It looks like the three months off this offseason has Morales healthy, rested and refreshed.

Rivero had some great runs this game, we saw the same thing down in Tucson. But he did lack calmness and finish in the 18 yard box. He was trying to make that one extra move that gave the Timber defenders a chance to knock the ball away from him.

On the bright side he did play well with Morales and looks like once they are in sync they will be a power pair in MLS.

We all saw that coming. Kendall Waston and Pa Modou Kah both earned a yellow card in this game. This will be a big story this season. There will be suspensions, which means Diego Rodriguez, Tim Parker and Christian Dean will likely all be getting MLS minutes.

Waston was lucky he didn’t pick up a second yellow a few different times. He played at his physical level that you love to see from him. You have to take the missed games due to suspension if you want him to play at this level. He was just physical enough where Portland forwards where concerned to go up against him in the box.

Kah has a history of yellow cards and it won’t change now that he is in a Whitecaps kit. Both he and Waston have to be smart when they play with each other to make sure they don’t hurt the team by both of them being reckless. He did show some great defensive ability in the box and stepped up big with the game winning goal.