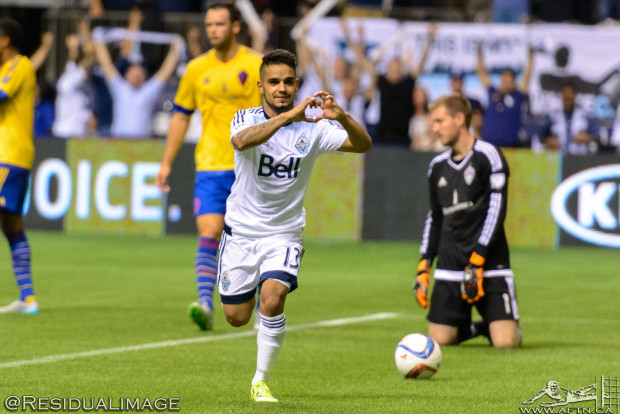 The t’s have finally been crossed and the i’s dotted and the end result is that AFTN’s outfield Player of the Year, Cristian Techera, will be a Whitecap once again this season and for a few more to come.

The felling within the club is that the best is still to come from the man they call “The Bug”.

Aaron Campbell looks at “The Good, The Average and The Bad” from Techera’s re-signing.

They Completed The Transfer

He is not on loan, he is a fully fledged member of Vancouver Whitecaps now. With the top secret MLS rules we will never really know if there is a sell on fee for River Plate. Given his young age and if he can excel the next three or four years they may be able to turn a good profit on Techera or, ideally, a highly contributing Whitecap for many years to come.

Also now all the supporters that were talking about the lack of moves by Carl Robinson and company in December can now take a deep breath, calm down and look forward to First Kick moving forward.

Techera is just a piece in a great big puzzle that Robinson can see in his head. There will be many more moves before that First Kick this season. Where does Gershon Koffie go, if anywhere? Who wants Darren Mattocks? Does Erik Hurtado wear the Whitecaps kit again?

There will be more players brought into the team before the season starts, but Techera may be that one piece you need to find to complete the puzzle and Robinson has already found it early.

I can just picture Don Garber standing in front of all the owners having his Oprah moment, before adding a cautionary “but spend it wisely”.

I have already heard people complaining that this isn’t how the Whitecaps should be spending their TAM. It’s their TAM and they can spend it however they want! Sure Techera may not be a typical DP like other teams have brought in, but his salary this season is a reward for his actions on the field last season.

With TAM being such a new addition to the MLS arsenal package, no one knows how to make the most out of it. Getting a young exciting player, who has already shown he can excel in MLS games, is a damn good start for their TAM experience.

Too Many Cooks In The Kitchen?

With the reports yesterday that the Whitecaps have also signed Costa Rican veteran Christian Bolaños, could there be too many forwards and not enough minutes to keep them all happy?

That is the main reason why Darren Mattocks wants out of Vancouver. He wants to find a place to play that will give him quality first team minutes. And for whatever you might think of his talents on the pitch, that is the correct decision for the young player.

With the locker room that Robinson is constructing, it might not be a problem right away, but depending on how the season goes it could be a problem in the future.

Everyone is happy when the team wins, but if this team struggles and morale lowers, it could be a recipe for disaster.