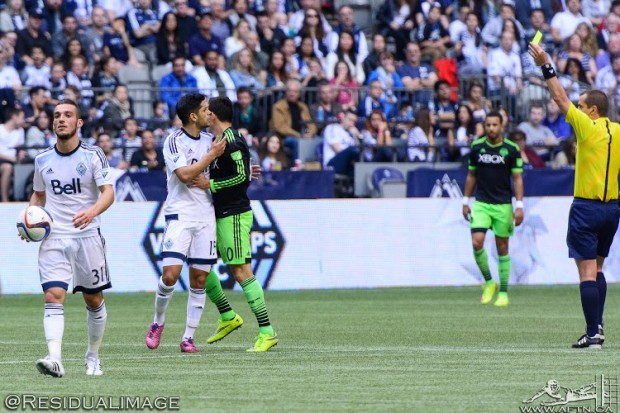 Home defeats are hard to take. Home defeats in a Cascadian derby where you are no so much outplayed, but outthought, even more so.

Seattle came to BC Place and played a near perfect road game. They left with a 2-0 win and three points.

There wasn’t a lot of positives to take from the game from a Vancouver standpoint, but Aaron Campbell looks over “The Good, The Average and The Bad”.

There weren’t many bright spots for Vancouver Whitecaps in this game. No player stepped up and excelled in their form.

That being said, ding dong the carpet turf is gone. The turf has received numerous complaints from many players in the league and who knows how many injuries it may have contributed towards?

Last season we saw Pedro Morales struggle on several occasions due to a sore back from running on the turf. Time and time again we have seen players slip and fall after the turf has been watered down at halftime. Yesterday players were slipping in the first half.

Game in and game out Carl Robinson knows he can count on Matias Laba. He knows that Laba will win every challenge and shut down all the opposing players in the middle of the pitch.

This game was different, after picking up a silly yellow card he seemed to take his foot off the pedal. He was hesitant to pick up a second yellow like he did a few weeks ago. He didn’t step up and challenge the Seattle players and because of that the Sounders players where able to take their time and play great through balls on both goals.

Sure you can blame Pa Modou Kah and Kendall Waston, primarily on both goals for being flat footed, chasing and trying to call for the offside. But if Laba had been more physical in the midfield those passes would not have been able to be made.

Worst sub in Whitecaps’ MLS history? Didn’t give any effort once he got on the pitch. Such a waste of a sub, when you are down and need offense to get back into the game you should be able to call on a speedster forward.

He wasn’t able to get involved in the attack at all. When he did make a run and the ball got away he immediately stopped and started walking. It was the Mattocks of last season. When if it didn’t go his way he stopped and put his hands on his head.

Maybe a run in USL would make it known to Mattocks that he has to do better if he wants more MLS minutes.