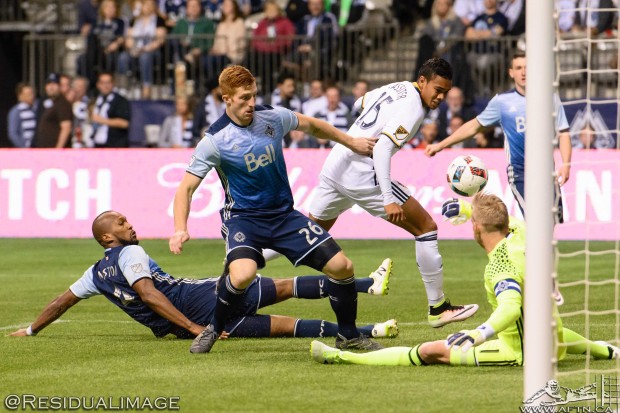 Well that game didn’t go as planned. All players were back from international team duty, Nicolas Mezquida was rip raring to go after buzzing all week in training and, knock on wood, injuries have been at a minimum since the season started.

In the 19th minute we saw Pedro Morales go down with a left hip strain. In the 28th minute it was a straight, weak, red card to Matias Laba. Then to add insult to injury, Kekuta Manneh came off in the 43rd minute after apparently reaggravating his ankle.

Yet even with all those negatives the Whitecaps still managed to play a great overall game and earn a hard fought point against the star studded LA Galaxy.

There is still a lot work to do for the ‘Caps moving forward, but hard earned points like they got from this game will only build character within this team.

Time to take a look at “The Good, The Average and The Bad: Whitecaps Draw The Galaxy Goons Edition”…

Two seasons ago this game would have been a loss for the Whitecaps. But the team that Carl Robinson has built over the past two years have shown that they can gut out draws instead of losses, and wins instead of draws, on numerous occasions. Being down to ten men, with two key players injured in the first half, they could have just packed it in, taken a loss and moved on.

They even had several chances to win this game and steal the three points. A long range missile from Andrew Jacobson at the end of the first half, that Brian Rowe stopped with a great diving save, was the Whitecaps best chance, but they kept pressing and had a few others along the way.

This hard fought draw will show the players on this team that even with the odds stacked against them, they are good enough to always be in a game and earn results.

Another game and no goals from Octavio Rivero.

Yes, he does all the other aspects of his game correct, but in a salary cap league, goals matter. That being said, with being a man down this game for over an hour, there is not much more he could have done with what was presented to him on the pitch.

The lone man on an island routine seems to be wearing thin fast with supporters. A manager’s job is to put the players on the pitch into the best possible position to succeed. Is Robinson doing that with Rivero so far this season?

Now I understand that Perez was coming off a long week of travel with the Panamanian call up last week, and at his age he needs more rest than a younger player, but putting Kekuta Manneh up front with Rivero in the 4-4-2 formation did not work well. Nothing against Manneh, but his playing style does not compliment Rivero’s style side by side on the pitch in my opinion.

How much longer will the masses settle for average from a DP striker not scoring and the manager not using him in a formation that he can succeed in?

Where do we start with this one? Do we really want to open up this bag of worms? Of course!

When the play first happened, and referee Jair Marrufo walked towards the play, you can clearly see him going into his front pocket for a yellow card. After he is crowded by LA Galaxy players, who Kendall Waston is trying to shield the referee from, he changes his mind and reaches into his back pocket for the red card.

So much for MLS’ mass confrontation rule. Will we see a Galaxy fine for this?

Players should not have any say on if a player is to receive a yellow card or a red card or if they should receive a card instead of a warning.

We all know the MLS has told the PRO (the “Professional” Referees Organization) to crack down on cleat up challenges, but this is getting ridiculous. The referees are making decision while being scared. They are not making the call in the MLS’ eyes.

The MLS has stated they want to be a top football league in the world by 2020, with the quality of refereeing that it currently has, that will never happen. You can’t have the players of the league not knowing what is and what is not a foul.

A side note on the Laba red card. If you watch the replay closely, while referee Jair Marrufo is reaching for the red card you can clearly see Waston grabbing his forearm to stop him for doing so. Will Waston face any fine or even a suspension for making contact with the referee? The rules may not always be clear on all parts of the game but making contact with a referee is a no no.