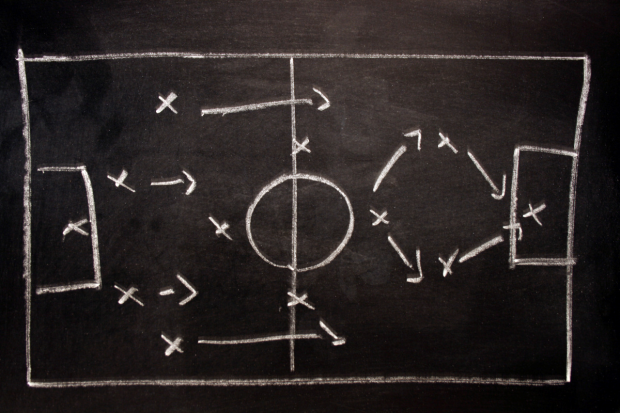 We’re adding a number of new writers to AFTN for the season ahead and we’ll be unveiling them all over the next few weeks. Joe Deasy from ‘The View From 202’ blog is the first of them and here’s his first piece for us. You can read Joe’s (and all of our writer’s) bio on our AFTN team page.]

If there is one thing we love here at AFTN, it is an abstract and philosophical debate on formations and tactics. We have all, at some point, dipped our toes in the wonderful world of Football Manager. One of us who will remain unnamed even has an unhealthy fascination with attacking wing backs. In the case of Vancouver Whitecaps however, the fact that this is a real-life club with real-life consequences has to be taken into account.

Last season, the 4-2-3-1 formation was the flavour of the year, with sprinkles of 4-3-3 and even a 4-4-2 diamond in one of the early games. I thought the 4-2-3-1 was great; it provided lots of width for our speedy wingers, but also compacted the opposition enough that we could press high and get the full backs involved.

The largely superior technique of players like Cristian Techera, Octavio Rivero and Pedro Morales made the possession game possible, while the menace of Matias Laba and Kendall Waston, balanced by the consistency of Jordan Harvey, Tim Parker and David Ousted provided a fantastic defensive bedrock.

But a new season approaches and with it comes a fresh batch of players who will pull on the blue and white jerseys in 2016. Does the fact that these don’t look like simple depth signings mean that we could see a change in formation?

I think the best way to approach this is to start from scratch.

Tactics in Major League Soccer mean something different to tactics in other leagues. I’ve always said that many games are like Russian Roulette, in that each team is waiting for the other to make a mistake. More so than in other top leagues around the world, chances are pounced upon rather than created.

I realise that is a blanket statement, but it is undeniable that the tendency to self-destruct because of tactical or mental naïveté is more prominent in this league.

When Manuel Neuer sends a 60 yard raking pass to a winger, the winger is expected to trap the ball with a touch or two, whereas in MLS, the opening goal in the showcase game last year happened because the goalkeeper couldn’t sort his feet out. The tactics used in MLS reflect the fact that if someone with a bit of composure strolls onto the park they will tear you apart (think Morales in his first game, when he came on against New York Red Bulls).

The first step in finding the right tactic is to identify the strongest positions in the ‘Caps squad. I believe those positions to be the central/defensive midfield (Laba, Koffie) and the wings (Manneh, Techera, Bolaños), so any new formation needs to make heavy use of those two positions.

There were rumours in weeks past that a three-at-the-back formation could be adopted. I don’t think that is very likely because we arguably only have three MLS-calibre centre backs. If one of them gets injured the whole system would have to change.

A three-at-the-back system also implies wing backs. Are Aird and Adekugbe able to be wing backs? They may have attacking qualities, but there is a lot of running involved. I don’t see Harvey having the legs to do 90 minutes there.

The positives about this formation are that there is loads of space going forward and it favours a possession style of game. The glaring negative is that you have an extra defender on the field, and are therefore wasting one of your attacking talents on the bench.

I do like the shape going forward though; I see Morales/Mezquida in the hole (centre circle in the below picture) with Manneh and Bolaños, with Rivero/Kudo up front. I don’t see where a bulky forward like Blas Pérez fits in this picture, but as he may primarily to be used off the bench, that’s not so much of an issue. 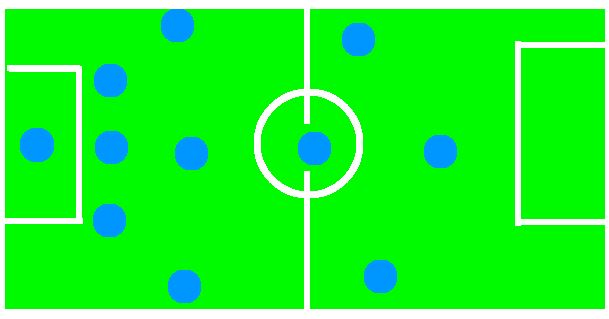 So what if we took out the extra defender and moved him to attacking midfield? This would allow Mezquida and Morales to be on the pitch at the same time, meaning that Mezquida could close down in the opposition’s half.

This does leave the back line a little thin, but if it is properly structured, for example if one of the wing backs hung back when the other one goes forward, it could prevent us getting caught out on the counter-attack. Laba would have to sit really deep, but he does that a lot already! This formation would give the attacking players a lot of fluidity too, and their creativity could tear defences to shreds. 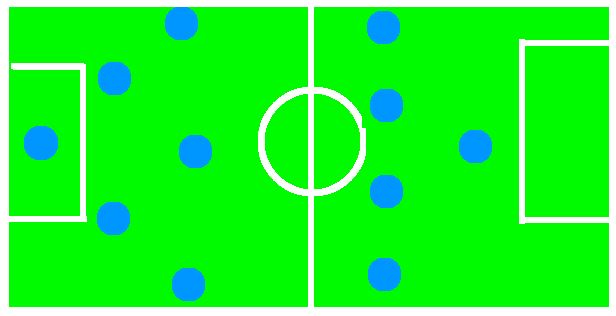 A team could, however, play a two striker formation against our proposed tactics. It would be manageable with the first formation, but would be bad news for the second one. The possibility of being outnumbered is very high if we are caught committing too many people forward. Plenty of teams in MLS play 4-4-2, so I don’t see us playing this formation too often.

So a flat back four then! But what to do with the midfield and forwards?

With the signings of Masato Kudo and Blas Pérez, there is no reason we couldn’t play our own two striker system. With Morales or Mezquida behind them, it could be very effective.

A 4-3-1-2 could be the answer. The wingers would have to be a little deeper than in the 4-2-3-1, but they would have license to go forward when needed. This formation may actually benefit the Whitecaps when they want to work on the counterattack: there will be two players permanently forward, but there will still be enough numbers to defend.

It resembles the 4-3-3 in some aspects, but with an inherent width compared to a three man midfield that is usually used in a narrow formation. Having two forwards also ensures that we don’t leave a man stranded up front. I’m thinking Pérez as a target man, even though I believe he has a multitude of other uses, and he can knock the ball down to Rivero/Kudo.

I really like the balance of strength and trickery that this formation can bring if Morales/Mezquida can provide quality, either over the top of the defence to Rivero or spreading the ball to the wings to Manneh or Bolaños. 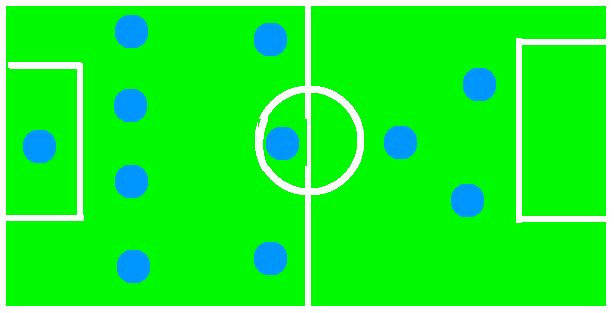 While the 4-2-3-1 formation has brought success and attacking football to Vancouver, and Carl Robinson remains a huge fan of the system, this new formation could be the key to getting two strikers on the pitch.

If a clear frontrunner appears in the forward position and we need to consolidate the midfield, sticking with the 4-2-3-1 would be the way to go, but against weaker teams that we had trouble breaking down last year, I would not be surprised to see this formation.

Robinson went with his trusty 4-2-3-1 formation to kick off the first preseason game against Seattle on Wednesday, producing a 2-1 victory. We’ll soon see if he plans some formation tinkering and experimentation in the remainder of the matches.