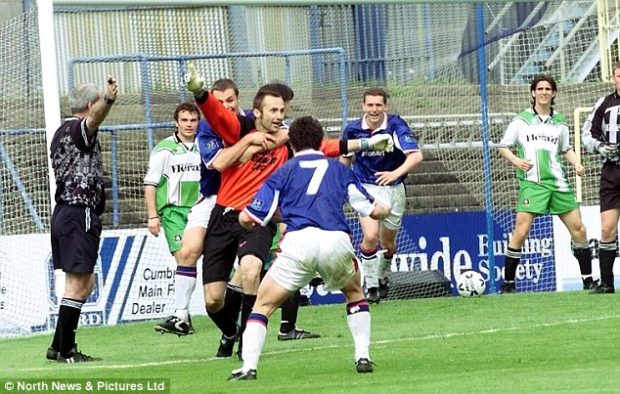 Back in the day, at the turn of the last decade, AFTN also had a daily general football blog. Just some of my random thoughts from the world of football. That disappeared from Blogger in mysterious circumstances. They’ve still never explained why or been able to restore it!

We had a couple of regular fun sections on it, and looking through our files, we thought it would be good to update some of them and bring them back at this time.

Kicking things off is one of my favourites – Things We Love To See In Football. I mean, right now, football itself is that thing, but join us as we travel through some of our favourite football things that we love to see happening during a match.

Goalkeepers are a strange and special breed. Some would say a little bit crazy. They’re definitely unique.

They can be both the hero or the villain with a single save. Etched in their team’s history and talked about for years to come, for good or bad reasons as a result of a big match winning stop or fumble. If they’re not the first choice keeper they can go a season, or even years, without seeing a minute of competitive action. That alone needs a certain mindset.

Some make the headlines in the other penalty box. An ever rarer breed. Goalkeepers who have scored goals, not just saved them.

Now there’s been a number of goalies who have also been their team’s regular penalty taker down the years. That can, of course, be dangerous if their kick is saved and they can’t get back into their own box in time.

The most famous one to spring to mind for me is Colombia’s El Loco, René Higuita, he of the scorpion kick save fame. Higuita scored 41 goals for his clubs in a 25 year career, and three for his country, both from the penalty spot and from free kicks.

Such keepers aren’t exactly commonplace, but they are common enough to not warrant a section from us about them. No, what we love to see in football is when keepers score from a set piece that isn’t a penalty, or better still, from open play.

The buzz of anticipation from the crowd when your keeper heads up into the opposition box to try and become the hero and snatch a point or a win that is desperately needed is a great thing to be a part of. Of course, the vast majority of times it’s a case of what was the point of that and nothing ever comes out of it, but that rare occasion when it does come off is something special. A game you’ll remember for the ages.

I always remember an East Fife game from 1990. We had a keeper in the 80’s, Gordon Marshall, who often took penalties in shootouts, but not in normal matches. But there was one East Fife keeper we talk about in that special category.

Wednesday February 28 was the day and the lads were away to Stranraer in a rearranged Wednesday night match. Now for those that don’t know, Stranraer is on the opposite coast to Fife and is a nightmare to get to. It’s a three-plus hour trip if there was to be no traffic on the road. Midweek, during rush hour, you’re talking five to six hours to get there.

East Fife won 2-0 that windy night, with goalkeeper Ray Charles (not the blind singer – make your own jokes!) scoring the opening goal from a kick out that bounced and then flew over the Stranraer keeper’s head.

It’s the only time an East Fife goalie has scored in my lifetime, but I don’t just remember that game for the history of it, I remember it with a sense of gnawing anger as that was the only game that entire season home and away that I missed as I couldn’t get the time off work. Of course it was to happen in that one. There were seven East Fife fans in attendance that night. They’ve gone down in Fifers folklore as much as Ray Charles!

Keepers scoring is still not that regular an occurrence, despite their best efforts, so that when it does happen it still feels like a special moment. Here’s three of my favourites from down the years. Share your own ones in the comments!

Let’s kick this off with a Canadian goalscoring goalkeeping hero – Quillan Roberts.

Current Forge FC keeper Roberts was a 16-years-old Toronto FC academy prospect at the time of the 2011 FIFA U17 World Cup in Mexico. Canada had lost their opening group game against Uruguay 3-0 and headed into their second match against England as huge underdogs.

Scoreless at the half, England had gone ahead a minute after the restart. Canada surprisingly tied things up four minutes later, but fell behind again in the 77th minute and it looked like that was to be all she wrote. But then with three minutes to go, this happened…

The look of disbelief on Roberts face is priceless. He really doesn’t know what to do to celebrate the historic moment!

What is even more remarkable in this story is that Roberts was the back up keeper and was only playing after the first choice goalie, current Whitecap Max Crepeau, was injured towards the end of that first group game against Uruguay.

As for English goalkeeper Jordan Pickford, he can console himself as now being in the same category as English goalkeeping “greats” like David Seaman, David James, and Rob Green when it comes to royally mess things up on the world stage.

Good old England. They never let us down!

Let’s bring you right up to date for the next one, and it’s a stunning, dramatic goal that many of you will probably have already seen in this year’s CONCACAF Champions League.

It comes from the second leg of the Round of 16 tie between Mexican powerhouse UANL Tigres and El Salvador side Alianza FC.

On paper, the match should have been a formality. But of course, football isn’t played on paper. Alianza headed into the second leg with a narrow 2-1 lead. Tigres had the away goal, and there seemed to be only one way this tie was heading. Alianza had other ideas, even when going down 3-0 on the night.

Tigres had come out all guns blazing and seemed to be coasting, ahead 4-2 on aggregate. A double from Alianza striker Juan Carlos Portillo in the 34th and 42nd minutes stunned the Mexicans and put the El Salvador minnows ahead in the tie on away goals.

Surely Tigres would get a bollocking at half time and get the job done in the second half. The minutes ticked by, hitting the 90 minute mark, and there were no more goals for either side.

We were facing one of the biggest shocks in the history of the tournament with just over 20 seconds of the four minutes of stoppage time remaining. Tigres had a free kick that was floated into a packed Alianza box, and their Argentine keeper Nahuel Guzman was waiting…

What a header, what a goal call by the commentators, and what scenes of emotion.

Tigers won the tie 4-2 on the night, 5-4 on aggregate, and Guzman wrote himself into club folklore.

I’ve saved the best till last and it really is going to take something special to knock this off its perch as my favourite ever goalkeeper goal. Not for the quality of the finish, but for the importance and dramatic timing of the whole thing.

Let me set the scene.

It was the last day of the 1998/1999 English football season. Carlisle United sat at the bottom of the Third Division with one game to go, one point behind second bottom Scarborough United. They needed a miracle to avoid the drop to the non-league Conference, thus losing their status as a Football League side that they had held for 71 years.

Both Carlisle and Scarborough were at home to top half sides, Plymouth Argyle and Peterborough United respectively. Carlisle had to win and hope for the best elsewhere.

It wasn’t looking good for Carlisle when Plymouth went ahead. They fought back to level, but couldn’t get the go-ahead goal as the match reached the 90 minute mark. Word came through that it was over in Scarborough and their relegation rivals had secured a point in a 1-1 draw.

The Boro fans were celebrating at the Athletic Ground, thinking they had done enough to survive the drop. What they didn’t know in those days of much less technology was that the Carlisle game has just entered the third of four minutes of time added on and Carlisle had won a last gasp corner.

The Brunton Park faithful roared, manager Nigel Pearson, the current Watford boss, tells everyone to get into the box, including their goalkeeper. It was set up for someone to be a hero, but no-one, not even the player himself, expected it to be goalkeeper Jimmy Glass.

If you’ve never seen this moment before, sit back and enjoy it, unless you’re from Scarborough.

I genuinely don’t know how many times I’ve watched this over years, as someone with no interest in Carlisle, so heaven knows how many times their own fans have!

Glass was in the right place, at the right time, and the scenes of bedlam when the ball hit the net from his teammates and the supporters is incredible. He’s said in interviews afterwards that he felt he had all 3,000 Carlisle fans on top of him after he hit the deck.

But there’s even more to this remarkable story.

Glass was something of a journeyman keeper, with eight clubs in his ten years in the game up to that point. And he wasn’t even Carlisle’s player! He had come to Brunton Park on an emergency loan from Swindon Town late in the season and this was only his third, and last, match for the club. What a way to leave your legacy!

It’s not all happy endings though.

Carlisle were to be relegated to non-league football five seasons later, although they bounced back up at the first time of asking. Scarborough were not so lucky. That relegation not only cost the seaside club their league status, it was something that they simply never recovered from financially.

Two further relegations down the non-league pyramid ended with Scarborough going out of business on June 20, 2007. A proud club of 128 years was no more, undone, in part, by a scrambled goal from a goalkeeper.