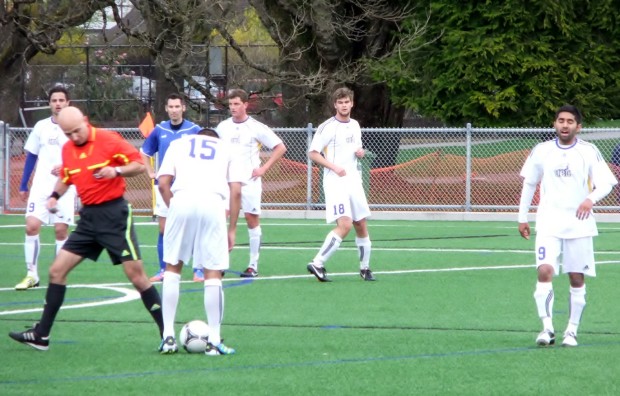 Saturday’s Provincial Cup action saw six teams clinch their semi final places over the four Men’s competitions, with both the A and B Cups providing some entertaining action.

Led by another strong performance from Whitecaps Residency player Gagan Dosanjh, who grabbed one goal and two assists, Vancouver Thunderbirds continued their great Provincial Cup run and became the first team to claim a spot in the A Cup semi finals with a shock 3-1 win over VMSL Champions Columbus FC at Memorial Park.

The match was a fantastic advert for the Cup, with four goals, some great action and what seemed to be around ten bookings.

With seven in the first half, it was surprisingly that no-one was sent off, as big Ruben dishing them out all over the place.

The game started at a good pace, with both teams looking dangerous going forward and the action moving from end to end.

The Thunderbirds took the lead in around the 17th minute when a long thrown in from the right was fumbled by the Columbus keeper right in front of Gagan Dosanjh, who had the easy job of firing home from six yards out.

Columbus looked to hit back and played some nice passing football. Milad Rahmati was looking particularly dangerous and forced Luke O’Shea to parry a fierce shot from the edge of the box in the 21st minute.

Four minutes later and Rahmati brought another stop out of O’Shea after some lovely work on the edge of the box.

The Thunderbirds nearly doubled their lead with seven minutes of the half remaining.

Sean Haley dispossessed former Whitecap fan favourite Luca Bellisomo just into the Columbus half. Haley played in Dosanjh, who took a touch or two to find the right angle before drilling a low shot narrowly past the right hand post.

Columbus suffered a major blow two minutes later when Rahmati was forced to go off after suffering a crunching tackle earlier in the half. It was a challenge which had gone unpunished, in what was becoming a physical encounter.

With the first half two minutes into stoppage time, the Thunderbirds hit a deadly blow.

A deep free kick was knocked on to Haley. He played the ball inside to Dosanjh and the Thunderbirds captain ran past four Columbus defenders before hitting a cross towards goal, which Niall Cousens was on hand to turn in from two yards out, as Robbie Giezen desperately tried to get a foot in to clear.

Columbus changed their keeper at half time and were hoping to regroup in the second and get themselves back into the game, but they fell three behind just five minutes in.

Dosanjh played a dangerous cross to the back post which Steve Johnson headed towards goal and Greg Smith or Cousens (was hard to see!) was on hand on the goalline to make certain.

Columbus hit back immediately though with the goal of the game from a fantastic flying header from former Whitecap Tiarnan King.

The home side pushed for a second and Giezen came close with a fine turn and shot. Columbus forced a couple of corners and Tino Cucca curled one straight of the bar just before the hour mark.

Columbus had a good break up the right in the 74th minute and King played a dangerous ball into the six yard box but O’Shea smothered it before Bellisomo could pounce.

The last real chance for Columbus came with ten minutes remaining when they won a free kick on the edge of the Thunderbirds box. King hit a nice curler but O’Shea was on hand to tip it over.

Neither said had clear cut chances to add to the scoreline in the closing moments and when the final whistle blew, Vancouver Thunderbirds moved into the semi finals as deserved winners.

They will now host the winners of the all VMSL clash between Surrey United Firefighters and Estrella de Chile which takes place on Sunday afternoon in Cloverdale.

You can see some video of the first two Thunderbirds goals below (well as much of the first as you can with the lino in the way!):

In Saturday’s action in the Keith Millar B Cup, Langley FC Dynamo of the FVSL were given a tough time of it on the island before running out 3-2 winners in an exciting game with Prospect Lake Lakers in Saanich.

Scoreless at the half, Langley opened the scoring in the 61st minute and quickly added a second before the Lakers pulled one back immediately. The VISL side levelled things in the 72nd minute, before the Dynamo hit the winner with seven minutes remaining to set up a home semi final against Sarajevo FC.

In the only Masters game of the day VMSL side Columbus FC beat Powell River United of the VISL 2-0 at Burnaby Lake.

Three of the quarter finals in the Doug Day U21 were played Saturday. Metro-Ford Jr Wolves ran out 2-0 winners against Estrella de Chile, whilst West Van FC won 1-0 against Mid Island Highlanders in Ladysmith. Another island side, Victoria Highlander Prospects, crashed out 4-1 away to defending champions Port Moody Gunners in a repeat of last year’s final match up. Port Moody now travel to West Van for next week’s semi final.

With the weekend’s action wrapping up Sunday, there’s still time to get out there and catch some games. You can find all the match ups, kick off times and venues HERE