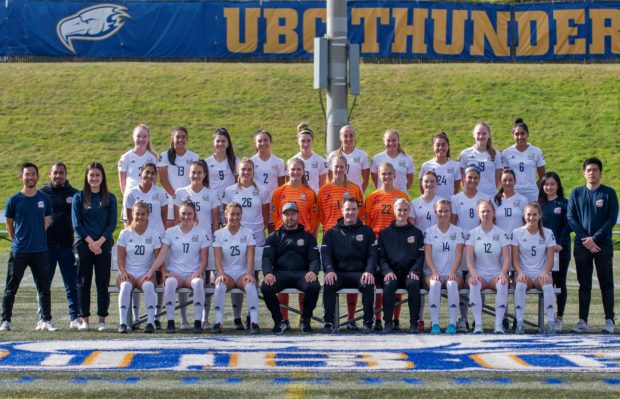 What a year it’s been for UBC soccer. Both their men’s and their women’s sides won the Canada West Pacific Division and both now host this weekend’s Final Four tournaments at Thunderbird Stadium, places at next week’s U SPORTS nationals up for grabs.

To celebrate and get you prepared for what is sure to be a fantastic three days of football, we’re bringing you our first Thunderbirds Week for a couple of years as we look at the season so far for both UBC teams, talk with both head coaches, and bring you a couple of interviews with some of the star performers.

And we’re kicking it all off with a season recap of the dominant Thunderbirds women’s team.

Last year’s U SPORTS women’s soccer championship left a bitter taste in the mouths of Jesse Symons and his talented Thunderbirds squad. It also lit a fire under them for this season.

Heading to Cape Breton as defending champions, having won their record setting 7th title in 2019 before Covid wiped out their chance to defend it in 2020, the minimum expectation for UBC was a medal.

They weren’t heading to Nova Scotia as favourites, that tag had gone to their long-time rivals Trinity Western Spartans who were coming in on the back of an unbeaten season. But with the draw keeping them apart, another battle between those two powerhouses was many people’s pick to be the gold medal game.

But then along came fellow Canada West side MacEwan Griffins in a closely fought semi-final that saw the Edmonton side win 1-0, with the solitary goal coming six minutes into extra time. MacEwan went on to beat Trinity Western in the final and lift their first U SPORTS title, while UBC went down to a 3-1 penalty shootout loss to Laval after their bronze medal match finished scoreless after 120 minutes.

For a UBC side stacked with talent, a fourth place finish felt like a massive underachievement and that was something everybody connected with the program wanted to make amends for in 2022. So far, they’ve done that in some style, running rampant in the Canada West regular season where they finished with a record of 13 wins and just one defeat, racking up 48 goals and conceding just seven in their 14 matches, keeping nine clean sheets in the process.

But it wasn’t just team records that were sent tumbling this season, star striker Danielle Steer smashed the all-time Canada West career points record in her senior year, equalling the previous record of 65 points set by former teammate Jasmin Dhanda in 2017 with two games to go, beating it in the penultimate game of the regular season, and then setting the new record at 71 points the following night, an evening where she also tied the individual single season points record of 22.

Those 13 wins were the most victories in a season in team history, giving UBC not only the number one seeding for the Canada West playoffs, but seeing them ranked number one across the country as they headed into the postseason. 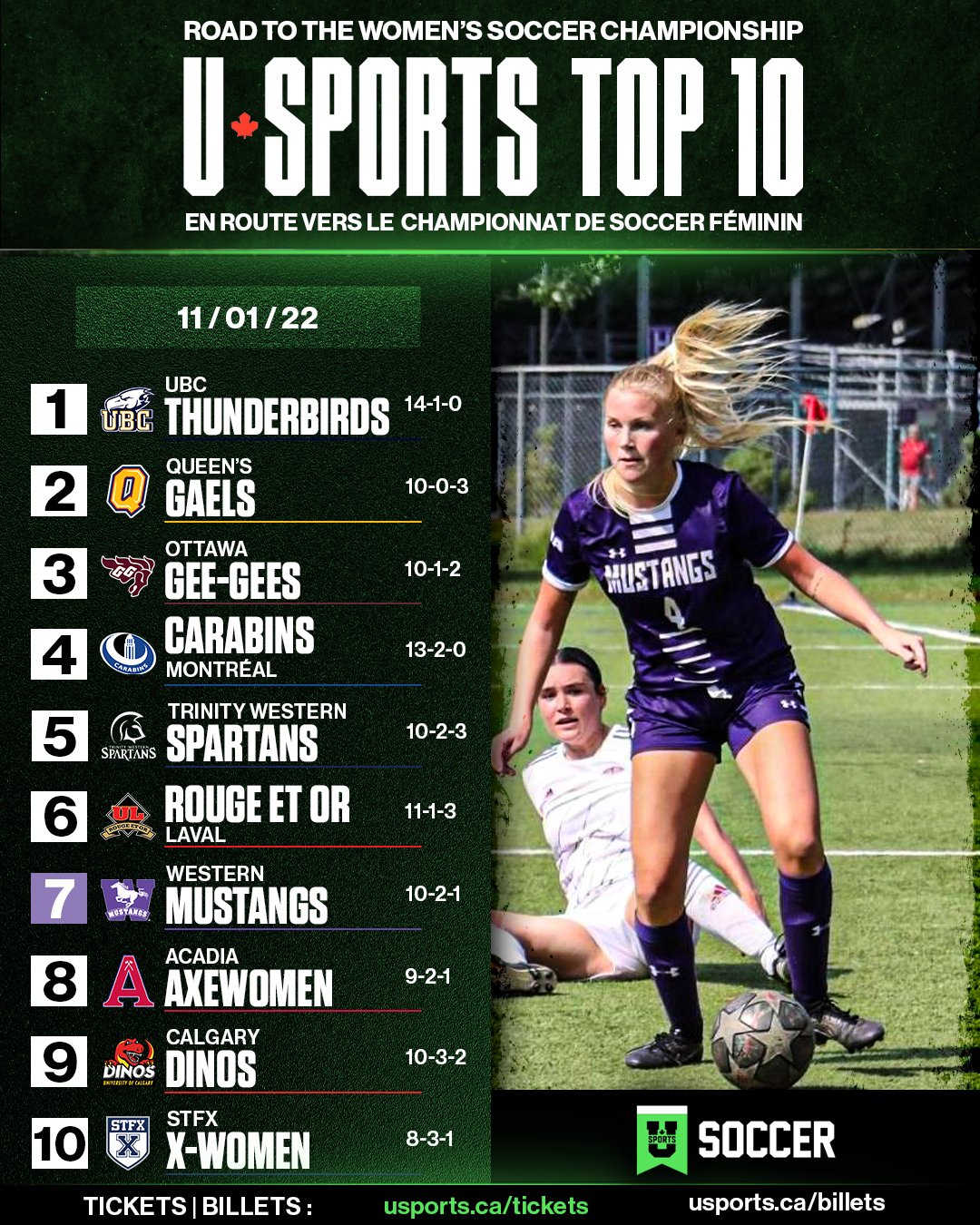 “Our job now is to prepare for the playoffs,” Symons told AFTN after they closed out their regular season with a 6-0 shellacking of the Fraser Valley Cascades. “To win 13 times this season, the first BC team ever to do that in the history of Canada West, and to match the highest points ever is pretty impressive. A good season, now the real season for us begins.”

And that began in some style on Friday night with an 8-1 demolition of Regina Cougars in the quarter-finals that saw hat-tricks for Katalin Tolnai and Jade Taylor-Ryan, along with goals for Nisa Reehal and Sophie Damian.

“Overall, these are nervy games,” Symons after the game. “A quarter-final to get to a Canada West semi-final and definitely heavy favourites for the game. Our statement overall was to find an early goal, really get after them, and to get into their penalty box early and that was a credit to our front three and as the game wore on we were able to find better channels.”

It was a game that epitomised just how dangerous this UBC attack is this season. Fourteen different players have found the scoresheet for the Thunderbirds this year, with Steer leading the way on 14, Tolnai on 13, and Reehal on 9.

But right behind those three veterans is second year forward Taylor-Ryan, who bagged a second half hat-trick to make it six goals in eight sub appearances and looks set to be the next in a long line of UBC striking standouts with Steer, and potentially Tolnai, moving on from the program.

“Jade scores goals, that’s a little phrase we have,” Symons said. “She is such a goal scorer and what a player to come in. She’s definitely learning a lot from Dani and Katalin. She’s one that when she goes in, she’s got a job to do and she knows it. She showcased herself with the qualities she has as an attacking player.”

Friday night’s first half hat-trick hero was Tolnai. The graduating attacker is having a career year, her 13 goals following on from her seven in the summer with Varsity FC in League1 BC. That saw her named to the Canada West All-Star First XI team for the season alongside teammates Steer, defender Sophia Ferreira, and goalkeeper Sarah Johns. 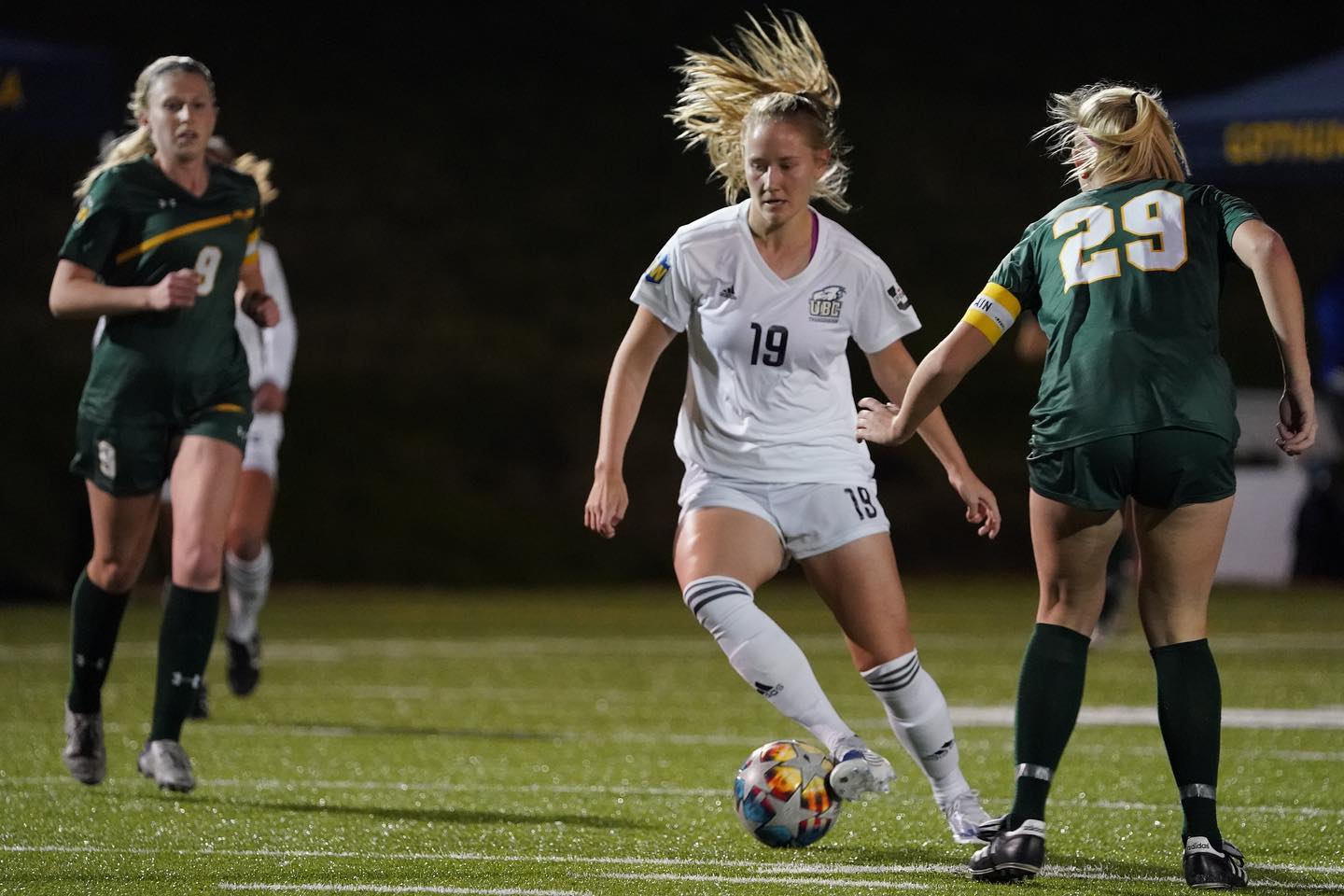 It’s been a performance that’s put her on the radar of the Hungarian national team and there’s no doubting that the striking partnership she has with Steer this season is one of the deadliest in all of U SPORTS.

“They have everything,” Symons says of his strike duo. “They also have that work ethic and mindset and are such team players. Their finishing ability when they’re on is lethal.

“They’re really finding a chemistry that’s difficult to deal with, with what they’re doing. Our job now is to prepare for these playoffs. It’s been a good season but now the real season begins.”

UBC’s identity under Symons is to get on teams early and find ways to score goals, all built on a very stingy defensive footing. With 14 goals in their last two matches, and not taking their foot off the gas when the games are basically done and dusted, it’s certainly working.

“We need to have that personality going into the playoffs,” Symons feels. “In terms of the attacking side of things, I think we’re flying right now. We’ve found ways to play and keep the ball and open teams up. That, to me, is probably a little bit of difference this year so far [to last year]. We’re scoring a lot of goals and we’re creating a lot of chances and it’s not just Dani and Kat, it’s a lot of them. We have talented players all over the pitch.”

This year’s Canada West Final Four was meant to be held at the highest remaining Prairie Division seed, but with all four team losing their quarter-finals last weekend, UBC are now the hosts this Friday and Saturday as the top seed in the Pacific Division where they will battle against Calgary Dinos, Thompson Rivers Wolfpack, and Trinity Western Spartans.

With three of the four teams advancing to this year’s U SPORTS nationals in Laval in Quebec, it would be a major shock if UBC are not in among that number.

“It’s one game at a time for sure, but we get two cracks at nationals now,” Symons told us. “We also have a semi-final where we want to get back to a Canada West final again and keep this season rolling. These players showed that they have the mindset to get after it and I’m hoping next week we have the same mindset.”

First up for UBC is their semi-final and the chance for revenge against the only team to have defeated them this season, Calgary Dinos. The Thunderbirds fell to a 3-2 defeat in Alberta on September 25 and you know they want payback.

That game goes at Thunderbird Stadium at 5pm on Friday evening, with the all BC clash between TWU and TRU kicking off at 8pm. You can get tickets HERE, but if you can’t make it along, AFTN will have the call for both games on Canada West TV.