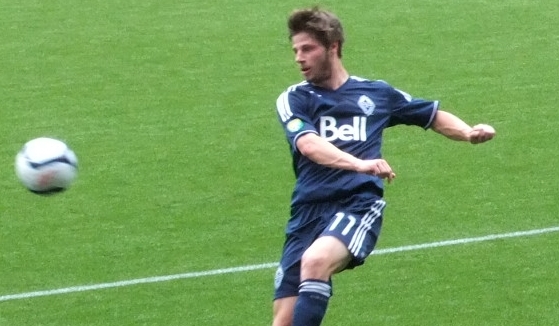 Reynold Stewart is in his fifth and final year as a UBC Thunderbird and the talented midfielder is looking to go out in style with back to back CIS Championships.

The former Whitecaps PDL player has had a standout final season, scoring 8 goals and contributing 7 assists for the Thunderbirds on his way to picking up Canada West MVP honours.

“It’s an excellent feeling. The individual awards are fun to receive.” Stewart told us after winning the Canada West Championship on Sunday.

But Reynold, like the others earning individual plaudits right now, is quick to point to the strength of his team at UBC, in what has been an excellent year.

“The season’s been amazing. It’s an amazing group of guys, all extremely talented players.

“We lost a whole bunch of starters going in to the season and no-one was really sure what the room was going to feel like or on the field even, so it was really nice to have a successful season like this.”

UBC finished the Canada West regular season with a record of 12 wins and 1 defeat, the highest ever number of wins by a team in the Conference. The loss came early when Fraser Valley Cascades shocked many with a late 1-0 away win in the second game of the season.

On the back of going undefeated in 2012, and with a lot of new squad members, it was the best thing that could have happened to the team to avoid complacency and remove any feelings that they didn’t have to work hard to get the results.

“Absolutely. I think all of us were a bit overconfident. After the first game and after preseason beating SFU, I think our heads got a little bit too big. That was the best thing that happened to us, that loss early in the season. We’ve been on a roll ever since, so it’s trying to keep it going.”

With 13 wins now on the bounce, UBC are heading into the CIS Nationals as number one seeds and defending champions and kick off their defence against Montreal on Thursday.

Senior Stewart was one of a number of players in the squad that won the Championship last year. What can he and his peers share with the newer members of the group about the whole experience and what it takes to get the job done?

“Just that every game is going to be a battle and the longer that teams are allowed to hang in there for, the harder it gets. Last year, we were able to score early goals, I think in all of our games. That really puts the other team under pressure and it stops them from being able to park the bus against us, which has been somewhat effective in the past, but it’s just about wanting it every single time you’re out there and every tackle you get in to.”

Stewart will graduate with his Arts degree next spring. What his footballing future holds in store for him after that is still uncertain, and whether he will look to give it a go in the professional ranks of the game. But he doesn’t want to get too ahead of himself.

“I haven’t really decided. After this season’s done I’m going to evaluate my options and see what opportunities are available to me, but right now I’m just focussing on the Nationals.”

His coach at UBC these past five years, Mike Mosher, certainly feels he has what it takes to play at a higher level.

“Reynold is a top, top player. I think he’s got a pretty complete toolkit. He’s got great technique, he’s a good passer, he’s an intelligent player. We played him a lot in the summer in a holding role (in PCSL), so he got better defensively and sort of learned the expectations in there a little bit more.”

“I think he’s got the abilities to go to another level if he wants it” continued Mosher. “And that’s up to him. Does he have the desire to, and I think he does. It will be interesting to see where he ends up in the next three, four months.”

Stewart played the 2012 PDL season for the Whitecaps and impressed in his 15 games. We wanted to see him back this year to continue his development and were surprised when he didn’t return. As Reynold explained though, that was his difficult choice to make.

“They gave me the option to come back. I really enjoyed playing the season prior, it’s just I had to sort of work full time if I wanted to live in Vancouver.

“That was a really tough decision. I had such a great time the season before and it was really hard to turn that offer down.”

And there in a nutshell is what is wrong with the game in Canada right now.

With few available football career paths, once they leave the college and youth ranks, many talented players have to choose working to live rather than having the opportunity to continue playing the game they love and are good at. Whilst some give it a shot overseas, others just have no real options as to where to go if they stay in Canada.

Hopefully with more NASL and USL Pro teams on the horizon this will change in the not to distant future for the like of Reynold Stewart and the many other talented players that we have in BC right now.

We sit on the potential of another golden footballing age in the province, with the talent on display up at UBC and SFU, and elsewhere like the Whitecaps Residency. They need somewhere to go, somewhere to keep developing in a full time environment.

Let’s hope the authorities can get their act together and that talent is not wasted and we lose too many to the game at a higher level.