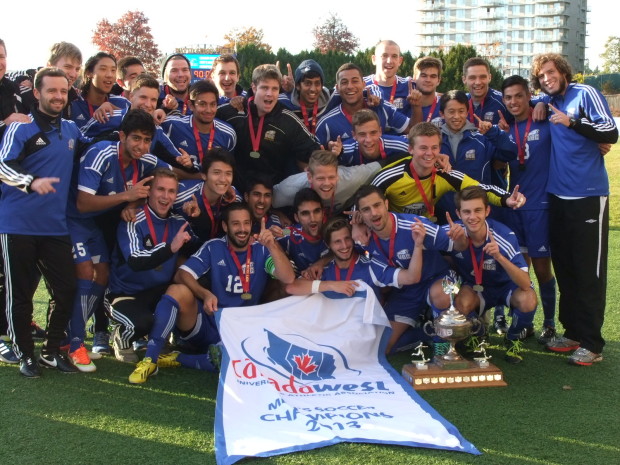 Four goals in the first half hour from Vancouver Whitecaps PDL player Niall Cousens helped UBC Thunderbirds win back to back Canada West Championships in a 6-1 demolition of Saskatchewan Huskies at Thunderbird Stadium on Sunday afternoon.

Both UBC and Saskatchewan now head to New Brunswick for the CIS nationals, which start on Thursday, as we kick off Thunderbirds Week here on AFTN.

The defending Champions Thunderbirds will be looking to become the first back to back CIS Championship winners since the Laurier Golden Hawks in 2000 and 2001.

If they achieve the feat, it will be UBC’s first back to back national title since their fourpeat from 1989 to 1992. That team is now in the Hall of Fame and includes current UBC head coach Mike Mosher, who played in three of those Championship wins.

When we spoke to Mosher back in August he told us that the storied history of UBC in Canadian college soccer is certainly a factor that drives the current squad on.

“They were present at a banquet when they were recognised amongst all their peers and what not for their accomplishment of winning a 2012 Championship. Fortunately I was also there, not only as a coach but as an inductee for Hall of Fame, with all my peers, and we were fortunate to win three national championships in a row.

“Our group saw that and the emphasis now is can they write their own history and go down as legends and future Hall of Fame if they can go back to back?”

Winning their second straight Canada West Championship is the first step of that journey.

And what a step it was.

UBC dominated from start to finish and the game was already over as a contest by the half hour mark, as the visiting Huskies were blown away.

It only took the Thunderbirds eight minutes to get off the mark and it was started and finished by two Whitecaps PDLers.

Harry Lakhan sent a deep free kick into the Huskies box. Milad Mehrabi’s header was saved by Michal Bandula but the rebound broke to Niall Cousens who hit home from close range for this first of the afternoon.

Cousens grabbed his second and doubled UBC’s lead in the 17th minute when he headed home a Navid Mashinchi cross from the left at the back post.

The Thunderbirds were seemingly coasting but the Huskies pulled one back from out of nowhere four minutes later.

Jordian Farahani’s free kick ricocheted off the UBC wall and was turned onto the post. The rebound bounced up to Luigi Bekwayo who met it and headed past Luke O’Shea to give Saskatchewan some renewed hope.

That hope was to only last another seven minutes before UBC hit back with three goals in a blistering six minute spell.

Cousens completed his hat-trick when he collected a pass from Lakhan and turned beautifully before firing past Bandula for 3-1.

Two minutes later it was four for UBC and the big striker. Mashinchi was again the provider, this time from the right, and Cousens stood his ground under pressure to head home.

Mashinchi, who is a Whitecaps Residency graduate and made an appearance for the Whitecaps USL team, grabbed his third assist of the afternoon in the 34th minute when his cross was palmed away by Bandula, only for it to fall to Milad Mehrabi who drilled home to make it 5-1.

That’s how it stayed till the half but full credit to a shell shocked Saskatchewan who came out for the second half and kept things tight.

Cousens thought he’d grabbed his fifth of the afternoon in the 58th minute but he was ruled offside, and two minutes later Mehrabi came close to gabbing his second, when he rounded the keeper but his goalbound shot was cleared off the line by Carson MacDonald.

The sixth goal and final goal of the game came in the 68th minute when the ball fell to Mitchell Popadynetz in the box and the first year defender showed great composure to make room for himself before finishing with aplomb into the bottom left corner.

UBC finished the game with ten men when substitute Otis Sandhu saw a straight red in the 83rd minute for a crunching, mistimed tackle on MacDonald.

All that was left was for UBC to receive their trophy and the celebrations to start (you can see the trophy presentation below), but the team gets back to the hard work right away as they now fly off to New Brunswick for the Nationals.

Whitecaps PDL player Cam Hundal put the Vikes ahead with a well taken 32nd minute goal and that was how it stayed until the Cascades levelled in the 72nd minute when Justin Sekhon headed home a rebound from a Josh Brown shot from close range. Ryan Liddiard won the game for Fraser Valley when he showed good footwork in the box before firing home six minutes later. Hundal nearly forced extra time but had two great efforts well saved by Mark Village in the Cascades goal.

Whatever happens next week in Fredericton, it’s already been a stunningly dominant season for UBC.

Milad Mehrabi led the Conference for both goals (11) and points (17), whilst Whitecaps PDL player Harry Lakhan led in assists (10). The team also swept the board with all five awards at the annual Canada West Men’s Soccer Awards last week.

The full CIS tournament schedule has now been confirmed and UBC will kick off their repeat bid with a quarter final against Montreal on Thursday. The game kicks off at 1.30pm Atlantic time (9.30am Pacific). The game will be streamed live at: www.CIS-SIC.tv.

We’ll bring you coverage of the Championships later this week on AFTN as part of our first ever Thunderbird Week, where we’ll also have interviews with Head Coach Mike Mosher, assistant coach and current Whitecap Tommy Heinemann, Canada West MVP and Whitecaps PDL player Reynold Stewart, and the four goal Championship game hero and top scorer for the Caps in the 2013 PDL season, Niall Cousens.