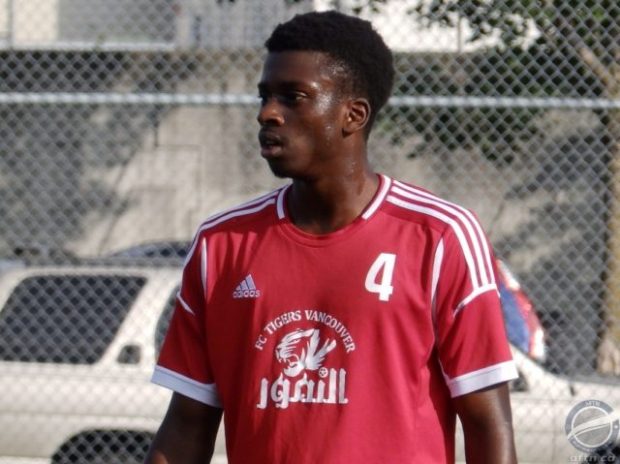 Rino’s Tigers were left as the last team with a 100% record after a high scoring week of Vancouver Metro Soccer League Premier Division action.

In a week that saw 25 goals scored in the six Premier Division matches, one of which was a no scoring draw, Rino’s sit two points ahead in the standings as one of three teams still unbeaten after week four of the new VMSL season.

It was a busy Friday night with four matches on the slate. The action kicked off at Burnaby Lake as Guildford FC FASA grabbed what could be a huge 4-2 win over ICSF Columbus come the end of the season.

Columbus started strong but couldn’t find the back of the next and it was FASA who headed into the break with their noses in front thanks to Ramsey Alfantazi’s strike ten minutes before half time.

Columbus tied things up just before the hour mark with a great individual goal from John McEown. Ibrahima Basse put FASA back in front midway through the half, leaving Columbus pushing hard for another equaliser. Adriano Negri saw an effort crash off the bar, before scrambling the ball home in the 89th minute to finally make it 2-2 and seemingly giving the promoted side a share of the points.

Things immediately got heated. FASA’s Radwan Ali was sent off after picking up his second yellow for stopping Columbus taking a quick throw in. That led to a mass brawl, which ended with Columbus’ Mark Baldisimo and Luigi Polisi both being sent off.

The action wasn’t over yet, and Brandon Bangambee was to prove to be the FASA hero, striking twice in the large amount of stoppage time added on to give Guildford three massive points. 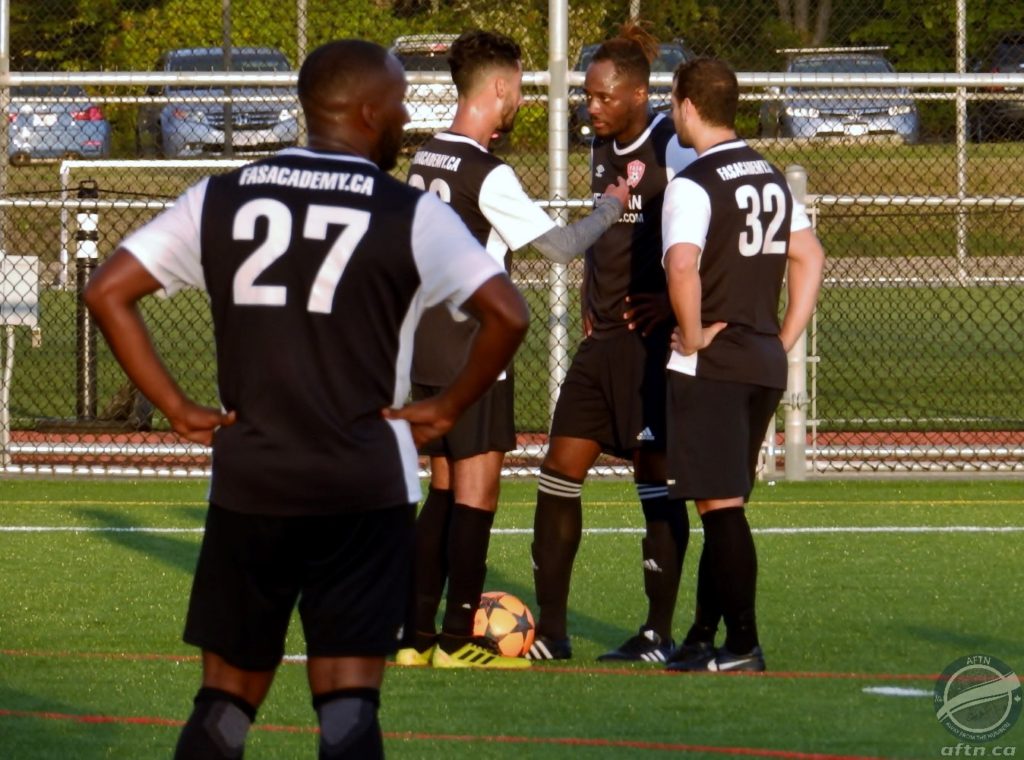 When the fixtures came out, no-one likely expected the week four clash between Coquitlam Metro Ford Wolves and CCB LFC United to be a basement battle, but with just one point between them, both teams were desperate for the win. It was the Provincial champs of CCB who got it, claiming their first points of the new campaign with a 4-2 victory.

An unexpected result after the first half hour of play that had seen Juan Sanchez and Jules Chopin fire Metro Ford into a 2-0 lead. Elie Gindo pulled one back for CCB before half time, and they then took the game to Coquitlam in the second half.

Kristian Yli-Hietanen and Nic Morello had put the Surrey side ahead by the hour mark, before Yli-Hietanen was sent off for a second booking. That wasn’t to deter CCB though and they secured the three points, and their first win of the season, through former SFU man Dzenann Bezdrob.

West Van continued their unbeaten start to the season with a 4-2 win over Club Inter EDC Burnaby at Burnaby Lake.

The Amblesiders fell behind in the 4th minute as Rizal Ganief fired Inter in front. West Van tied things up in the 34th minute through Eoin McCormack with the first of three unanswered goals for the visitors. Paul Kelly put West Van ahead four minutes into the second half, before Dylan Bams made it 3-1 a minute before the hour mark.

Gilly Kyne pulled Inter to within one with six minutes remaining, but they couldn’t stage a dramatic comeback two weeks running and Keith Jackson finally put the game to bed for West Van two minutes into stoppage time.

Unbeaten Surrey rivals Pegasus SFC and BCT Rovers Hurricanes were involved in a fantastic battle at Newton, but it was the Hurricanes who kept their unbeaten record intact in a hard fought 3-2 victory.

The first half was goalless but the action exploded in the second. Yassin Essa put Pegasus in front in the 53rd minute before being pegged back 12 minutes later.

The Horsemen went back ahead through former WFC2 man Sahil Sandhu in the 71st minute, but their lead was to last only one minute this time before Cam Hundal brought the Hurricanes instantly level again. Both teams fancied the win, but it was the Hurricanes who were to get it, with Ryan Dhillon hitting the winner ten minutes from time.

Rino’s got on the scoresheet early through Omar Rostant’s goal six minutes in, but they had to wait until nine minutes before the end for Tomi Fagbongbe (main picture above) to hit Tigers’ second and secure the three points, pouncing on a loose Norvan header to run in on goal and finish nicely at the near post.

You can see highlights of the match below:

And after all of those matches, the VMSL Premier Division standings are as follows: 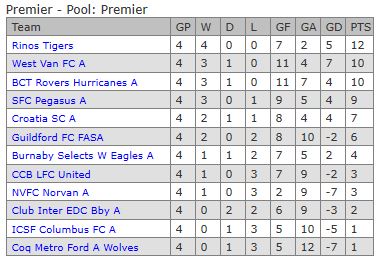