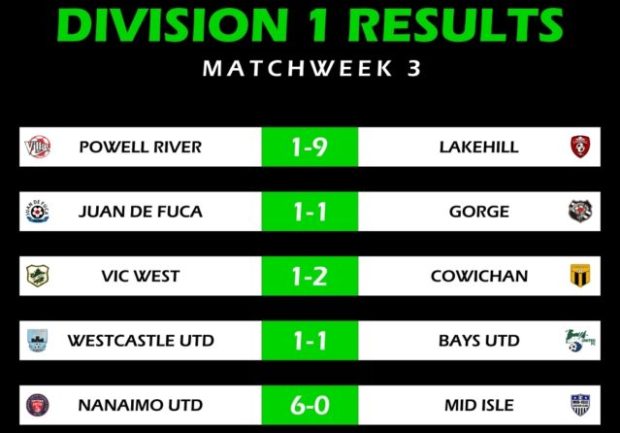 It was another expect the unexpected type of weekend last week in the Vancouver Island Soccer League (VISL) top flight.

The opening game of the weekend saw Lakehill go into Powell River and they destroyed the Villa squad 9-1. Jon Shah had four goals, Matthew Olaka (last week’s Footballer of the Week) continued his goal scoring frenzy by adding two, while Nick Moore, Jagdev Grewal, and Aldo Francky all added singles for the Reds. The lone goal scorer for Powell River was Russell Pielle.

Westhills was a busy venue on Saturday. The 6pm game saw hosts Juan de Fuca battle Gorge to a 1-1 draw. Scoring for JDF was Austin Larratt, and scoring for Gorge was Zakaria Bougraine.

Finlayson Turf on Saturday saw visiting Cowichan come into town, and it was the defending champs who got their first win of the new season, defeating Vic West 2-1. Craig Gorman and Ayden Lamont had the goals for Cowichan, with Adam Almeida getting on the scoresheet for Vic West.

The Game of the Week was at Westhills at 8pm, and it did not disappoint.

A fast paced game that had plenty of offensive opportunities for goals, but it was solid defensive play and goalkeeping that ended up being the story as Westcastle and leaders Bays Utd fought to a 1-1 draw.

The opening goal came from Keenen Colley for Westcastle, with Bays getting their equaliser from Patrick Nelson.

The game featured one of the most exciting offensive players in the league in Goteh Ntignee, who had an exciting first half creating many chances and opportunities. The second half was a different story as the Bays defence were outstanding and held him to nothing.

There were excellent performances all around and just a great game to take in. And you can see photo of the match from Kelly Wallace posted on the VISL Facebook page.

The final match of the weekend saw cross town rivals Nanaimo and Mid Isle face off.

It was to prove to be a no contest as Nanaimo defeated the struggling Mid Islanders by the score of 6-0.

Andres Algarin had four goals for Nanaimo, while Caled Nwameme and Matthew Brown chipped in with one each. Earning the shutout and clean sheet for Nanaimo was Geoff Hackett.

So a lot of goals and a lot of action, all of which left the VISL Division 1 standings looking as follows after Week 3: 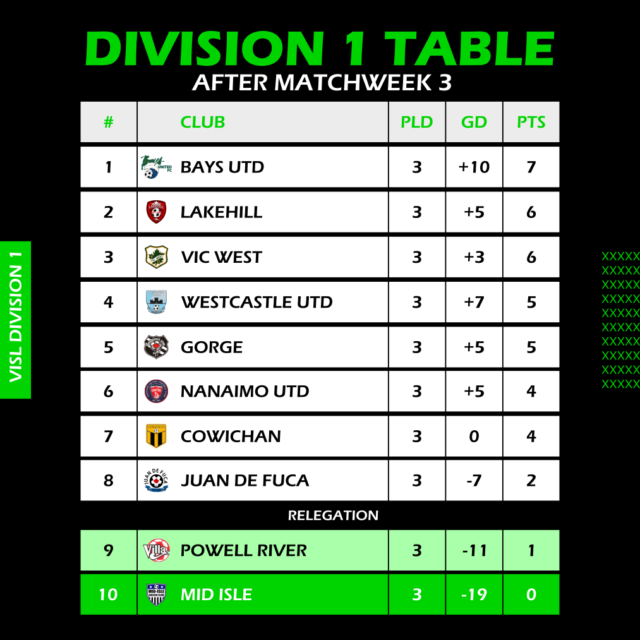 While it is early in the season, one cannot help but see what is happening with some of the clubs already. Most surprising is seeing Mid Isle in the cellar. They will need to pick up their socks to turn things around quickly.

One thing is for sure – there has been a lot of goals so far this year! Here is the goalscoring leader-board, with some individual players on track to score 30+ goals if this pace continues. 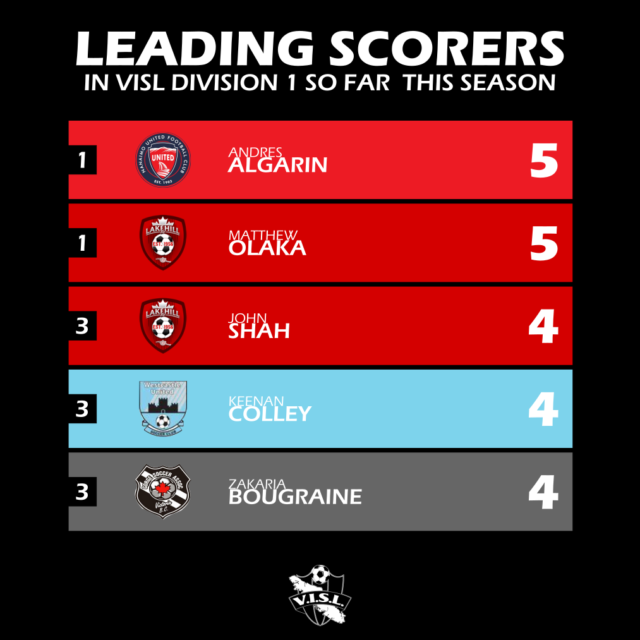 This weekend looks set to be another cracker.

Friday gets off with a bang as Gorge host Westcastle at Hampton Park.

This will be a good test for the black ‘n’ white as they face a young and quick Westcastle team who will look to continue their quest to achieving their first ever Garrison Cup as Division 1 Champions. Some are saying that the young kids are the team to beat this year – and it is hard to argue!

Another Friday night battle will also be happening in Saanich, this one will have Lakehill hosting Nanaimo at Braefoot Park. Other than a shaky opening game, Lakehill have looked great and will look to stay on the positive side of things. Nanaimo have looked good themselves and just been on the tad off side of getting better results.

Saturday starts with leaders Bays Utd hosting Powell River at Oak Bay High. Bays will look to stay atop the division standings, and Powell River look to bounce back after a Lakehill drubbing.

Travel will be a factor, and I’m pretty sure there is no lack of motivation from the Villa contingent.

Saturday night will close out with Vic West hosting Juan de Fuca. Vic West will look to bounce back after narrowly losing to Cowichan last week, while JDF will look to build from their impressive battle against Gorge.

Sunday will see the weekend wrap up in Duncan as Cowichan host Mid Isle at the Sherman Road Turf. Mid Isle will look to bounce back from a tough couple weeks to start the season. 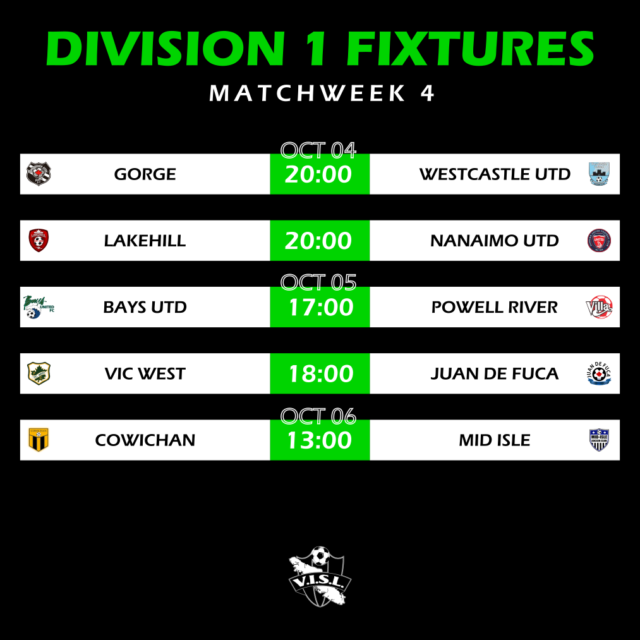