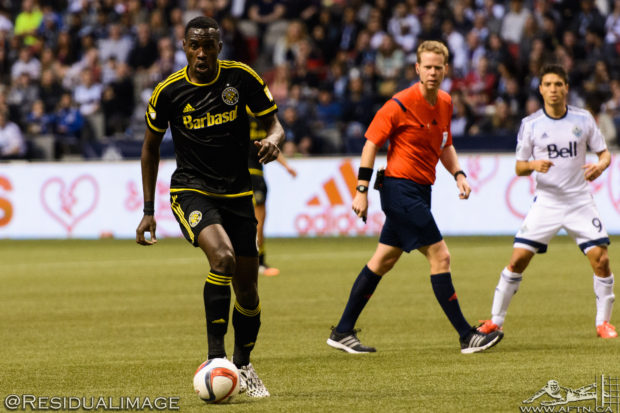 It was a blockbuster trade, and one that, for many people, came completely out of the blue.

When Vancouver Whitecaps traded winger Kekuta Manneh to Columbus Crew for defensive midfielder Tony Tchani, $225,000 in Targeted Allocation Money, $75,000 in General Allocation Money, and a future draft pick or cut of a subsequent transfer fee, it felt like a major moment in the Whitecaps’ MLS history.

Kekuta Manneh was one of the faces of the team. Literally a poster boy for the club. If he could be traded, then no player was safe here.

For the players involved, the move was also a surprise. Both had inklings that their futures probably lay elsewhere, but the speed of how things played out was definitely unexpected to both Tchani and Manneh.

“[It was definitely] a bit of both,” Manneh told AFTN. “We tried to negotiate a contract and it fell through. We didn’t agree on terms. It was my last year and just from past experience of what happened with Camilo moving on it was in the back of my mind that there was a chance that the Whitecaps weren’t going to gamble and they’d try and get something out of it.

And he was right. The writing was on the wall and when he wasn’t part of the teams for some of the most important games to start the season, there was only going to be one end outcome in his mind.

“I didn’t play in Mexico, the CONCACAF game,” Manneh explained. “I didn’t play in that game and it was supposedly the biggest game in the Whitecaps history, so I started to ask myself questions, so I came to the conclusion that there’s definitely something. They’re definitely trying to move me. There was no reason for me not to play that game.

“The following game we played Toronto and I only played 16 minutes. I came to the conclusion that definitely something is happening here. I might be getting traded. Then on the Wednesday I wasn’t in the first team that was going to face the Galaxy. After training I wasn’t asked to do any extras or anything. So, left alone and from then I knew, within a week I’ll be gone.”

While Manneh hadn’t had any direct discussions with Carl Robinson about moving on to pastures new, that hadn’t been the case with Tchani and Gregg Berhalter. Like Manneh, Tchani was expecting to move on from Columbus, but he had no inkling as to where that might be to or how soon it was to come about.

“It was something that we talked a little bit about,” Tchani told AFTN. “I asked the coach what my situation was. If the case was that he didn’t see myself as a contributor, I told he should either move me or choose something good for me. I was waiting for it, but I wasn’t sure it was going to come so soon.”

The moves have had different outcomes for each player. While Tchani has become a key part of Vancouver’s top of the table team and a regular starter, Manneh has been left on the fringes in Columbus and hasn’t played a minute in three of their last four matches.

“Everything’s going pretty quite well,” Tchani told us. “The first few weeks was a little bit tougher because coming from Columbus and being in Vancouver it was adjusting to a new city, a new club, and I think so far, so good. All the guys, all the coaches, they welcome me with open arms. Everything is going well so far.”

That’s not the feeling Manneh exudes. 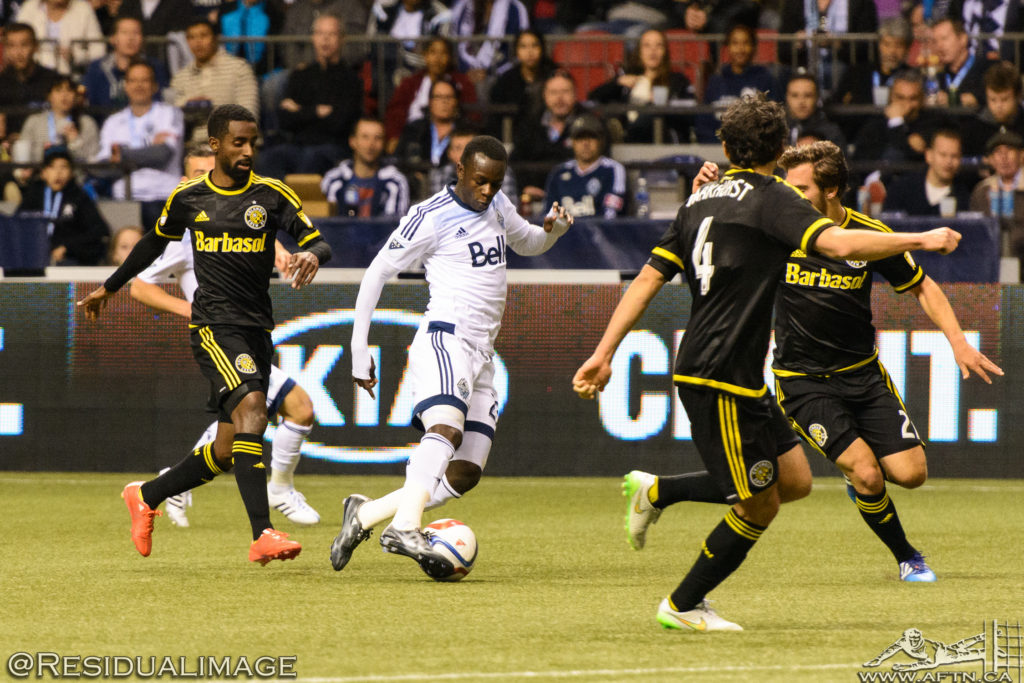 Both players have contributed when they have played. Both have three goals on the season. But while Tchani has made 22 appearances, 21 of them starts, and clocked up 1672 minutes for the Whitecaps since April, Manneh has appeared only 14 times for the Crew and only made eight starts, clocking up just 680 minutes since the trade.

His fitness levels have been criticised, something he still doesn’t agree with, and he’s had to bide his time and try and take his chances when they come. With three goals and two assists for the Crew this season, it feels like he has. Berhalter seems not to agree, and that has left Manneh feeling frustrated.

“It has been frustrating,” Manneh admits. “I’ll say when I first came here it was maybe more frustrating than it is now because coming here I expected to play. I thought I was going to play right away and that wasn’t the case obviously. It is frustrating, but one thing I came to realise about myself is that I’m a very patient person.

“Not necessarily score and assist some games but I thought I played very, very well. Sometimes decisions don’t go your way, but the manager looked the other way. Sometimes that’s how it goes. I’m still going to fight and hopefully I get some time in Vancouver. I’d really appreciate that.”

Now, for the first time, both players are getting set to face their former teams when Columbus Crew head to BC Place on Saturday. It’s a match that’s bound to bring it’s own set of emotions for not just the players, but the supporters. Seeing Manneh in yellow and black, and Tchani in blue and white will be a strange sight for many.

But for Tchani it’s not a big deal. He doesn’t see the match as being Tchani versus Manneh, simply Whitecaps versus the Crew.

“Not really,” Tchani tells us when we ask if it’s going to be an emotional afternoon for him facing his former team and teammates. “Every time I play, every game to me, is just like all the other games. Not because I’m playing against Columbus that I’m going to try and do too much. I feel like sometimes when you put pressure on yourself you don’t play your best or you don’t play your best.

“It’s not about me against that team or Manneh against them. It’s the same thing. People might thing, oh you’re playing against your former team, you have to do something special. No. It’s not about me, it’s about the whole team raising our game and trying to win. That’s all that matters.”

Again, things are a little different for Manneh. Vancouver were his first professional club. He still has a lot of friends here, both on and off the pitch, and many happy memories. Manneh headed along to the ‘Caps game against Minnesota on Wednesday night, chatting away to everyone and with a big smile on his face all evening.

He’s delighted to be back and is simply hoping he gets some time on the BC Place pitch one more time.

“It definitely will be different,” Manneh told us. “I’m excited. I think it will be fun. Hopefully I get the chance to play in front of the amazing BC Place crowd, the best fans in the league. For me, that’s the best part about the trade. That’s what I’m looking forward to most. Playing in front of that crowd.

“I had the opportunity, and I’ve been lucky, to be there for about four and a half years and I can’t wait to do it one more time with a different team.” 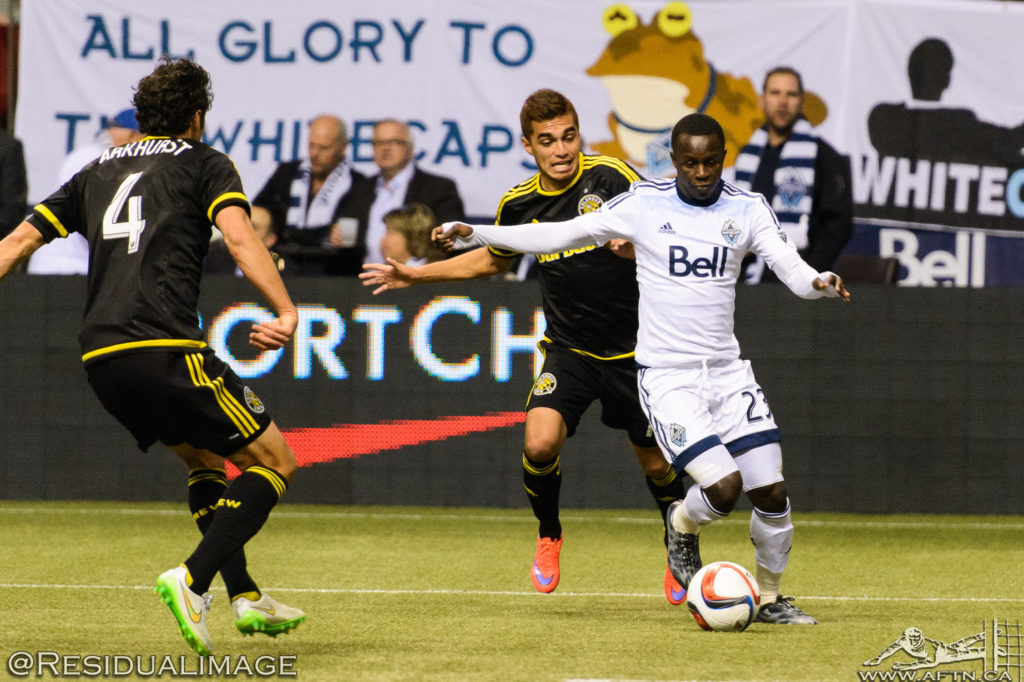 But for both players, whatever the emotions may be before, during, and after the game. This is just one match on their way to a much greater goal – making the playoffs and lifting the MLS Cup.

And both Tchani and Manneh are liking how their respective sides are looking in that quest right now.

“For sure we do,” Tchani says of Vancouver’s playoff chances. “You can see in these past few weeks, especially when we’ve had three games in a week and we mix it up a little bit. We have guys coming in and playing well, we have guys maybe starting their first games here, we have guys coming back from injuries.

“For so many reasons, you can see that the guys are willing to work. Training is very hard. We’re working hard for each other. We’re pushing each other. That’s really good because you never know, something can happen. We can have an injury, we can have a suspension.

“We have a team. It’s not just about one or two guys. I always believe is about the 11 and possibly 18 players. Or maybe 22 players because we are all training and they are the guys pushing us. They are raising our game and we are pushing them in case they have to step up.”

Vancouver has had a mixed start to the season. The same is true of Columbus. Both teams now find themselves on the back of a five game unbeaten run and seem to be hitting their stride at the right time.

And while Toronto may be running away with the regular season in the east, Manneh is confident Columbus can make a real challenge to them in the playoffs.

“I think we’re all very, very confident here,” Manneh said of Columbus’ chances down the stretch and in the postseason. “The quality here in some of the players and the system and the way we’re going to play/ Once we get it down to a tee, I don’t think there’s a team in the league that’s going to stay with us or stop us achieving our goal.”

“If we can keep everyone healthy and have everyone but into what we’re doing, I think we have a chance of winning the MLS Cup.”