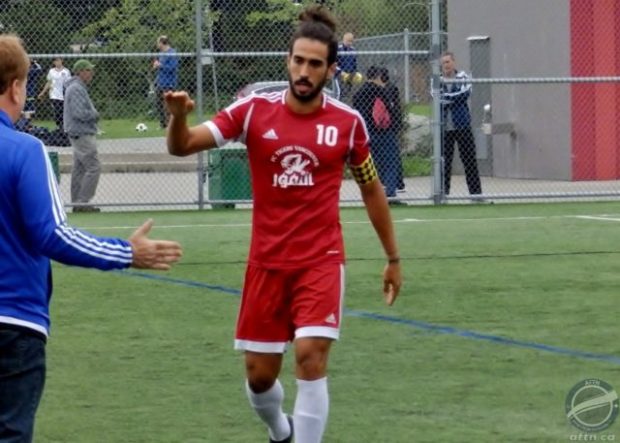 With CCB LFC United resting and recuperating after their Challenge Trophy winning exploits in Newfoundland, five matches were on the slate in the VMSL top flight last weekend, producing 22 goals and signalling an increasing gap between the top four and the chasing pack.

The top four all won big keeping it a very tight race at the top, with just two points separating the quartet.

Rino’s Tigers maintained their narrow one point lead at the top of the standings with a fairly comfortable 3-1 win at home to SFC Pegasus at Trillium Park on Saturday afternoon.

Farivar Torabi set the Tigers on their way, adding his sixth of the season 13 minutes in with an easy tap in at the back post, and that was how it stayed until the 70th minute when Pegasus’ Javid Khan tied things up from the spot.

Rino’s upped their pressure and went back ahead with eight minutes remaining through Daniel Johnson. That already made the Horsemen’s task tough and it was made worse moments later when Jora Saran was sent off for a second yellow.

The Tigers secured all three points with a second from Torabi in the 89th minute after a long ball saw him race in on goal and tuck it away for his seventh of the campaign and a 3-1 victory for Rino’s.

You can see highlights from the match below:

That win kept Rino’s lead at the top intact but breathing down their necks just one point behind are the formidable forces that are BCT Rovers Hurricanes and West Van FC.

After being blanked in his first four outings, Hurricanes player-coach Nick Soolsma has refound his scoring form and hit another hat-trick for the 2017/18 Premier champs in their 5-1 victory at Guildford FC FASA on Friday night at Burnaby Lake.

FASA actually went ahead eight minutes in through an own goal before the Hurricanes took over, blowing up a storm and levelling through Harneiv Jagpal in the 32nd minute. Soolsma hit his first of the night three minutes before half time to send them in to the break with the lead then added his second four minutes before the hour mark.

Shaihak Sundrani made it four in the 61st minute, before Soolsma completed his hat-trick with 15 minutes remaining.

That temporarily moved Hurricanes into first place overnight before Rino’s victory the next day, where they then dropped to share second place with West Van.

The Amblesiders saw off old rivals Coquitlam Metro Ford Wolves 3-0 on Saturday afternoon thanks to a 29th minute goal from Paul Kelly and second half tallies from Eoin McCormack and Michael Winter.

The last two matches of the weekend were played on Sunday at Burnaby Lake, and defending champs Croatia SC stayed in touch with the top three with a 3-0 victory over Club Inter EDC Burnaby, keeping them two points back of Rino’s in fourth place. Daniel Davidson hit a double, taking his tally for the season to six, with Theo Lorenz grabbing the other Croatia goal.

The weekend’s action was rounded off with NVFC Norvan’s 4-2 win over Burnaby Selects White Eagles. Yigal Bruk put in an outstanding individual performance to grab all four of Norvan’s goals, with Vladyslav Matlash extending his lead at the top of the scoring charts with his 9th of the season for the White Eagles, who also saw a goal from Mladen Ljumovic.

All of those results leave the VMSL Premier Division standings as follows after the week 7 action: 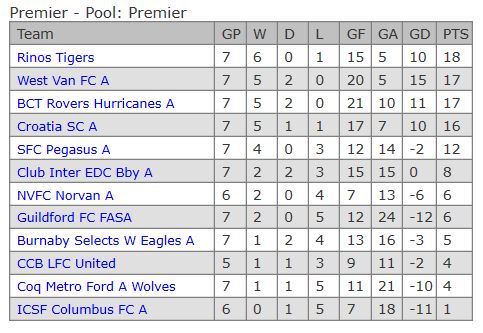 There’s six matches on the card for this weekend with the pick of the bunch being at Newton on Friday night as BCT Rovers Hurricanes host Rino’s Tigers. Should be a cracker and kick off is 8.40pm on Field 2.