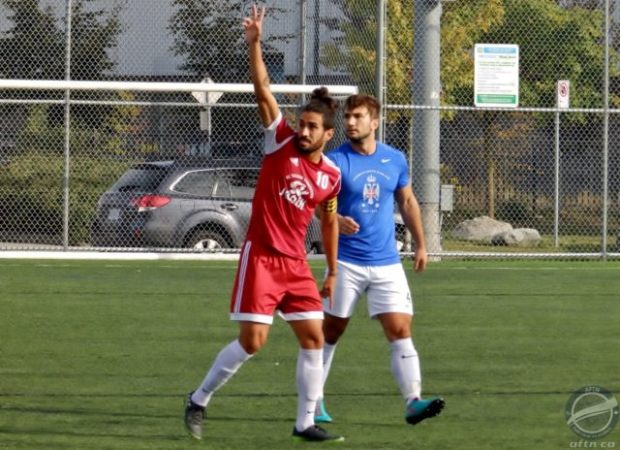 Week 3 of the 2019/20 Vancouver Metro Soccer League Premier Division season is in the books, and it’s been a surprising start to the new campaign at both ends of the table.

Three matches in and the top four all remain unbeaten, but there’s only two teams left now with 100% records. There’s a couple of big hitters propping everyone up at the other end of the standings, with BC Provincial champs CCB LFC United still searching for their first points of the new season, far from ideal for them with the nationals coming up next month and the gap from the top teams increasing by the week.

There were three games played last Friday night, with two of the unbeaten sides in action at Newton Athletic Park in Surrey.

Pegasus SFC have had a fantastic start to the season after some struggles last year, led by former WFC2 man Sahil Sandhu who made it three goals in three games to fire the Horsemen into a 16th minute lead against Coquitlam Metro Ford Wolves. Another former Whitecap, Yassin Essa, is back playing with Pegasus after a brief time away with CCB, and he struck his first of the season to give the Surrey side a 2-0 lead at half time.

Metro Ford made things interesting with a Vito Iacobellis goal just after half time, then hitting the bar through a Joseph Powell effort, but Pegasus added a late third to secure the three points, sending them to the top of the table and leaving the Wolves languishing second from bottom with just one point from their three games so far.

While that one was playing out on the stadium turf, there was a real barnburner taking place on the pitch behind, with Club Inter EDC Burnaby fighting back from being three down just 15 minutes in to storm back and take a point in a scintillating 3-3 draw with BCT Rovers Hurricanes.

Harneiv Jagpal set the Rovers on their way in the 10th minute, with Pavi Dhillon doubling their lead two minutes later. Jason Gill made it three in the 15th minute and it looked like it was going to be a long night for Inter. But they fought back magnificently.

Rizal Ganief pulled one back for the visitors just past the hour mark, with Alex Marrello giving them further hope when he reduced the deficit to one with 16 minutes remaining. And Inter’s comeback was completed three minutes from time when Liam Miller scored what had looked like an unlikely earlier an hour before.

A great point for Inter, and although the Hurricanes remain unbeaten, they’ll be left wondering how they let this one get away from them as they look to get the title back that they won in the 2017/18 season.

Last year’s Premier champs, Croatia SC, were in action at Burnaby Lake on Friday night in the division’s ‘Match of the Week’, with Provincial champs CCB LFC United the visitors. 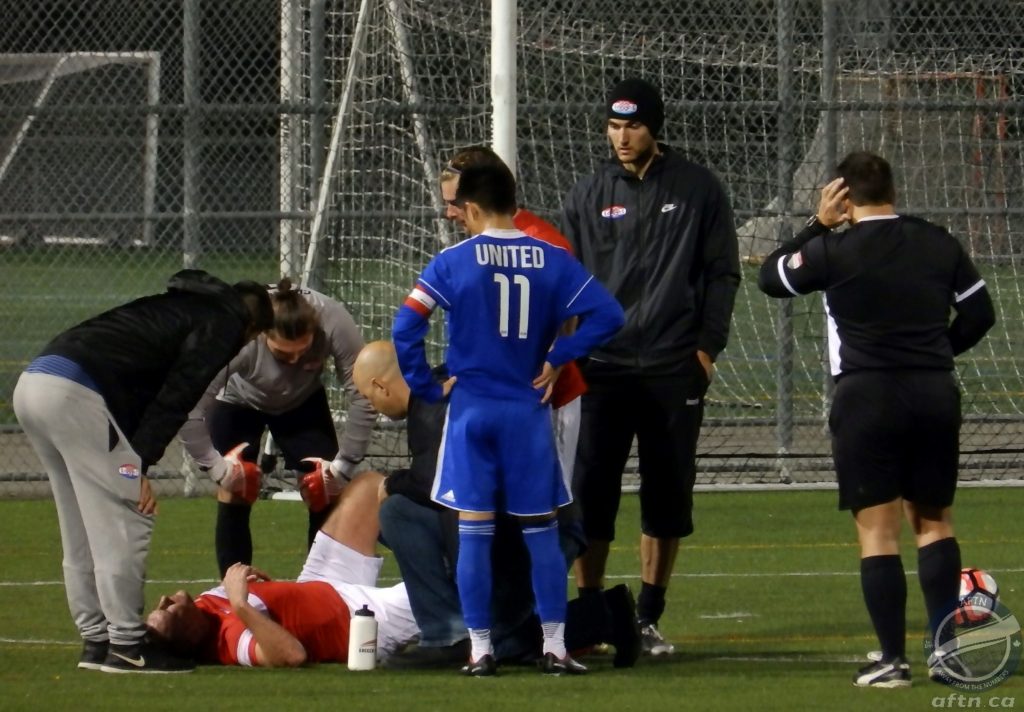 CCB came out strong, having a couple of early chances before Milad Rahmati got the ball in front of goal and made no mistake to fire the Surrey side in front eight minutes in.

Their lead was to last only 12 minutes before Daniel Davidson tied things up with a rocket from just outside the box just before the midway mark of the half.

Both teams came close to going ahead, with Croatia’s David Malamura coming the closest, curling one off the bar from a tight angle.

The half was brought to an early conclusion with three minutes left to play following a bad injury to a Croatia player, who had to be helped off the pitch.

CCB again came out strong to the start the second half, with Rylan Sangha’s dipping effort just falling over the wrong side of the bar. But it was Croatia who went ahead for the first time on the night when Emile Saimovici rose well to head home in the 54th minute.

The Surrey side looked for the equaliser and nearly found it when Kristian Yli-Hietanen fired into the side netting, but as they pushed for the tying goal, they were hit on a quick counter, with Saimovici grabbing his second of the night and Croatia’s third, firing home a cutback from just inside the box with 10 minutes remaining.

Things got a bit testy as the game wound down, with Croatia losing another player to injury, leading to some mild handbags at the final whistle, but it was a big win for the defending champs. CCB will certainly feel they should have taken something from the match, but instead they’re left looking for their first points of the new season and nine points adrift already of the league leaders.

You can see our highlights from the match in the video below, but be warned, we had some major focusing issues for this one in the poor lighting.

The last two unbeaten teams were in action on Saturday afternoon.

West Van FC hosted ICSF Columbus at Ambleside and the home team took the lead 15 minutes in through Michael Winter. It was a lead they were to hold till just after the hour mark when Adriano Negri fired the promoted lads level.

It was looking like both teams would have to settle for a point but West Van were then afforded the opportunity to grab all three when they won a last minute penalty, but Columbus keeper Kevin Monk came up with the big save to keep the score at 1-1 and earn his side’s first point of the new campaign.

Rino’s Tigers were made to fight hard to maintain their 100% record when they hosted Burnaby Selects White Eagles at Vancouver’s Trillium Park. 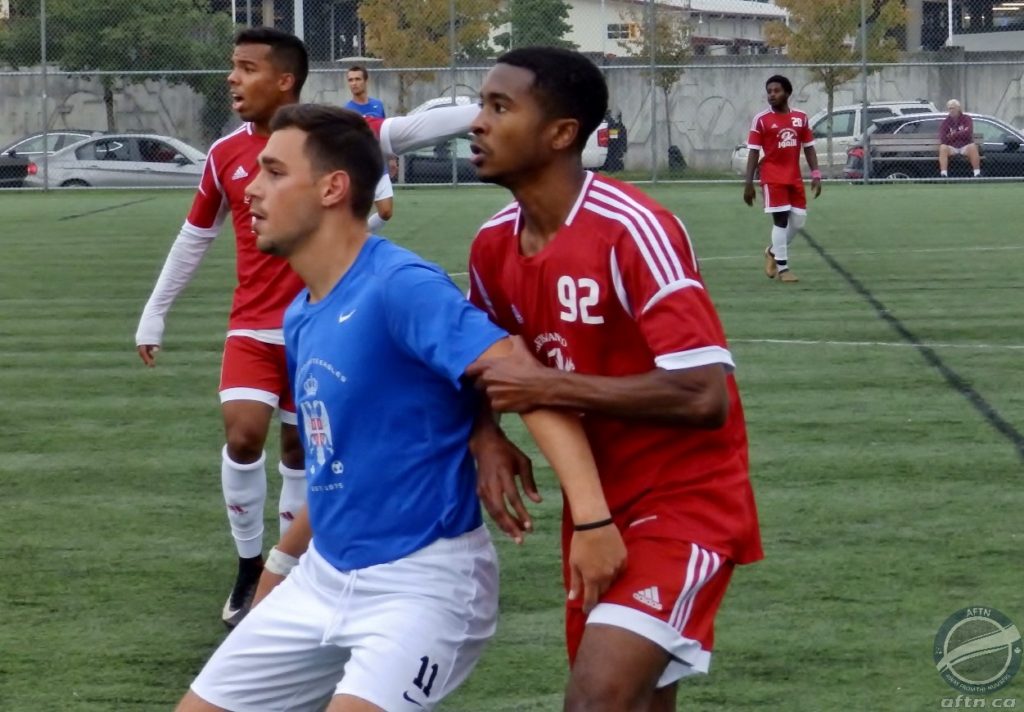 It was set up to be a battle between two of most impressive strikers in the early weeks of the new season – Tigers’ Farivar Torabi and the White Eagles’ Vladyslav Matlash – and they didn’t disappoint.

Both teams were in an attacking mood but it was the visitors who took the lead when Matlash lashed home a free kick in the 29th minute.

Rino’s came storming back though and Torabi leveled things up six minutes later when he rose to head home an Ismael Longo corner kick.

You felt either side could get the next goal and both sides had their chances but it was to be the Tigers who grabbed the late winner thanks to a quick breakaway from a White Eagles throw in. Logan Hooper quickly broke up the pitch and played in Torabi, who coolly finished to give Rino’s the 2-1 victory.

Norvan were not only looking for their first point of the new season but also their first goal. The latter came just five minutes into this one with Blake Burgon firing home the rebound after Yigal Bruk’s shot was initially saved.

Norvan missed a 20th minute penalty before Bruk did get his name on the scoresheet just before half time, doubling the visitor’s lead when he put away a Devan Delaney cross.

Brandon Bangambee grabbed a late consolation for FASA, who played well in the second half but fell to the 2-1 defeat.

All those results leave the league standings looking very interesting three weeks into the new season. 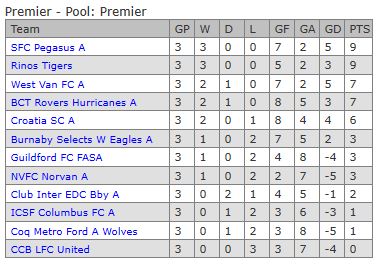 You can also find some more of our photos from this week’s matches (to varying degrees of quality and including some bonus ones from the Division 2 match between Harps and 13th Legion) over on our Flickr account and in the slideshow below. 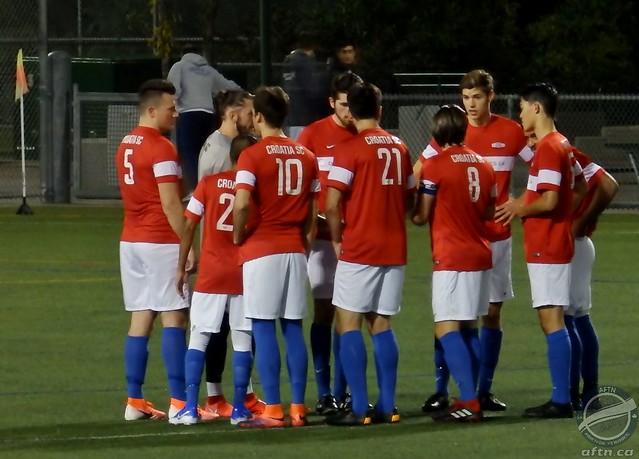