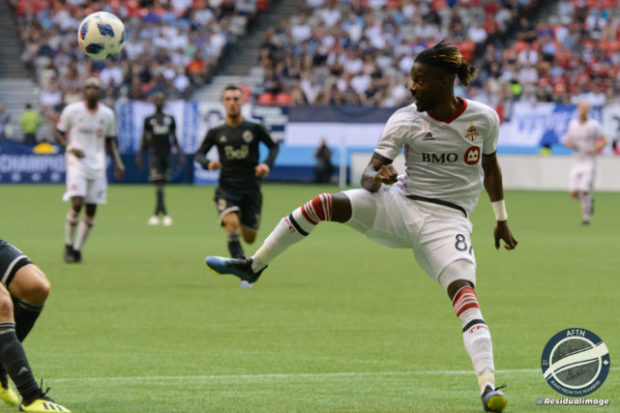 Tosaint Ricketts is back in Canada and ready to get going with Vancouver Whitecaps.

The veteran striker’s return to MLS came as something of a surprise last week after seven months away in Lithuania with A Lyga champions FK Suduva, but the desire to return home was always in his plans and when the ‘Caps came a calling, it was too much of an opportunity to turn down.

“It’s something that I always wanted,” Ricketts told reporters at Whitecaps training on Tuesday. “I was always interested in the Whitecaps since I left TFC. I decided to go to Lithuania to get some minutes, get some goals, get some playing time. But once the Whitecaps came knocking it was a no-brainer and I jumped right on it.”

Ricketts spent two and a half successful seasons at TFC, scoring 17 goals in 68 overall appearances for Toronto, while winning a MLS Cup and two Canadian Championships.

When TFC decided not to take up his option, Vancouver seemed like it would be a good fit for Ricketts. Marc Dos Santos had made initial enquiries, but the veteran headed back to Europe, where he has spent most of his career, landing with the Lithuanian champions Suduva and making an immediate impact, scoring 7 goals in 12 league appearances.

But while life on the pitch was business as usual for the 32-year-old, the other aspects of playing there certainly weren’t as easy.

“It was quite difficult,” Ricketts noted. “The language barrier was quite big on our team. We had a Russian speaking coach who didn’t speak English and spoke a little Lithuanian. So I had Lithuanian players translating me Russian to English, so the connection between me and the coach could get lost at times. But I did quite well through the adversity.”

FK Suduva were keen to maintain his services and Ricketts seemed very much part of their plans, as he travelled with the team for their latest Europa League qualifying match last week (a game they went on to win 2-1 without him). But then Dos Santos and the Whitecaps expressed their interest again and his transfer back home moved very quickly.

“I was in Israel preparing for a Europa League match against Maccabi Tel Aviv, probably the biggest match of the season,” Ricketts revealed. “I heard the night before the match that this is going to happen, so it was quite drastic. I had to act quickly and speak to the right people and get it done.

“It was quick. It was quite difficult. I was in Israel when I heard the news. I just had to make my way down here in two days. It was quite hectic, but we got it done and it was quite smooth. 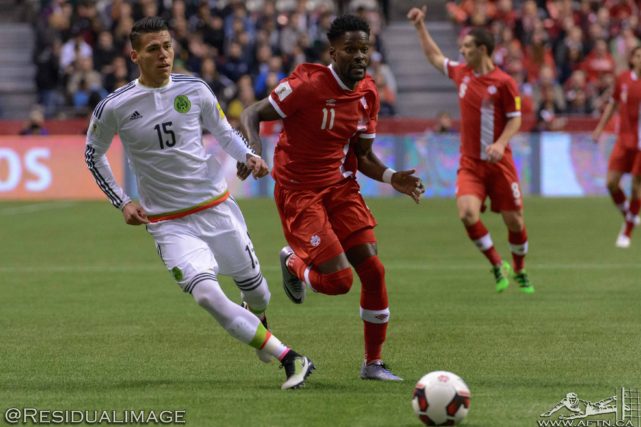 Ricketts is delighted with the move though and feeling “really good” to be back in Canada. He heads home full of confidence, ready to show the Whitecaps what he can do as he looks to make the deal longer than just till the end of the season.

“I scored a lot of goals [in Lithuania],” Ricketts said. “For any striker, goals is confidence. I’m familiar with the league. I scored goals for TFC and I’m hoping to come here and do the same.”

The Whitecaps will also be hoping for that. The offensive output from the team this season has been woeful. The ‘Caps 26 goal total is the worst in the Western Conference and second worst in all of MLS, just one ahead of FC Cincinnati and 39 less than leaders LAFC.

Fredy Montero leads the scoring on six goals, but four of them have been from the penalty spot. Yordy Reyna is next on four goals, and it isn’t a stretch of the imagination to see Ricketts leading the goals tally, at least from open play, by the time the season comes to an end.

That of course relies on him getting some better service that the current attacking core have been getting, and Ricketts is fully aware of the struggle it’s been for the ‘Caps this season.

“I’ve been following as much as I can,” Ricketts said. “The time difference makes it hard to watch matches but I try to catch up with the MLS app and what not. I know it’s been quite a difficult season but I know there’s been some bright spots as well and a lot of stuff to work on.

“I’m just here to do what I do – stretch the backlines, be dynamic, get on the end of those balls in the box and just keep the defenders on their back heels.”
Just what Ricketts’ role with the team will be remains to be seen. He may be a starter, or he may take that super sub bench role he pulled off very successfully in Toronto. Whatever Dos Santos is expecting from him, he’s here to deliver.

“We spoke briefly,” Ricketts said of his initial chat with the ‘Caps coach. “I think we’ll speak more now that it’s the first day. I’m excited to hear what he wants from me and I’m excited to help in any way I can.

“I’m the type of player that does anything for the team but I’m most comfortable up top, in the box, getting on the end of those balls. But I’m hear to do what I can to help.”

Ricketts took part in his first training session with the team on Tuesday, but despite the travel to get here and adjusting to a new time zone, he’s confident he’s ready to go the full 90 right away.

“I was getting a lot of minutes in Lithuania,” Ricketts said. “Due to the travel and everything, it’s an adjustment with time, but I’m ready to go. I’ll give everything I can, as many minutes as I can, as hard as I can. I’m ready.”