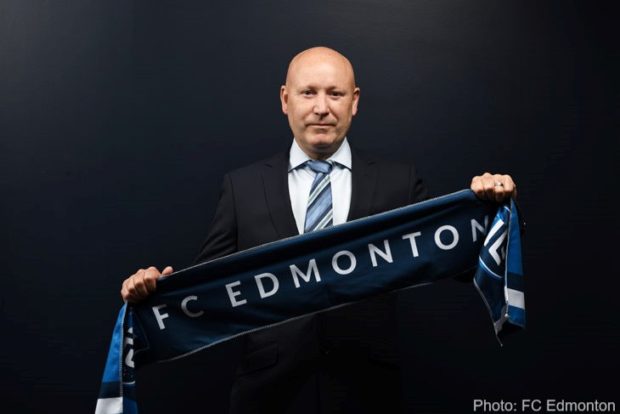 It’s an exciting and crucial time for the club, and on Monday I had the chance to speak with manager Jeff Paulus about the upcoming game against Cavalry, the performances by Easton Ongaro, and on the state of the CPL as a whole.

There’s still a lot of the Fall season left to play, but the next big test for Edmonton’s championship game aspirations comes on Friday when they travel to Spruce Meadows for the latest ‘Al Classico’.

Cavalry have their Canadian Championship second leg match up with Montreal just two days before, but Paulus isn’t expecting any hangovers when he takes his side there on Friday night.

“Even with the added meaning to the game against Cavalry, with it being a local derby, I’m treating it like any other game,” Paulus told AFTN. “And the team has to approach it with the same mentality and look to get a result from the game.

“Even though Cavalry are playing the Impact two nights before the match, we cannot take the game lightly as Cavalry have a lot of good players at their disposal and Tommy [Wheeldon Jr] is excellent at rotating them, and the young players will be hungry to impress their manager and get more game time.”

Paulus has been pleased with the start his team have made to the Fall season, but he’s certainly not taking any of it for granted or underestimating the task ahead to stay at the top of the standings and the areas in which Edmonton need to improve.

“We haven’t earned the right yet to walk into any stadium and expect three points,” Paulus stated. “We have to continue to outwork teams and to capitalize on the chances that our side are getting.

“Our team has to be better at set-pieces. With the parity that is in this league, with any team being able to beat another on any given night, every set piece is essential and could make or break a game, and with the size we have at our disposal it gives us the advantage.” 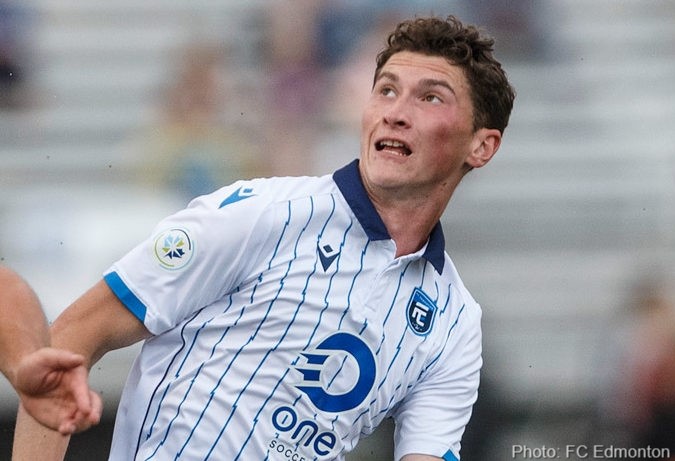 One of the rising stars for Edmonton has been Easton Ongaro (pictured above>, who has been on a tear over the last three games scoring four goals. The 21-year-old has been impressing many with his performances, but it hasn’t come as a shock for Paulus, who has seen him perform for a number of years now.

“He hasn’t been a happy surprise,” Paulus said. “He is a rare breed having his size, speed, strength, footwork, and the ability and willingness to take players one on one.”

And as delighted as he has been with the praise coming Ongaro’s way, he also offered word of caution.

“The club has to shelter the young striker as he is barely scratching the surface of what he can be,” Paulus added. “The club now has to do whatever they can to help him reach that potential, and I believe we are the club to do that.

“Having Tomi [Ameobi] will be a great help to the young man as they are both similar players. With Tomi not being a small man himself standing at 6’4 and with Tomi being a true gentleman in pro football, I expect him to be a great mentor for the player.” Edmonton born Ongaro was selected 15th overall by Cavalry FC in the first ever U Sports CPL draft last November. When Cavalry didn’t end up offering the University of Alberta a contract, Paulus made his move.

“Tommy would have been hard-pressed to find him a place in his side,” Paulus revealed. “So in doing what’s best for the player allowed us to sign him as we were prepared to use him in a first-team role. While Tommy and I are rivals on the pitch, we both want to do what’s in the best interest of the player.”

While Ongaro has been getting the headlines of late, a couple of players have been missing for Edmonton. South Korean midfielder Son Yong Chan, who has been out since the 1-0 win against Forge on June 26th, and Spanish defender Ramon Soria.

“Son is about a week away from being able to participate in training and a few more after that before he will see any game action,” Paulus told us. “Ramon Soria missed the last game due to a knock that he picked up in training, but it was not anything serious.

“If it was a final he would have played, but with the depth we have at the club with Edem [Mortosi] and Ajay [Khabra] we’d rather not risk it, but he will be ready for Friday.”

The first CPL season isn’t even four months old yet, but what the league will mean for the future of Canadian football is already developing, and Paulus is more than delighted from what he’s seen of it to date.

“The league has surpassed my expectations,” Paulus said. “With the competitiveness being at the same level as the NASL, a league that had existed for a few years and the CPL only being four months old.”

It’s not all been perfect, but it’s been a pretty successful first couple of months for the CPL with the success that Forge are having in the CONCACAF League and Cavalry are experiencing in the Voyagers Cup.

“Forge is doing a fantastic job with the competition,” Paulus admitted. “And I’m not surprised with how Cavalry are doing in the Voyagers Cup as they are a great side. With the away goal that they scored in the first leg against the Impact, they have a good shot of making it into the final.”

It’s all still early days of course, but does he feel that the CPL will do more for the development of Canadian football than MLS? It’s certainly been a talking point among supporters but Paulus defended the MLS clubs.

“They have done great for the sport in Canada, pumping massive amounts of money into developing young Canadian players and increasing the sport’s popularity in Canada,” Paulus believes. “Especially with TFC winning the MLS Cup in 2017. However, the CPL will do more for players as many young Canadians are playing 90 minutes a match and in 3 to 4 years, with the 28 game schedule, they will have over 100 pro games under their belt.

“You see what Pacific are doing, bringing their youth players into the fold, and we so far have accumulated 750 U-21 minutes between Easton, Marcus, and Doe, and with other players like Prince Amanda training with the first team and two other academy kids who have been training with the team over the summer months. The CPL will help these kids develop even with the 22-year-olds who don’t count towards the 1000-minute requirement.”

In talking with Paulus, he said what I thought were some interesting things, especially around Easton not being a happy surprise as I don’t think many people thought he would be this good this soon. Paulus has proved that he is and it seems now that they are trying to shelter him as much as the Whitecaps did with Alphonso Davies.

Trying to keep as much pressure off the young man as possible to help him properly grow as a footballer and trying not to let the quick success get to his head as he could go through a bad string of games which like Paulus said is why it’s great to have guys like Ameobi in the side who play a similar style to the player and have been in the game for a long time.

Paulus also showed through this interview that most CPL managers want to do what is in the best interest of the players. As this league, while being competitive, wants to give young Canadians a chance to develop in a pro-environment so that they can improve Canadian football as a whole and raise its profile even more.

We can even see the way Paulus and FC Edmonton are trying to develop Canadians by using seven Edmonton players in their starting line-up last game against Pacific, which they won 3-1.

Seeing this desire to develop local talent and help them reach their true potential as a supporter makes me want to support this club even more and will make for a great round three of this year’s Al Classico this Friday at Spruce Meadows.