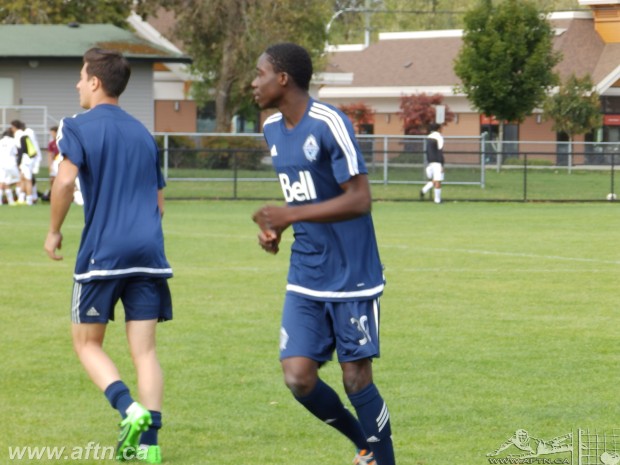 Vancouver Whitecaps preseason trip to Tucson has been full of talking points so far.

Christian Bolanos has finally joined up with his new teammates, Blas Perez is with the squad as an, ahem, invitee, and the ‘Caps notched their first win of the year with a 2-1 victory over Seattle Sounders on Wednesday, thanks to a Darren Mattocks double.

Amidst all that excitement, and going a little under the radar, was the Whitecaps first team debut in that Sounders match of 15-year-old Residency striker Alphonso Davies.

Let’s just let that sink in for a second. Even with Carl Robinson’s penchant for building a young team, that’s a fairly remarkable feat, especially when you consider that Davies only turned 15 on November 2nd.

Davies came on as a second half sub, playing the final 29 minutes of the match. He didn’t look out of place, and hasn’t throughout the whole of the Whitecaps preseason camp so far, even bouncing back after being forced to leave the pitch with a bloody mouth.

Making that debut is a moment Davies will never forget and neither will the faith shown by Robinson in the youngster.

“It was very overwhelming,” Davies admitted to AFTN when we spoke to him by phone on Thursday. “I never thought at 15 years old I would be playing with Vancouver Whitecaps’ first team. It’s a really, truly honour that they believe in my skills and my role that I can compete at this level.”

It’s certainly been something of a whirlwind ride for the Edmonton native after moving out west to join the Whitecaps Residency program last August.

After an exciting youth career with Edmonton Inter and Edmonton Strikers, Davies was invited to trial with the Whitecaps last summer. His skills were evident very quickly (as you can see in his video below) and the ‘Caps invited him to Vancouver for residency.

Making such a move at a young age is always a daunting one and Davies admits it was a hard choice to uproot, especially for his family, but it’s one which has already started to reap the dividends.

“It was a tough one, especially for my mum,” Davies told AFTN. “She really didn’t like the idea at first and we talked about it. She’s really concerned for my schooling. Like how am I going to go to school and stuff, and focus, and she couldn’t keep track of me at school.

“It was a tough decision for my family, but once we decided to let me come, I’m really happy that my parents made that decision for me to come to Vancouver.”

Davies began the 2015/16 USSDA season with the ‘Caps U16s, moving up for some games with the U18s at the start of this year. His six goals in his 12 matches have caught the eye of the Whitecaps coaching staff, with him and Alan Camacho Soto (who has 13 goals in 20 games) tearing it up and sending the U16s to the top of their Northwest Division.

It was enough for Robinson to call the youngster into the MLS team’s preseason camp. So how did that come about?

“I think it was a couple of weeks into January, when I started playing with the U18s,” Davies told us. “When we had training, later that day they called me and said ‘congratulations, you’ve been called up to the first team preseason’. I was really excited.”

The plan was always for Davies to head down to Tucson, so that the ‘Caps management could see how he fared in a professional environment and around the older guys. Very well as it’s turned out.

His debut went well and gave a good indication that Davies is certainly not out of his depth at the higher levels, although obviously with a lot of development still ahead of him. And he’s already learned a lot already from being with the first team and playing against some of the Sounders top younger talent and some MLS vets.

For those that haven’t seen Davies play, it’s clear that he has an abundance of talent. Honing that now in a professional environment is the next step of his development. He can play up front or on the wing and has already been involved with the Canadian national team set-up from 13-years-old.

And when it comes to modelling himself on a particular player, well that’s an easy one for the Barcelona fan.

“I really like how Lionel Messi plays,” Davies told us. “I’ve been trying to copy his style of play, but the thing is that he’s a little bit shorter than me and my legs are long! So I have longer strides. I usually just keep the ball and use the pace that god gave me to get past players. My dribbling coming along really well.”

So the ‘Canadian Messi’ then will be our new nickname for him! I jest of course. There’s always enough pressure on Canadian’s up and coming talent without giving them such tags, but Davies does look like he could be an exciting prospect for the ‘Caps.

For now, Davies is just taking in all he can from the preseason camp. But the life of a rookie is never an easy one on such trips to Tucson, especially when you have Pa Modou Kah taking you under his wing (and strapping a Go Pro to your head!).

Life of a rookie. #VWFC pic.twitter.com/OuD7egG39X

Davies and Kadin Chung have been the subject of a few of the now traditional Whitecaps preseason rookie pranks. Don’t think we’ve seen the head shaving yet though!

“They told me it’s a rookie thing with whoever comes,” Davies laughs. “Other rookies have told me they had to do it, just do it, just go with it. If you come, they won’t make you do it again. So just do it, get it done, don’t ask any questions or they’ll make you do more stuff!”

The next few years are always the most important ones for such talent, as they move up the age levels and meet their older, more physical opponents. Can they cut it? Will their body develop the way it needs to? Will their skills continue to grow along the way?

It’ll be an exciting journey to follow and Davies feels he couldn’t be in a better place to take it, playing at a football club, and under a head coach, that has consistently shown that they want to give their younger players a chance.

“I really like that,” Davies told us. “Coming to this club and getting minutes as a youngster is really exciting. It can make me develop my skill quicker, instead of waiting and waiting until I’m like 20 or 21 to start playing my first game.

“I really like that [Carl Robinson’s] playing younger players early, so we can get the experience and see how everything is and go back and work on that and show them what we have.”

As Robbo always says. He gives these young players their chance, then it’s up to them to grab it with both hands. Davies knows that and I’m pretty confident this won’t be last time we’ll be hearing his name this year.