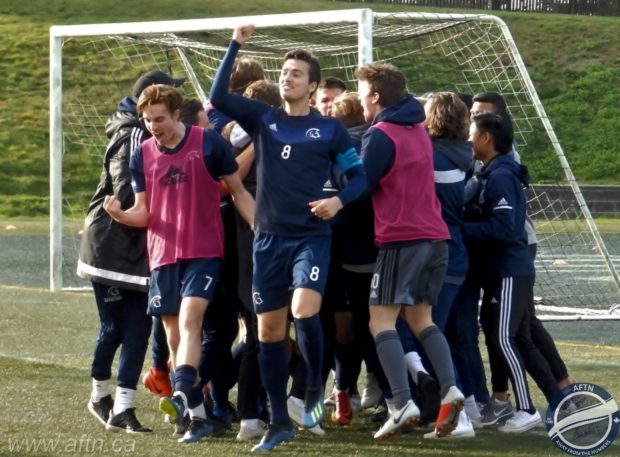 Trinity Western Spartans were left as the last BC school standing in a dramatic first day at the 2018 U Sports Men’s Championship in Vancouver.

The eighth seeded Spartans pulled off the day’s biggest shock, knocking off the top seeded York Lions on penalties, but the shocks didn’t end there in the battle between BC and Ontario universities, as the hosting UBC Thunderbirds lost in extra time to Carleton Ravens.

With two of the top three seeds now out of championship contention, it’s all to play for and Trinity Western will certainly feel that they have what it takes to bring home their first national title.

The Spartans got the 2018 U Sports championship underway in some style, overcoming OUA champs York 4-2 on penalties, after the match finished 2-2 after extra time.

But they made it far harder for themselves than they perhaps should have, blowing a two goal lead to a ten man Lions side that fought valiantly before the lottery of penalties proved to be their downfall.

Leighton Johnson gave the Spartans the lead after a goalless first half, swinging a corner straight into the net in the 54th minute to send the large travelling support from the valley into rapture. That joy was increased three minutes later when York’s Steve Kloutsouniotis saw a straight red for a tackle on Domenic Poletto.

When Noah Kroeker doubled Trinity Western’s lead just past the hour mark, they were in dreamland, and must have felt a place in the final four was well within touching distance. The previously undefeated York had different ideas though, and two goals in a four minute spell from Cristian Cavallini fired the number one seeds back level, stunning the Spartans.

With no further goals in the contest in either normal or extra time, the match headed to penalties, and after three players hit the crossbar, it was up to Cody Fransen to step up and fire home the winning kick from the spot, sparking jubilant scenes on and sending the Spartans into Friday’s semi-finals.

“It was a tough game in terms of the culture side of things,” Spartans head coach Mike Shearon said after the match. “To do so well to get 2-0 up and then all of a sudden, we just stop working. But Vagelli [Boucas] is a seasoned player, knows what it’s about and really held things together.

“The same with Caleb Johnson, who’s going to be one of our future captains. Those two guys held us together. It was just a matter of keeping plugging away and then they sat off. Then it was kind of comfortable, but unfortunately we couldn’t get it done in overtime.”

The two wobbles aside for the goals, Trinity Western’s defence was excellent in the match, led, as Shearon mentioned, by a standout performance by Boucas (pictured below), but as delighted as the Whitecaps Residency alumni was with the win, he knows there’s no time for resting on their laurels.

“I think in these type of tournaments, you’ve got to expect everything,” Boucas told AFTN. “Even if you’re up 2-0 with a man down, you’ve got to expect teams that can come back, because it’s a big tournament. You’re one and done and you don’t want to get knocked out. So my focus was we play the same way. We get the guys focused and we go forward again. Nothing changes.

“It’s exciting, but now we’re focused on the next one. Now we have a little bit of time to soak it in, but our minds are on the next one now and preparing for that.” 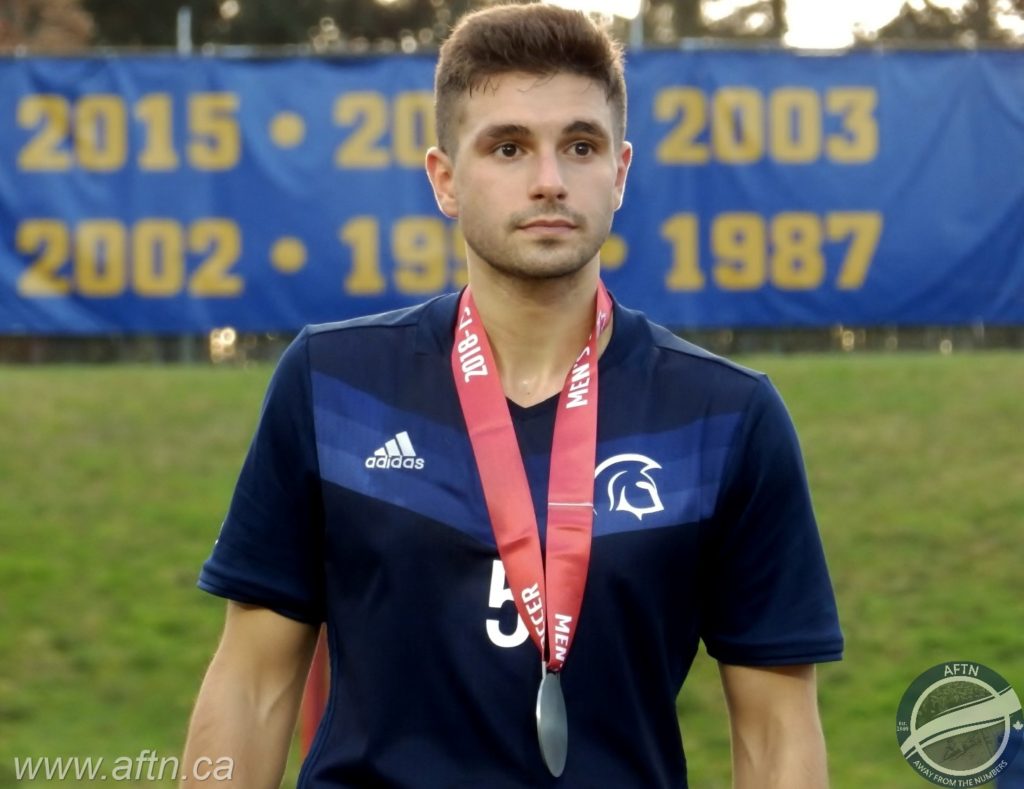 Knocking off the top seeds will clearly give Trinity Western a massive boost, but as the lowest seeded team coming into the tournament, they know they’ve got a fight on their hands if they want to make it to a first U Sports championship game since 2008.

“I’m extremely excited,” assistant coach, and TSS goalkeeper, Andrew Hicks told us. “I’m so happy for the boys. They deserve to be there and I can’t wait till tomorrow. I love this group of guys on the field. It doesn’t really matter who we play, we’re always going to be the underdogs, and that just suits us fine.

“Every team at this nationals is good. I know York was number one in Ontario and Carleton are on the other side, but every team’s going to be a good team, so now we just need to regroup and get ready for tomorrow.”

The Spartans are now guaranteed a medal match, and will be playing for at least bronze now come Sunday. As great as that is, naturally they want to be in with a chance of the gold. Standing in their way are Montreal Carabins, comfortable 3-0 winners over the University of New Brunswick Reds in Thursday’s second quarter-final after an impressive Frederic Lajoie-Gravelle hat-trick.

Shearon told us last week that he felt his team was one of the best in the country, capable of competing with anyone. They showed that in spades against York, with a victory that blows the top half of the tournament wide open.

“It does, yeah, and we do, but it’s going to be a battle no matter who we play,” Shearon agreed. “Montreal are a fantastic team. This is what tournament soccer is about. You’re going to play a good team every game. 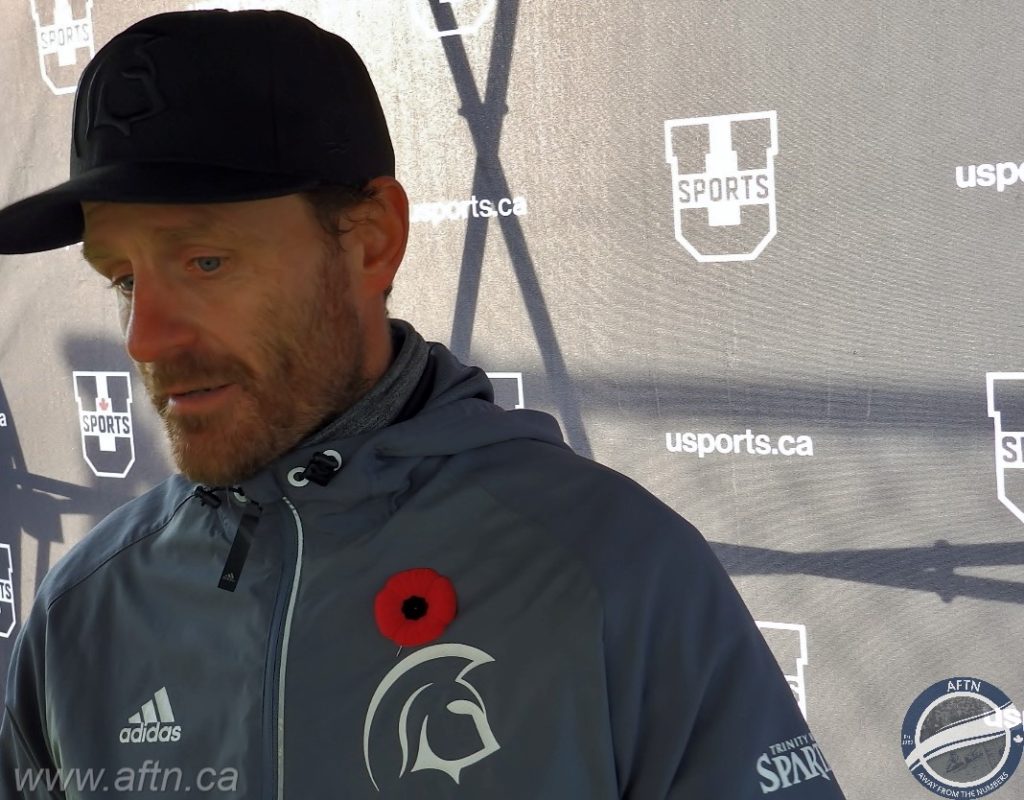 The bottom half of the draw wasn’t short of drama either.

Defending champions Cape Breton Capers were made to battle by a very tough to break down UQAM Citadins before an 81st minute penalty by midfielder Marcus Campanile gave the Nova Scotians a narrow 1-0 victory.

It was a match that lacked some quality in the final third, with both defences clearly on top, but the game exploded in the last ten minutes, with the winning goal, a sending off for the Citadins’ Janouk Charbonneau, and a lot of physicality as the Quebec side slowly unravelled.

“They set back very well, they seemed very organized,” Capers head coach Deano Morley said after his side’s win. “They had a lot of numbers behind the ball for a lot of the time in the game. It was just hard to break them down.

And after having very little to do for most of the 90 minutes, the Capers had goalkeeper Ben Jackson to thank for securing the win, with their big stopper coming up huge to keep out a last minute shot from Andre Bona when he was through on goal. A save which for Morley epitomises what Jackson means to his team.

“There’s a lot of lad that get a lot of recognition here ahead of Ben, and awards, and all-stars and things,” Morley told us. “Ben, in my opinion, proved it last year and continues to prove it. Good goalkeepers do the simple stuff and when you need them to make big saves, they make big saves.

“He’s got a great back four in from of him, so he doesn’t see much action, and when you need him, he’s there. That’s a sign of a very good goalkeeper.”

So not a perfect performance, but all that matters for the Capers is that they made it through, although they may have an injury worry over their impressive forward Corey Bent, who took an elbow to the back of the head in the closing minutes and who hurriedly left the field in tears with the help of some teammates.

Cape Breton won their first ever national title last year, and they’re two wins away from becoming back to back champions. Standing in their way aren’t the hosting UBC Thunderbirds as they may have expected, but instead it will be OSA runners-up Carleton Ravens.

Sixth seeded Carleton shocked UBC and stunned the home crowd with a 3-2 extra time win over the Thunderbirds, putting in another fantastic defensive performance, on a day where the backlines really shone throughout.

UBC dominated the first half, having two goals disallowed for offside, as Carleton failed to muster a single shot. Although the Ravens showed more in the second half, the Thunderbirds were sill controlling the play and launching wave after wave of attack, but couldn’t find a way to break down a Carleton side that had only given up seven goals over the course of the regular season.

And the Ontario side stunned UBC when they opened the scoring from out of nowhere when leading scorer Gabriel Bitar fired home a low beauty in the 74th minute. That sparked a frantic finish by UBC and they got their reward six minutes from time when Mackenzie Cole pounced on a Kristian Yli-Hietanen knockdown to blast home the equaliser.

With an extra 30 coming up in a fast paced and highly entertaining encounter, it didn’t take long for Carleton to retake their lead, with the impressive Christopher Malekos heading home a corner 63 seconds in. And when Bitar grabbed his second, and the Ravens third, in the dying seconds of the first half of extra time, that looked like all she wrote for the Thunderbirds.

UBC weren’t giving up on their championship dreams just yet and Connor Guilherme poked home one of the two goals they needed with four minutes remaining. But try as they might to get the leveller, there was no fairytale ending for the Thunderbirds, and a season that promised so much, came to a shuddering halt.

For Carleton though, it was a massive victory.

“First of all, Mosher and his team are an incredible side, very tough to play against,” Ravens head coach Kwesi Loney said after their hard fought win. “We knew that coming into the game. We knew it was going to be a battle from the beginning. Home field, host team, but we knew that coming in and we knew how to prepare for it. It was a just a matter of weathering the storm and taking our chances.

How big a shock this was is arguable. Carleton were ranked above UBC for most of the season, but fell down the nationals seeding by virtue of not winning the OSA championship, their only loss on the year.

This was a team that had scored 61 goals in the regular season and were always going to be a threat to UBC. It was a heartbreaking end to the Thunderbirds’ national dreams and it was written very clearly on the devastated faces of every player as they trooped off the pitch after the match.

Next up for Carleton is another tough battle against Cape Breton. Another match up of teams that can score but don’t give up many goals. Heading into a semi-final against the defending champions and on very little rest, it’s not the ideal preparation.

Trinity Western versus Montreal is the first semi-final up on Friday, and it’s sure to draw a large and boisterous crowd for the 4pm kick off. Cape Breton and Carleton is then scheduled to go at 6.30pm, only 20 hours after the Ravens secured their spot in the final four. Both matches should be crackers. Day passes cost just $15 and can be purchased HERE.