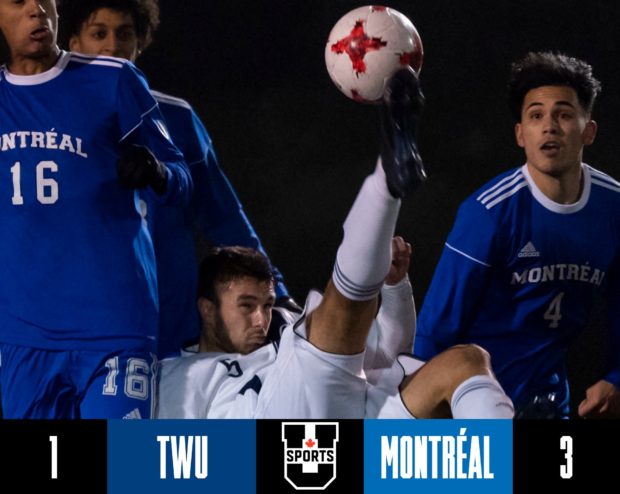 There were tears, there was disappointment, but there was a lot of pride and respect for Trinity Western Spartans after their heartbreaking 3-1 extra time loss to the Montreal Carabins in their U Sports semi-final at Thunderbird Stadium on Friday.

“I’m super proud of our players,” Spartans head coach Mike Shearon told AFTN after the match. “We talked yesterday about how proud I am and nothing changed today. Obviously the result changed, but the fight that these guys have, and the belief in one and other that they have, it was just unfortunate that we played a good team and it didn’t go our way today.”

After falling behind to a Frederic Lajoie-Gravelle penalty five minutes before half time, Trinity Western dominated the second half possession, throwing everything they could muster at Montreal to try and find the equaliser, while managing to keep the Carabins and their dangerous striker under wraps.

They needed a hero as the stoppage time seconds ticked by and it came in the shape of Whitecaps Residency alumni Vaggeli Boucas’ stunning bicycle kick, and a better goal you’ll struggled to find all weekend. Maybe even all month.

GOALLLLLLLL! Vaggeli Boucas ties it up for @TWUSpartans in the second half stoppage time to tie the game 1-1 with @Carabins.

The spectacular strike sparked joy both on and off the pitch amongst the Trinity Western faithful, sending the Spartans into extra time in the ascendancy. But their upwards trajectory was soon sent grinding to a halt when Guy-Frank Essomé Penda started and finished a quick counter four minutes into the first period of extra time, heading home a pinpoint Lajoie-Gravelle cross.

And Spartans hopes were finally crushed seven minutes later when the they gave up their second needless penalty of the match and Zakaria Messoudi made no mistake from the spot.

A deflating end for Trinity Western after their late heroics in normal time, and made worse by a hamstring injury to the talismanic Boucas that saw him leave the field on crutches forcing him to miss Sunday’s Bronze medal match.

But Montreal deserve a lot of credit for regrouping and showing their class, upping their game once more to get the job done all over again, and their head coach Pat Raimondo was naturally delighted.

“It was a great Canadian game, it was a great U SPORTS game,” Montreal head coach Pat Raimondo enthused after his side’s victory. “Trinity [Western] is a very good team. It was a high-level game, and exciting to be a part of it, and exciting to coach in this game. Both teams did well. My boys responded well in the overtime. It’s great for Canadian soccer.”

As in their 3-0 quarter-final victory over UNB Reds on Thursday, forward Lajoie-Gravelle and Moroccan midfielder Omar Kreim were the difference makers for Montreal. Lajoie-Gravelle’s movement and vision is exceptional, making him a constant threat to defences. 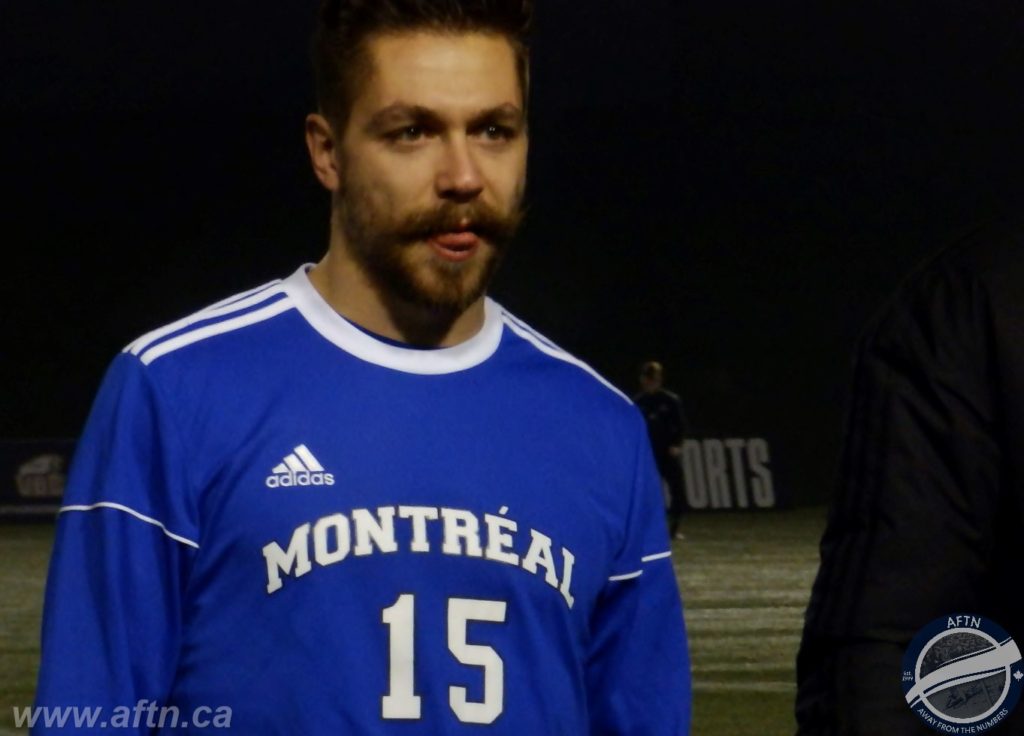 As the only senior graduating from the Carabins this season, you would feel Lajoie-Gravelle (pictured above) would be a shoe-in to be picked up in Monday’s first ever U Sports CPL draft, but as Raimondo explained, that doesn’t appear to be in the record setting RSEQ Player of the Year’s plans.

“He had his opportunity [as a pro], he was at the Montreal Impact with the USL team,” Raimondo told us. “There was a parting of ways there and he’s decided to go to school. He’s doing a Masters, so I think he’s going to finish his soccer career Sunday on the field with us.”

It was an emotional rollercoaster of a match for the Spartans, but now they have to pick themselves up and put their full focus into Sunday’s Bronze medal game against OUA side Carleton Ravens. Montreal meanwhile move on to the Gold medal game and a rematch of last year’s Championship match against the defending champs, Cape Breton Capers.

“It’s back-to-back finals for us, and we’ve been chasing the Sammy Davidson [Memorial Trophy] for 18 years now,” Raimondo added. “Cape Breton is a quality teams and well coached. It’s going to be a hell of a final, but we’re at the dance, so we’re going to recover now and we’re going to get there on Sunday.”

Carleton stunned UBC on Thursday night with a 3-2 extra time win over the hosting Thunderbirds, but that battle look to have taken a lot out of the Ravens and they were systematically dismantled 5-2 by a rampant Cape Breton side in the second semi-final.

Stuart Heath got the Capers on the board early, rising strongly to head home a Lewis White corner. Cape Breton had a couple of opportunities to add to their lead, but it was Carleton who levelled from out of nowhere from an excellent Ricky Comba header on the half hour mark.

The parity was to be short lived when Daniel Williams’ shot was deflected into the Ravens goal and that was how it stayed till half time, before the Capers took over in the second half, in a stunning display that didn’t once see them stop pressing, even after they’d put the game to bed.

The exciting Corey Bent grabbed the third in the 56th minute, with a beautiful first time finish, before Heath killed the game off with his second of the match, a looping header to the far post, in the 75th minute.

Both teams found the net in stoppage time, with Mitchell Wong first of all making it five past Carleton, before Tristan St. Pierre responded immediately with a stunning strike that stuck in the stanchion and make it a 5-2 final.

“I thought we executed a really well put together gameplan,” a delighted Cape Breton head coach Deano Morley told reporters after the match. “I’m more proud at this moment right now because after winning last year, going undefeated and being able to hit the reset button and put all the work in and go through the process… I’m really proud that we’re here right now and have a rematch of last year’s final.”

Montreal and Cape Breton went to penalties in last year’s Championship game and Sunday’s Gold medal encounter should be a cracker.

“They’re a very good side, a quality side,” Morley said of Montreal. “They’ve got some real dangerous players up top and I think they’re a senior side too and very mature. I haven’t really looked at them, I’ve been focused on where I’m at now, so I’ll go have a good look a them try to get organized. Two good sides. They’re direct, so we’ve got to be ready.”

The Bronze medal game, should also be pretty special, with a guaranteed raucous Trinity Western crowd in attendance.

The Spartans have a great opportunity to win a medal, and as disappointed as everyone is right now with the semi-final defeat, Shearon guaranteed they’ll use their rest day to get over it, prepare, and come out all guns blazing on Sunday.

“They’ll come out and they’ll give everything we have,” Shearon told us. “That’s the way we roll. That’s what it means to play for Trinity. We’re a family, we love one and other, and everyone’s more disappointed, not so much because we didn’t go on, but for our fifth years, this is going to be their last game on Sunday.

“We wanted them to go out with a championship, and that was what we were fighting for. Unfortunately, the best we can do is a bronze and so that’s what we’ll go for.”

The Bronze medal match kicks off at 11am at Thunderbird Stadium, with the Gold medal match following after at 2pm. Both matches should be great entertainment and day passes for both games cost just $20 and can be purchased HERE.